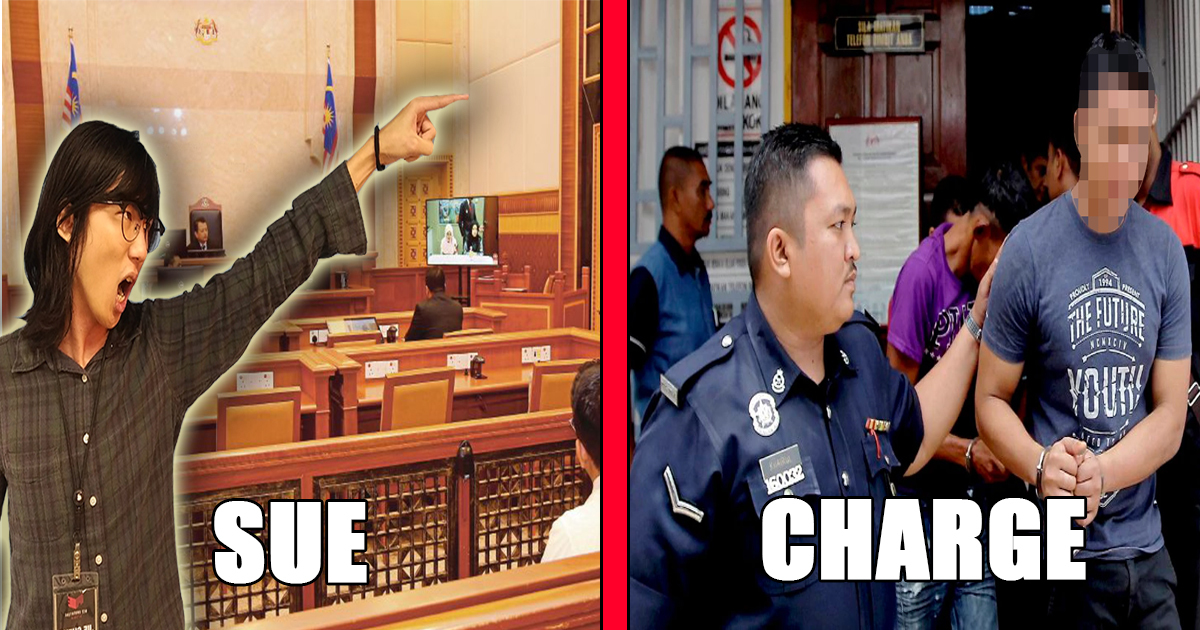 What’s the difference between getting sued and getting charged in Malaysia?

When someone gets on the wrong side of the law, you usually hear either one of two words used to describe what’ll happen to them - they either get “sued”, or get “charged”. For example, MP Chong Chieng Jen got “sued” by the Sarawak government, and DS Najib Razak got “charged” with money laundering.

You see these terms all the time but you also might not know what’s the exact difference between them. What types of wrongdoings would you get sued for and what would you get charged with? Here’s 5 main differences between the two.

You only sue someone for what’s called a civil wrong - which includes torts like negligence and breach of contract. On the other hand, a person gets charged for a crime - which is generally more serious like injuring people, breaking-in, cheating someone…

[READ MORE - Zahid Hamidi was CHARGED with money laundering.... But what does "charged" mean?]

You can see the main difference between civil and criminal wrongs as this:

As for why they are two different systems in the first place, it’s because…

2. One compensates victims, while the other punishes offenders

When you sue someone in a civil case, it’s usually to get compensation for a wrong they did you, for example, if you find a snail in your drink, you’d sue the manufacturer for negligence. The focus here is on “compensate”, meaning that the wrongdoer will have to pay you for any losses or costs you had to fork out - what the law calls “restoring you to your previous position” (as if the wrongdoing didn’t happen).

Criminal cases are more about maintaining a stable society by punishing offenders, and deterring other people from offending. It’s about stopping people who are threats to society, and showing a strong message that certain behaviours are unacceptable. For example, we lock rapists up and hang murderers to make sure they don’t continue harming others, and to deter other people from committing rape and murder.

Criminal laws have severe punishments because they work as a deterrent from committing crime. To use a ridiculous example, we might have a lot more murderers out there if the maximum punishment for murder was only a RM50 fine.

The government is the one that amends and updates the punishments for crimes from time to time, which brings us to the fact that…

3. Only the government can charge people with crimes (but you can still sue those people)

One pattern you’ve probably noticed is that pretty much anyone can sue, but only the police can arrest a person and bring them to court to be charged.

[READ MORE - Who is the Attorney General and what does he do?]

[READ MORE - How do criminal trials happen in Malaysia?]

Some wrongdoings have both a criminal and civil factor, and so you might both make a police report AND file a lawsuit against the offender. For example, if someone breaks into your house, you would make a police report for house-trespass (a crime under Section 442 of our Penal Code), and you could also sue the burglar for trespass to your property (but only theoretically, since you are unlikely to get any money out of him).

4. They have different standards of proof required

Whether you’re making a claim for compensation, or finding someone guilty of a crime, you’ll need enough evidence to prove your case. Because of the difference in severity, civil and criminal cases require different standards to be proven.

In civil cases, you only need to prove your case to win a “balance of probabilities”. This means you only need to prove that your version of the story is more likely to be correct, or closer to the truth (this doesn’t mean that you can make stuff up). If you’re the one suing, you also hold the burden of proof (the responsibility to prove something) - because you can’t go around accusing people of cheating you unless you can prove it.

For criminal cases, a case needs to be proven “beyond a reasonable doubt” since we’re talking about a slapping someone with a huge fine, a criminal record, and not to mention jail time. You could see “beyond a reasonable doubt” as being so certain that you’d happily bet your life savings. The burden of proof would lie with the prosecution (the government) as all suspects are considered innocent until proven guilty.

5. The penalties for getting charged are usually worse than being sued

The person losing a civil case has to pay compensation for injuries and damages they may have caused. In most cases, they’ll not end up having to pay more than what the damage cost (although they may also have to cover the victim’s legal fees). They might also get an injunction slapped on, basically stating they’re not allowed to do certain things. For example, if they were sued for playing electric guitar solos late at night, the injunction will say that they’re not allowed to do so in future.

As we’ve mentioned, crimes are usually dealt out by the government, and involves fines, maybe community service, jail time, and the death penalty for extreme cases. Although generally paying compensation is not as bad as criminal punishments, there are exceptions such as where expensive property is damaged, like... if a building collapses because the architects were careless. Another example where extremely high compensations are paid out is in defamation suits of high profile individuals, like when Tan Sri Vincent Tan sued some journalists for defamation, and was awarded RM7 million as compensation - because he stands to lose that much more from a stained reputation.

[READ MORE - If you win a lawsuit in Malaysia, how do you make sure you get paid?]

You cannot really run away from being charged, or sued

Not just criminals run away from the law, people who know they are about to be sued are known to run away, change their addresses and phone number, and probably move to another state (usually bankrupts). This is because, to sue someone, you need to personally serve them court documents called originating processes (writs or originating summons), which can be difficult if they don’t want to found.

But running away doesn’t help them, because you can use what’s called substituted service to tell them that you’re suing. If they fail to turn up after that, you can actually get a “default win”.

[READ MORE - If you want to sue someone in Malaysia, what happens if they ignore you?]