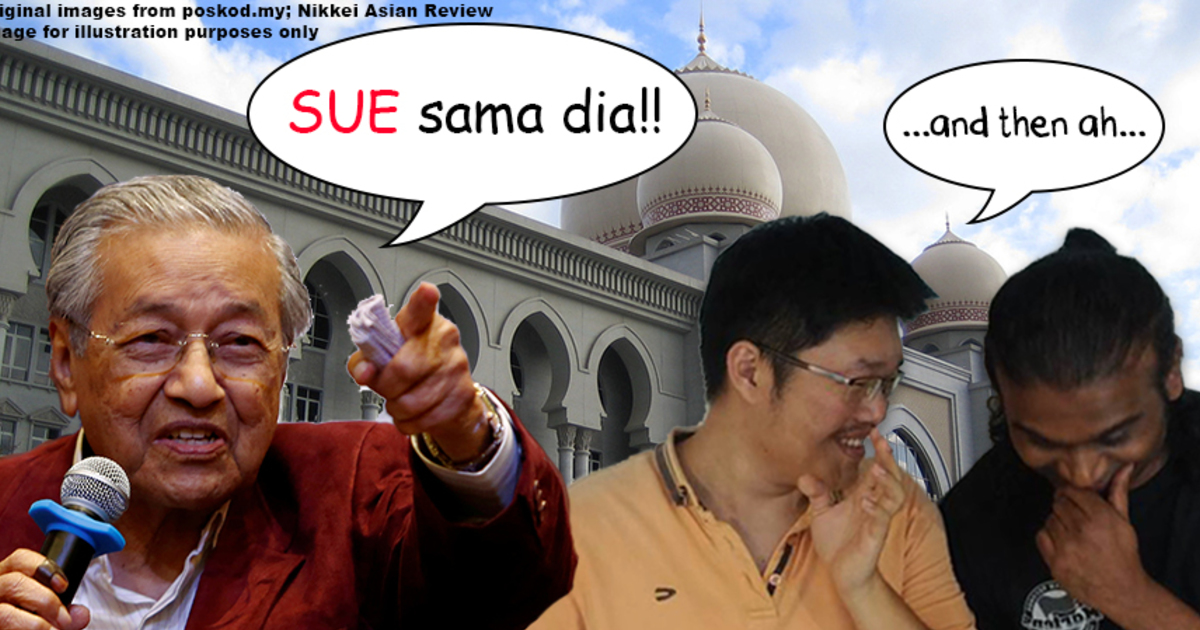 The Malaysian government can now sue citizens for defamation. But what's the big deal?

When the words “criticize the government” are mentioned in Malaysia, the knee-jerk response may be “sure kena sedition” based on past incidents over the years.

However, you might not expect the government to lawyer up and sue you for hurting the government’s reputation! Like how the Sarawak State Government sued Chong Chieng Jen (MP for Stampin at time of writing) for defamation back in 2012, after he published a press statement alleging that under the rule of the then Sarawak government, RM11 billion of the people’s money had disappeared into a “black hole”.

If you were following this case back then, you’d know that the the Kuching High Court decided back in April 2014 that governments in Malaysia are not allowed to sue people for defamation because of a certain principle in common law. Common law is in essence a unified system for judges to make judicial decisions back in the UK, which we’ve adopted here in Malaysia.

The principle in question comes from a UK case known as Derbyshire County Council v Times Newspapers Ltd, which is often referred to simply as the Derbyshire Principle.

Our courts have used the Derbyshire Principle before

In the UK case, Times Newspaper had published articles that questioned the legitimacy of Derbyshire County Council’s investments in a pension fund - so Derbyshire County Council sued. Spoiler alert: the court decided that governments should not have the right to sue anyone for defamation - although corporations and individuals in the government can still do so as long as it doesn’t involve their official standing. For example, a government servant can sue if someone spreads false rumours about their personal life, but they can’t sue a person for criticizing their practices.

The problem the court saw was that a government is democratically elected, and should be open to public criticism. If governments were allowed to sue people for defamation, there would be a bar on the people’s freedom to express their criticism, and the media would have to self-censor to avoid risking lawsuits.

The Sarawak government asked the Courts to reconsider…

The defamation suit against Chong didn’t end back then, because the Sarawak government appealed to our Court of Appeal in 2016. The appeal got the previous decision reversed, meaning to say that governments ARE allowed to sue for defamation in Malaysia because we have a written law that overwrites the Derbyshire Principle. The court even added that Chong should automatically be found liable for defamation as it was a previously decided matter.

Chong naturally wasn’t happy with that decision so he appealed against the appeal to the highest court of the land - the Federal Court.

This long-drawn case finally came to an end on 27 September 2018 as the Federal Court dismissed Chong’s appeal, agreeing with the Court of Appeal that the government is allowed to sue for defamation - although they said the Court of Appeal was wrong in not giving him a chance to defend himself.

What comes next might surprise you, because our courts have agreed with and applied the Derbyshire principle before!

When the former Pahang Menteri Besar, Adnan Yaakob, went after Utusan Melayu for defamation in 2014, his case was dismissed because of the Derbyshire Principle. This happened yet again when Lim Guan Eng sued Perkasa, New Straits Times, and Utusan Melayu in 2016 - the case was stuck out because it was held that the government has no right to sue for defamation.

Apparently, the interpretation of law was different in the Sarawak government’s case, which brought up a local law that conflicts with the Derbyshire Principle.

The Malaysian law that cancelled the Derbyshire Principle

That law was the Government Proceedings Act 1956, which states in Section 3 that:

“Subject to this Act and of any written law where the Government has a claim against any person which would, if such claim had arisen between subject and subject, afford ground for civil proceedings, the claim may be enforced by proceedings taken by or on behalf of the Government for that purpose in accordance with this Act.” - emphases added

That chunk of legalese basically says that the government is allowed sue for anything that a regular person would be able to sue for.

The Court of Appeal detracted from the Derbyshire Principle and went in favour of this law because our Civil Law Act 1956 states although we apply the common law of the UK in Malaysia, we can only do it in areas where we don’t have our own written laws covering the subject.

Therefore, since we have Section 3 of the Government Proceedings Act, it can overwrite the Derbyshire principle.

So why were the other politicians not allowed to sue?

The second thing you’re wondering is probably why the outcome was different for Adnan Yaakob and Lim Guan Eng, even though our laws didn’t magically change overnight.

Well, if there’s one takeaway you should get from this article, it’s that the law is usually not clearcut. One of the law’s broad aims is to solve injustice, so judges will sometimes take a “what’s the purpose of these laws?” approach in coming to their legal decisions, rather than just taking the law literally.

This comes from a UK case called Smith v Hughes from 1960. Six prostitutes were caught soliciting their services through windows and a balcony. There was a problem finding them guilty of soliciting because the law at the time said that it is an “offence to solicit a prostitute on the street or a public place”. The inside of a building is clearly not a public place, but the court still found them guilty by interpreting the law to see what kind of mischief it was trying to stop - the advertising of prostitutes.

Let’s take the Derbyshire Principle as well - the reason it was created was to prevent the government from stifling criticism by suing everyone left right and centre. But if the problem to be solved is that people are throwing wild accusations about the government to discredit them, the Courts may decide to place emphasis on the Government Proceedings Act instead; or maybe even consider differentiating that the government cannot sue for criticism, but are allowed to in the case of unfounded rumours.

Before your imagination runs wild, we should clarify that this doesn’t mean you can be sued by the government just for criticizing them, because a claim for defamation has pretty specific criteria to be successful. For example, you can’t successfully sue for defamation if what was said is in fact the truth, or merely fair comment on the matter (more on the criteria in our article linked below)

In other words, just because the government has the right to sue you, doesn’t mean that they will be successful in doing so - just like how if you have the right to sue a person, you still don’t know whether you will actually win the case.

But it’s not over yet

The Federal Court returned the case between the Sarawak Government and Chong Chieng Jen back to the High Court, to decide once and for all whether Chong will be held responsible for defamation.

The reason why the decision to allow the government to sue Chong was heavily criticized by legal commentators like the Malaysian Bar Council is ultimately related to the question of freedom of speech. However, like with most other laws, Parliament has the option of amending the Government Proceedings Act if they decide that this law is no longer relevant to the times and should be updated.

The case is currently still ongoing, and we will update this article when a decision has been made.