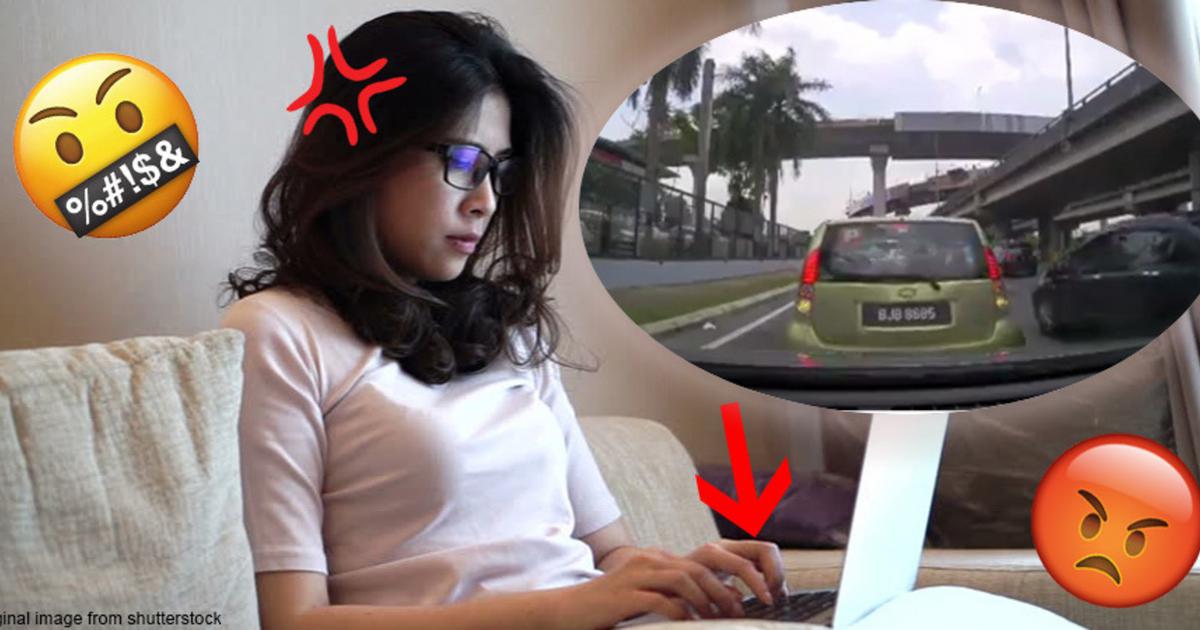 In Malaysia, shaming someone on social media could land you in jail

You’re out for lunch. You’ve just finished your usual meal and are walking to your car. Then you see this. 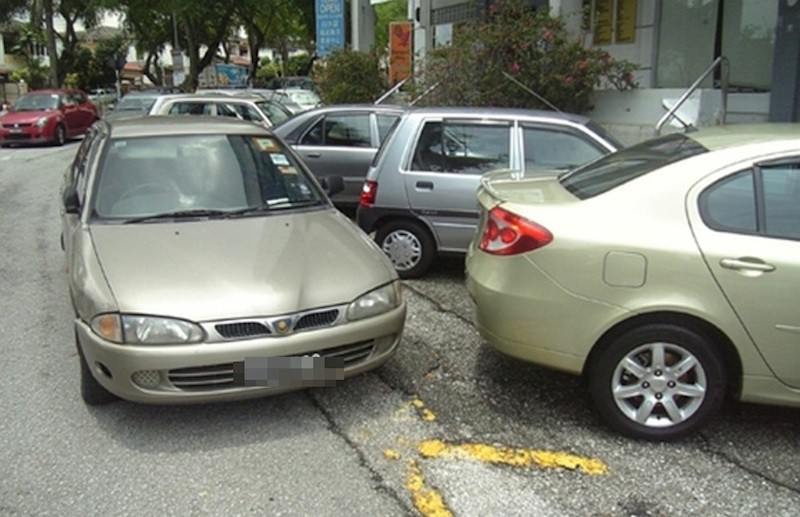 The double parker didn’t leave a phone number, and doesn’t rush over to your honking. About 15 minutes later, they stroll over casually. You’re angry and confront them, but they have the cheek to tell you off: “What’s your problem? Cannot wait ah?”

Furious, you quickly take a picture of the nasty double parker and their car before driving off. Time to post on social media and let the world know about this (insert swear words here) person!

Many of us take to social media to complain about nasty bosses, unreasonable boyfriends and girlfriends, the annoying double parkers, and everything else. But this keyboard warrior-ing could get you into big trouble with the law, especially if you don’t know what can and cannot be said.

[READ MORE] : 3 ways to get arrested for insulting a politician

That’s exactly what happened to 3 posters on the MMU confessions Facebook page, who got reported to the police and are now being investigated under Section 499 of the Penal Code for defamation. So, what is defamation and when are published posts considered defamation?

You can be sued for defamation 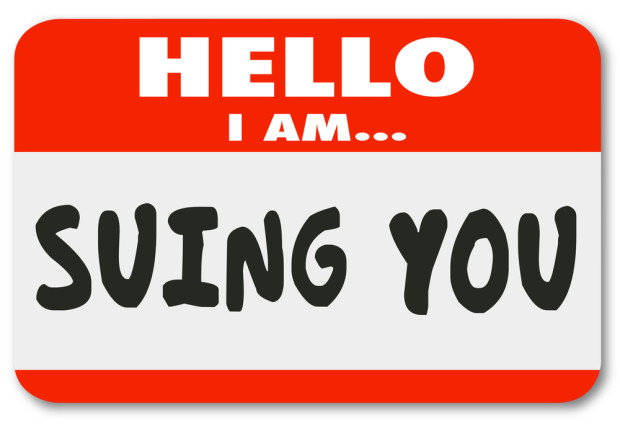 Simply speaking, defamation is a statement made to damage another person’s reputation. The victim can sue their defamers for compensation.

How do you prove that someone is defamed? According to the case of Ayob Saub v TS Sambanthamurthi [1989], there are 3 elements that must be proven:

2) The content of the material is about them or identifies them (whether it’s words, a photo, a song, etc.)

3) The material was published to people other than that person

Implied meanings or “innuendos” will also be considered defamatory. For example, if you say “Jerry goes to massage parlour X a lot” and it is known that the parlour provides “happy endings”, your statement can be considered defamation. Even if you don’t say it directly, it’s easy for people to conclude that Jerry has a rather “interesting hobby”.

No, it doesn’t matter whether you use their name or not...

A misconception a lot of people have is that it’s not defamation if the person is not named. This is somewhat true, but if there is enough information that they can be identified, it will still count. Examples would include:

1) “That tall, handsome editor from AskLegal” - There’s only one editor at AskLegal

As long as some people can figure out who that person is, it’s defamatory.

So, what can I even say?

Remember the guidelines for online group admins that the Malaysian Communications and Multimedia Commission (MCMC) published back in May? The guidelines have no force of law alone, but they were designed to help us follow the law. 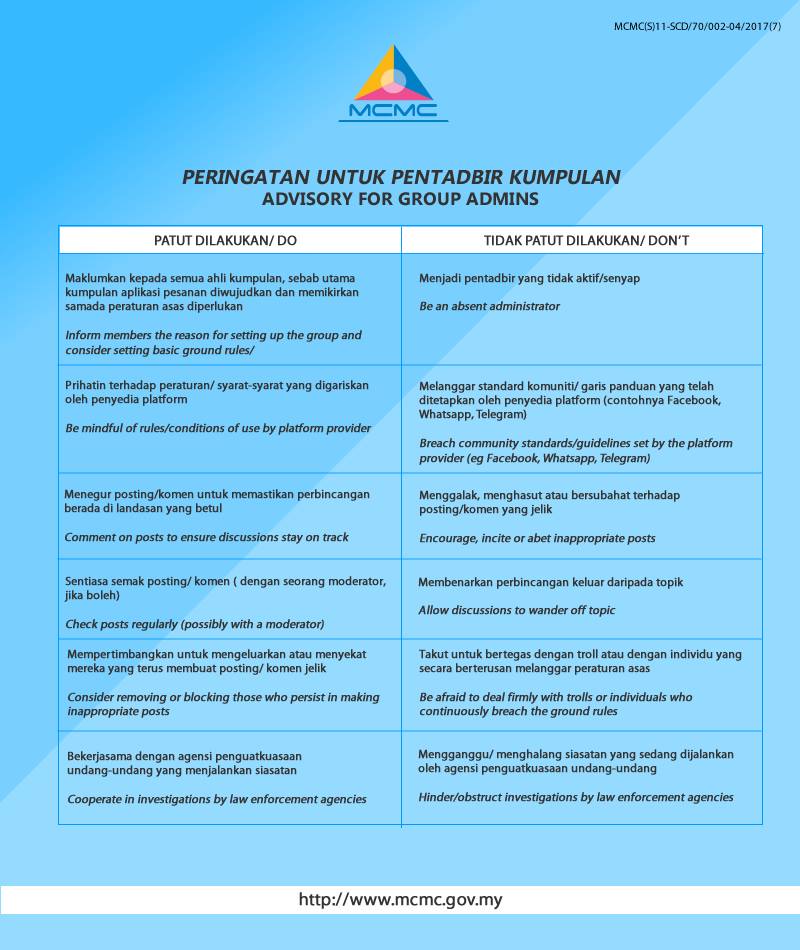 You can say a lot, just subject to some rules. Just this weekend (5 August 2017) there was a bizarre road bullying case where the victim took to the lowyat.net forums, reporting the facts of what happened - his post is fully legal (so follow his example). Generally, these are examples of things you can and cannot say:

Things you can say:

1) Established truth (if a person is a convicted criminal, you can call them a criminal)

3) Complaint to a higher authority (such as making a police report, or reporting a kid to their parents)

4) Protecting someone’s interest (eg. telling your staff to cut off client X because they never pay on time)

2) Speculation about a person (eg. “she dresses so well; must be some rich spoilt brat”)

3) Attacks on a person’s character

On top of that, you’re also breaking 2 laws

Normally, defamation is a civil case (a lawsuit) where the victim sues you for compensation for damage to their reputation. But because of some federal laws you are breaking, the government can also choose to come after you.

The First Law - The Penal Code

Section 499 of the Penal Code makes it a crime to defame another person:

“Whoever, by words either spoken or intended to be read or by signs, or by visible representations, makes or publishes any imputation concerning any person, intending to harm, or knowing or having reason to believe that such imputation will harm the reputation and shall also be liable to fine of such person, is said, except in the cases hereinafter excepted, to defame that person.”

There are 10 exceptions complete with real-life examples in Section 499 of the Penal Code.

The penalty for defamation? It’s ruled by Section 500 to be up to 2 years in prison, a fine, or both. Note that the fine amount is not stated; this means that it is theoretically unlimited.

While that’s penalty for criminal defamation, there’s also compensation to be paid if you get sued for defamation. Each case of defamation is unique to its facts and generally, the more serious the defamation and the more high-profile the person involved, the higher the compensation will be. For example, tycoon Tan Sri Vincent Tan was awarded RM7 million against journalists in one case as a high-profile business owner who would suffer major loss if his reputation was wrongly stained.

Other than the Penal Code, Section 233 of the Communications & Multimedia Act 1998 makes it an offence to use a network service or app for improper purposes.

(ii) initiates the transmission of,

any comment, request, suggestion or other communication which is obscene, indecent, false, menacing or offensive in character with intent to annoy, abuse, threaten or harass another person; ……

Yes, this includes posting defamatory remarks on social media. The penalty for such an offence is a fine up to RM50,000, 1 year of jail, or both.

You can also get in trouble for sharing a defamatory post

This is where things get rough for keyboard warriors. Every single repost or share of a defamatory statement is an extra publication, and so every single person involved can be named in the lawsuit by the victim, and prosecuted by the government as well. Yes, 700 shares means 700 people can get sued. This applies whether you are a group admin or a normal user.

This rule was established back in 1829 in the case of M’Pherson v Daniels. Any person republishing a defamatory statement is also responsible to make sure that such a statement is true and fair, and will so be liable for defamation as well. They cannot say that they are just reposting what someone else has said or they are not responsible for what the original poster said. This is because they chose to share the defamatory statement.

With great power, you still shouldn’t defame others

The Freedom of Speech guaranteed by Article 10 of the Federal Constitution is not absolute, and certainly doesn’t extend to the right to spread lies about others. The Golden Rule is very apt here: do unto others as you would to yourself. While telling others to watch out for a conman can be seen as looking out for others, it's different if we spread lies about the conman, even if he’s not a nice person. The other way to see it is that two wrongs don’t make a right.

Before posting about people you find nasty on social media, think of the consequences and refrain from adding insults to your facts. Use social media responsibly people!