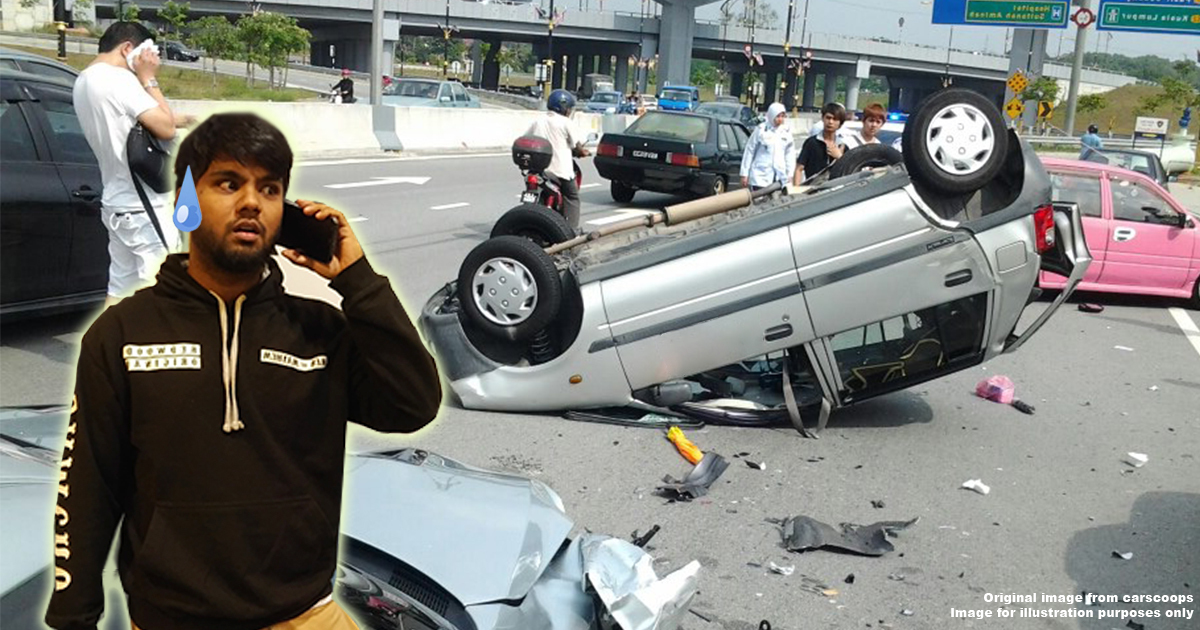 Traffic accidents are no fun, paying for repairs and medical bills can just as painful as any injuries you may get. Regardless, accidents happen. You’ve heard general tips and tricks all around you, maybe even gotten into a few accidents yourself…but you might not know that some of those tips actually get you into more legal trouble instead of preventing them.

So, what ARE you supposed to do when an accident happens?

1. Always check yourself for injuries

Assuming you’re still conscious, the very first thing to do after impact in a traffic accident is to check yourself for any injuries. Objects in your car and fragments of metal, glass, and plastic could have been flying around, and you may not even realize that you’re bleeding. If any foreign objects are stuck in your body, do not try to remove them without medical attention as it could hurt yourself more and make you bleed out faster.

Call for an ambulance if you need to, and do what you can to give yourself some first aid. It helps a lot to keep a well-stocked first aid kit in the car for these emergencies.

2. Check your surroundings before exiting your car

If you were lucky enough to come out uninjured, the last thing you want is to come out of your vehicle and get beaten up by the other driver, or even an angry mob out to get “revenge”. As much as we detest these incidents, they have been known to happen where some members of the public make assumptions about what happened and then get aggressive, going after even innocent bystanders.

Always be aware of your surroundings before exiting your vehicle. If you are in immediate danger from other drivers involved in the accident, or an angry mob, you are allowed by the law of self-defence to escape to the nearest police station to make a report.

[READ MORE - If I get into a car accident, can I go to the nearest Balai Polis instead of stopping?

3. Take pictures of the damage to all cars, and injuries

Before anything else, make sure everyone is okay and call for an ambulance if anyone is hurt.

Contrary to popular belief, you actually want to come out and take pictures of the accident scene BEFORE you move your vehicles to the side of the road. That is of course, unless it’s dangerous to do so and you don’t have a choice. Other than substantiating the damages and injuries to claim for compensation, you may need the photographic evidence to prove who was at fault.

Moving the vehicles affects the evidence of the accident, and could mean the difference between proving it was another driver’s fault, and getting the blame pinned on you. For example, if a driver caused the accident because he suddenly coasted between traffic lanes, it might be important to snap a picture of the the way the accident happened, which would prove that the driver was careless. Without the proof, anyone could just as easily be blamed and you’d have a “he said, she said” deadlock on your hands.

You should take pictures of all damage sustained by EACH vehicle involved in the accident (make sure the registration number of each vehicle is clearly visible), as well as any injuries the people involved have. Be sure to note the time and location of the accident.

That being said, having a dashboard camera can go a long way in helping to document the events leading up to the crash, especially in if you’re caught in a hit-and-run situation (such as by recording the license plate number).

Note: If the accident is serious (eg. both cars are totaled), call the police and wait for them to arrive.

4. Keep your hazard lights on when moving your vehicles to the side of the road

If they’re still functional (and assuming no one is trapped in a car), you may want to consider moving your vehicles over to the left-most lane (or the emergency lane) of the road so you won’t hold up traffic. You’ll want to move slowly and keep your hazard lights on as a warning to approaching traffic - the last thing you want now is another collision.

If you couldn’t (or didn’t) take pictures of the damage before moving the vehicles involved, now is the time to do so.

5. Get the details of the other driver(s) and any witnesses

After getting your vehicles out of the way, meet with the other drivers involved in the accident to exchange details. You’ll want to record the following:

Technically, you are not obliged to hand over your NRIC or driver’s license (only certain government officers can demand them), but you are still required to exchange information according to Section 52(1) of the Road Transport Act 1987, and exchanging identification cards is the simplest way to verify your identities. What you can do is simply take a picture of the other driver’s ID, or jot don their details – but you are not allowed to keep their IC or driver’s license (and vice versa).

If you can, approach some witnesses and ask for their contact information as well. It might just help you prove your case.

[READ MORE - Are security guards allowed to take your IC or license for safekeeping?]

6. Never admit fault until the insurance claims are settled

This doesn’t mean that you come out of your vehicle being rude and start bullying the other driver. What this means is that you should not say anything claiming or denying responsibility…mostly for insurance reasons. There are 3 big reasons for this:

[READ MORE - If you hit a car from behind in Malaysia, is it automatically your fault?]

[READ MORE – If a car hits a motorcycle in Malaysia, is it automatically the car's fault?]

You’re probably asking at this point: can we settle the accident privately instead? Technically speaking, there’s no law that says you can’t – but you take certain risks by doing so, because you are required by Section 52(2) to report all accidents to the police:

“In the case of any such accident as aforesaid the driver of such motor vehicle…...shall report the accident at the nearest police station as soon as reasonably practicable and in any case within twenty-four hours of such occurrence…” - emphasis added.

It’s actually not advisable to privately settle accidents, because the other party can still back out of the deal and make an insurance claim against you - and you’ll have no proof to defend yourself. What’s more, they can still make a police report against you too…

You could consider settling and avoiding all the hassle if the damage is limited to only a few scratches, but generally speaking, you should still make a police report (even if you’re not claiming insurance) to protect yourself from surprise third party claims who may twist the story against you.

[READ MORE – If you're hit by a driver with no insurance, this Malaysian agency can help... for FREE]

To make the report, you’ll want to head over to the nearest police station with a traffic police division to make your report. It’s usually the district’s HQ, but you may have to find out which one it is for your area.

By the way, if you have a valid reason for not making a report within 24 hours (like being injured in the hospital), the police will still accept your report.

[READ MORE – Can you still report an accident to the PDRM after 24 hours have passed?]

And never fall for “kind” tow trucks offering to help

There are sometimes two trucks that will stop and offer help to you out of nowhere after an accident. Never ever let them tow your car (they might also try to get you to sign some documents - never sign anything) as they are known to later extort money from you in the form of “towing fees”, “release fees”, “drop-off fees”, all while taking your car hostage to get you to pay. SAYS has a well-documented account of one such incident over here.

Have any more questions or heard of more tips that we didn’t cover here? Let us know in the comments below, or on our Facebook page and we’ll see what we can do.