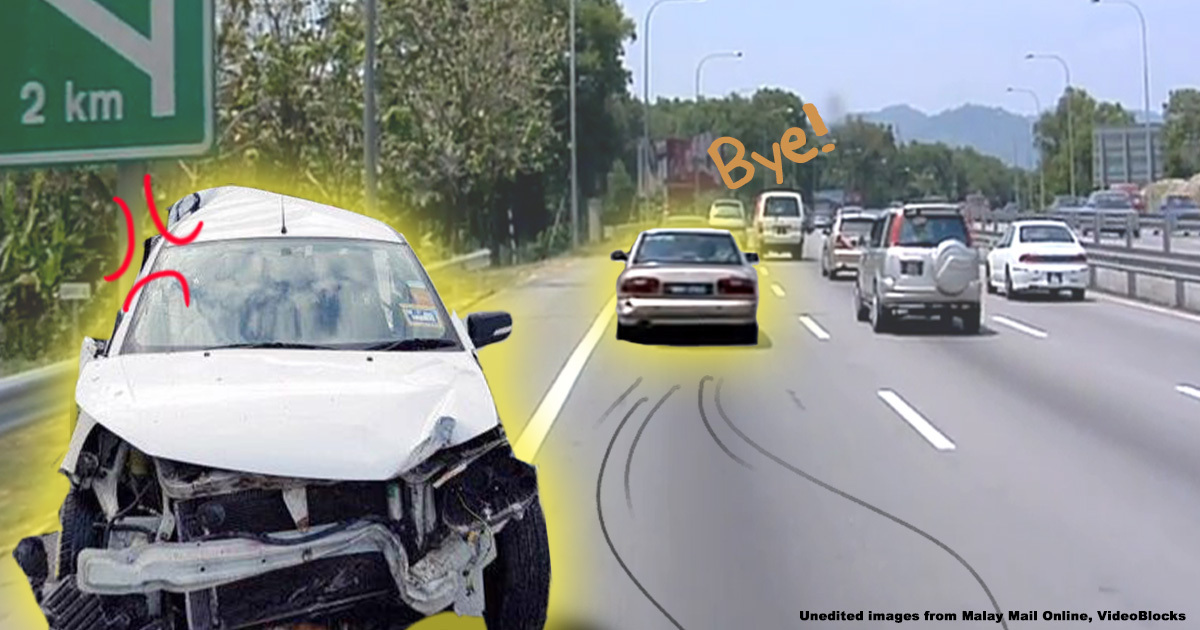 If I get into a car accident, can I go to the nearest Balai Polis instead of stopping?

Sometimes, we hear tidbits of legal knowledge from friends and family such as “if you hit a car from behind it’s automatically your fault”, and “you can’t use a knife bigger than the robber’s to defend yourself”. While these little pieces of information usually come from real Malaysian laws, they are often only a small part of the truth.

[READ MORE - Why do some Malaysians get arrested for killing robbers in self defence?]

In this case, you might have heard of a myth that goes: (the link goes to an opinion piece on FreeMalaysiaToday)

“If you get into a car accident, you don’t have to stop because you can just go to a police station within 24 hours to report the incident”

Most of us are familiar enough with being told that road accidents must be reported within 24 hours. In case you’re wondering, the law that this comes from is Section 52(2) of the Road Transport Act 1987 (RTA), which says:

Nobody wants to get into an accident, but if it does happen, we all hope that the other driver is not going to pull a hit-and-run on us. It’s frustrating because the other driver is usually trying to escape responsibility for the accident, and very often these cases end up in a dead end because the police don’t have enough information to track the driver down. So if you haven’t gotten one already, you might want to consider a dashboard camera for your car - which can help record the offending car’s license plate and provide visual evidence to back up your side of the story.

That being said though, are you actually allowed to leave the accident scene and go a police station within 24 hours?

Drivers involved in an accident must stop

If you’ve ever been told that you can skip exchanging information with the other people involved in your accident, then you’ve been misinformed. Section 52(1) of the RTA requires drivers who are involved in an accident to:

Section 52(3) also requires those involved in an accident to assist the police or traffic police, and also help the injured at the scene as much as they reasonably can. Anyone who does not follow these rules commits a crime.

The consequences are laid out in Section 119 of the RTA. For first time offenders, there is a fine of up to RM2,000 or a prison sentence of up to 6 months. And for repeat offenders, the penalty is increased to a maximum of RM4,000 or up to 1 year in jail, or both.

But that’s not all, the Malaysian Highway Code also has something to say about stopping after accidents. It’s a set of rules for road users that are given force of law through Section 68 of the RTA, and while breaking the rules in the Highway Code is not a crime, whether or not you were following those rules can be used as evidence in court - and it can make your punishment lighter, or worse.

Rule 48 of the Highway Code is about accidents - which goes:

“If you are involved in an accident which has caused injury or damage, you must stop, help the injured, give your name and address to anyone demanding it, and report the accident to the nearest police station as soon as possible and in any case within twenty-four hours of the accident occurring.”

If your accident is a severe one and ends up going to court, failing to stop and help could be taken as a reflection of your poor character and lack of remorse. And may actually compel the judge to punish you more harshly. A bad attitude can become what is called an “aggravating factor” in a criminal trial for the prosecution to argue that a heavier sentence is needed to discipline you.

But if you see some thugs coming for you...

That being said, if you find yourself in a dangerous situation after an accident, like if you are suddenly surrounded by an angry mob, you may want to get out of there as fast as you can anyway. A lot of us have heard stories about people getting bashed up, threatened, and even robbed after getting into an accident. Although we don’t know how true those stories are, or how often they happen, if it does happen to you, don’t stop until you get to the authorities.

Although there is a legal duty to stop, there is also a real danger of getting beaten up so you should use your right to self-defence in Section 96 of the Penal Code by avoiding the conflict altogether. Obviously, you should explain the situation to the police when giving your report.

So, no you can’t go to the police station, even if you’re in a rush

In a situation where you’re injured in an accident, you’d be pretty angry and disappointed to see the other driver speeding off in a hurry instead of stopping to check on you. You’re going to report the case as a hit-and-run because you don’t know if he will turn up at the police station at all. This is going to reflect badly on the other driver, and yes, he can be arrested for doing that.

Our Highway Code actually has tips on how to avoid accidents on the road, such as slowing down for that “crazy driver” even when we have the right of way. Because according this pantun in the Highway Code, we’re better off giving way than dead:

Who died maintaining his right of way,

He was quite in right as he sped along,

But he's just as dead as if he'd been wrong.”