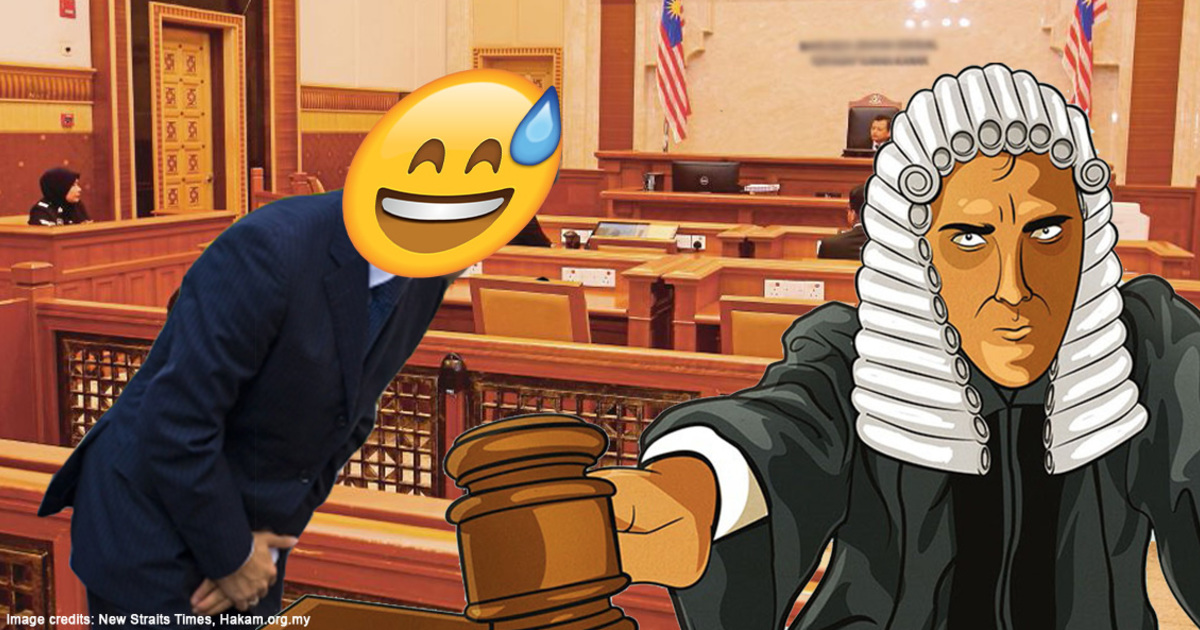 If you commit a crime in Malaysia, how can you get the judge to go easy on you?

Imagine you’ve been summoned to court for a traffic offence, like driving in the emergency lane. You probably got issued a court summons instead of the fine you were expecting, and now you have to go to court.

Almost no one would want to spend 6 months in prison if they can avoid it. Better not serve the maximum sentence and get something lower instead. But is there a way to get a lighter sentence from the judge? There is!

You can just plead guilty

While pleading guilty seems a little counter-intuitive or illogical, by saving the time for the court and cooperating, you may be given a more lenient sentence. To find out how exactly this works, we interviewed a former volunteer pupil at the KL Bar’s dock brief legal aid service, Khong Mei-Yan.

When you get summoned to court, you are known as “the accused” or orang kena tuduh (OKT ). You’ll get read the charge of your offence and you can either plead “guilty” or “not guilty”. If you plead “guilty” or are proven guilty, the judge will proceed to pass your sentence. A sentence passed by a judge must follow the penalties stipulated in our written laws. Like the example above, driving in the emergency lane carries a maximum fine of RM2,000, but you can get a fine lower than that.

“Case laws require judges to consider established legal principles on sentencing. These include recognised aims of sentencing, for example: to punish, to deter, and to rehabilitate. Very importantly, the judge is required to consider the mitigating and aggravating circumstances which may influence what sentence he wants to pass.” - Khong Mei-Yan in email interview with ASKLEGAL

Mitigating circumstances are very simply anything that might show you deserve a lighter punishment, while aggravating circumstances are those that show you need to be taught a lesson, like if you have a long criminal record. Mei-Yan further explains to us that after a finding of guilt, the judge will always ask the accused or their lawyer to make a mitigation plea (rayuan). This is where you can persuade the judge to give a more lenient sentence, or a different type of punishment altogether.

How else can get you a lighter sentence?

Other than cooperating with the legal process, your sentencing can also depend on the impact it would have on your life. For example, if you have dependents (ie. young children or aging parents who depend on you) who would have a tough time if you were imprisoned or given a big fine, the judge can take it into account and give a lighter sentence.

Mei-Yan gave us an example of how a lawyer makes a mitigation plea. It typically sounds something like this:

“My Lord, the OKT is has pleaded guilty and saved the court’s time and costs. The OKT is ____ years old and is married. He is the sole breadwinner in his family which consists of his housewife, his 10 children, his aging parents, and their aged parents. The OKT has diabetes, asthma and is recovering from a broken leg. The OKT had at all times been cooperative with the police and had kindly offered to compensate the victim. My Lord, the OKT suffers from economic hardship and he used to work only as a lorry driver before he was caught. The OKT had always been a citizen of good character and this is his first offence. The OKT is truly repentant of his wrongdoing and therefore asks the court for the minimum fine.”

Basically if the impact on you is going to too big when compared to your crime, the judge can consider going easy on you. Here’s a non-exhaustive list of factors that the judge can take into account:

One extra mitigating factor can be when you’ve been under remand for a long time, and should thus have a shorter time in prison. You can ask for your sentence to run from your date of arrest instead of the date of sentencing. But keep in mind that the judge is not obliged to go easy on you, they still have the discretion to decide what sentence to give.

“A mitigation plea done right can help persuade the judge to pass a lighter sentence. However, the accused and their lawyer don’t have any control over how the plea will work. It’s still up to the judge to decide.” - Khong Mei-Yan in email interview with ASKLEGAL

You don’t need a lawyer to make a mitigation plea

Apparently, in situations where the accused is not represented by a lawyer, the judge themselves will actually assist the accused. They’ll prompt the accused with questions about their age, job, marital status, number of dependents, and whether they prefer a fine or jail time (where there is an option). So if you can’t get a lawyer, it’s not a big problem.

[READ MORE - What if you need a lawyer but can’t afford one in Malaysia?]

In any case, you might still find a lawyer’s guidance and expertise to be helpful. As Mei-Yan explains to us:

“An accused may find a lawyer to be particularly helpful in the following cases:

1. The accused is a first time offender and is clueless and frightened

2. The maximum punishment would be unbearable

3. The accused has very good mitigating circumstances and a lawyer is in a better position to help mitigate on their behalf”

She goes on to explain that if you want to be represented by a lawyer, you should engage their services before your court appearance. If you do need a lawyer, it’s best to get one as early as possible rather than right outside the courtroom. It’s illegal and unprofessional for lawyers to approach you and offer their services for a fee. And if it happens, you can actually lodge a complaint with the Advocates & Solicitors Disciplinary Board.

Mitigation pleas can reduce your fine, your jail time, and even spare you from the usual punishment - given the right circumstances. Mei-Yan shared her experience with a 18-year old boy who got busted for drug possession - which carries a very high fine under the Dangerous Drugs Act 1952 depending on the type of drug. The penalties can extend to RM20,000 in fines and up to 5 years in jail.

“When I was a pupil I was involved in the KL Bar dock brief program. One day when I was on duty, I was approached by a mother who told me her 18-year old son was in the lokap and she wished to advise her son to plead guilty to a charge of drug possession. After interviewing the mother and her son, I was told that the father of the child who was only a painter and the sole breadwinner of 10 children, the youngest of whom was still a baby. I informed the court of these facts and the judge released the boy on the condition of probation, community service for a month, and a minimum fine instead of a sentence of imprisonment. I was told by the court interpreter that the boy’s young age was the most significant factor which weighed on the judge’s mind.”  - Khong Mei-Yan in email interview with ASKLEGAL

Anyone can make a mitigation plea, even if you can’t afford a lawyer

There are actually services provided by the Bar Council of each State under the dock brief programme, where trainee lawyers provide free ad hoc legal services to people in need. They can only deal with offences that fall within the Magistrate Courts’ jurisdiction.

“Pupils on duty in a particular court can be distinguished by their name tag stating that they are from “Pusat Bantuan Guaman”. Those who wish to be represented by a pupil may indicate to the pupil that they wish to plead guilty and agree for the pupil to represent them. If the court has not commenced, the pupil will then mitigate on their behalf.” - Khong Mei-Yan in email interview with ASKLEGAL

For cases that fall beyond the jurisdiction of the Magistrate Courts’, Yayasan Bantuan Guaman Kebangsaan (YBGK) offers free legal aid to Malaysian citizens through its panel lawyers. They can’t deal with death penalty cases though (generally more serious crimes like murder and drug trafficking). If you need more information on who can help if you can’t afford a lawyer, check out our article on legal aid over here.