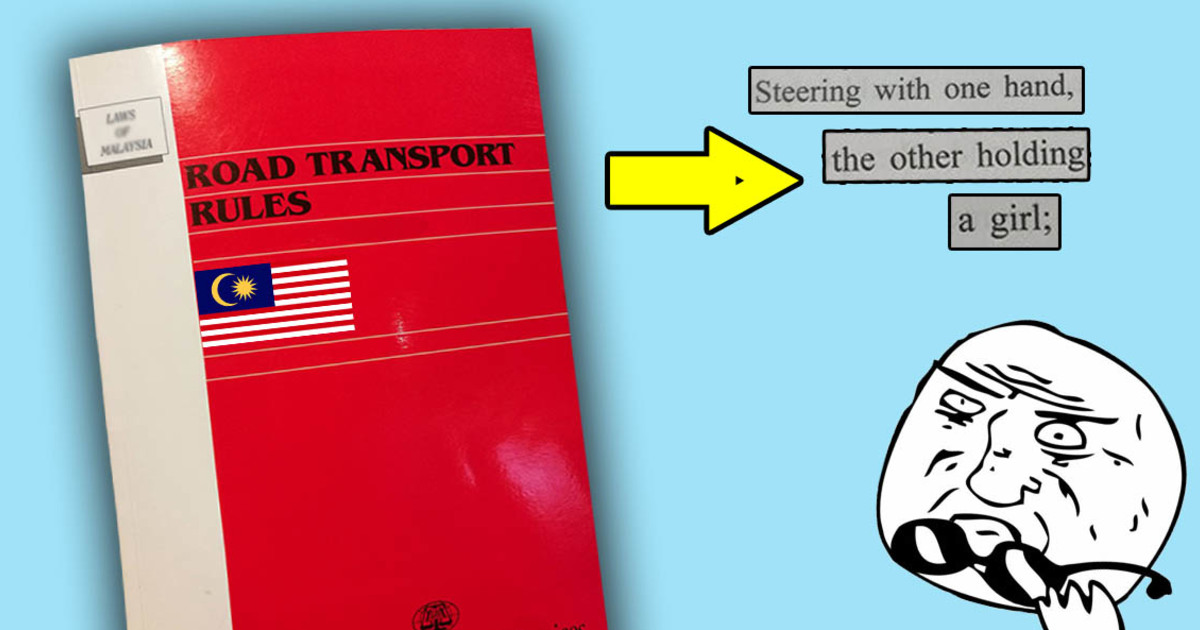 If you’ve ever tried reading any act of law, you’d know that it’s drier than a stale biscuit in the Sahara desert. That’s what we thought too, until we started flipping though a compilation of the Malaysian Road Transport Rules. This compilation included a copy of the Malaysian Highway Code with rules that are pretty funny and sometimes downright savage.

Unfortunately, you won’t find them in the online version of the Malaysian Highway Code – as that’s slightly different from the printed version – so we’ve reproduced them here for your reading pleasure.

Just for reference, the Malaysian Highway Code is what our “undang”test (for driver’s licenses) is based on, and is actually enforceable under section 63 of the Road Transport Act 1987, plus our courts refer to it in some cases involving traffic violations. That’s how we know it’s legit. Because it is legit, it makes the way certain rules within it are phrased even funnier, like the ones below

1. The Highway Code writers know what you do with your free hand ( ͡° ͜ʖ ͡°)

But also, what do you do with your other hand? The Malaysian Highway Code goes the extra mile to provide some possibilities:

11. Discourtesy by drivers is marked not only by speeding and cutting in and out of traffic. Other actions that constitute discourtesy are:

Failure to give proper signals in due time;

Parking on a bend or well away from the side of the road;

Steering with one hand, the other holding the roof – or a girl;

Driving in the middle of the road when others wish to overtake;

Driving through mud and puddles at speed and splashing pedestrians.

Was the practice of driving one-handed and holding a girl with the free arm so prevalent as to warrant this level of specificity? We’ll never know.

What we do know is that if you steer your car with one hand and get into an accident, that can land you in legal hot water under Sections 42 and 43 the Road Transport Act 1987 for reckless or inconsiderate driving.

In driving, the right of way is a system that determines who should give way or stop in a situation where traffic merges, such as in junctions. However, there may be some people who take their right of way a little too seriously, even to the point of willingly causing an accident.

Take this simple example: Ah Fook is at a traffic light and the lights turn green. He sees a car turning from the opposite direction but he still moves forward because it’s his right of way and – predictably – crashes into the car. So although Ah Fook was technically correct, the accident could have been easily avoided if he had just waited.

In some cases (perhaps not in the example above), even though you were technically correct, this manner of driving can be considered dangerous, reckless, careless and/or inconsiderate under sections 42 and 43 of the Road Transport Act 1986. Of course, it goes without saying that you could also end up with more serious consequences such as injuries or death.

And so, the Highway Code used a poem to remind us of our own mortality:

25. A driver must stop, if by doing so he can avoid a collision or risk of collision. There is no sense in being right, if it concludes in lateness, damage, death or injury.
“Here lies the body of Jonathan Gray,
Who died maintaining his right of way,
He was quite in right as he sped along,
But he's just as dead as if he'd been wrong.”

We couldn’t make this up even if we wanted to.

3. They kept it real when advising cyclists

Section 54 of the Road Transport Act 1987 specify that laws against dangerous driving, careless driving, and even drunk driving also apply to cyclists. It would make sense then that the Highway Code has a section just for bicyclists. The online copy of the Code provides a sobering reminder to cyclists:

55. Maintain a safe distance with all other road users, in case of sudden changes in their direction or speed. Remember you are the road user with the second lowest speed. Make sure you allow for reaction time and time to get far enough out of the way to avoid a collision.

Of course some cyclists may not be happy about only being faster than someone who’s walking, and might want to bump themselves up to third slowest by hunching over the bicycle or doing the “Superman”. So in the very next point, the Code provides a reminder based on simple Physics:

56. Keep your head up: The habit of keeping your head low may reduce wind resistance, but in traffic it’s likely to produce a cracked skull.

4. The writers must have spent a lot of time around aunties

Gossiping isn’t usually punishable by law unless someone sues you for defamation (damaging the good reputation of someone, otherwise known as slander or libel) but that’s a whole other can of worms.

[READ MORE: Can you get in trouble for insulting someone?]

Sometimes, you might have a juicy bit of info that you must share, even if you’re in the middle of the street. If that’s the case, the Highway Code has something to say about that:

82. If you must stand and gossip, do so away from all traffic, including foot traffic. It is discourteous to force others to walk around you, and dangerous to everyone to force them onto the road.

So the reasoning is that if you stand around talking to someone on the road you can be mowed down by oncoming traffic, and if you do it on the sidewalk, you might be forcing other people to bypass you by going onto the road.

[READ MORE: If you hit a jaywalker in Malaysia, who’s at fault?]

5. If everyone did this, we’ll all be safe drivers

Many accidents happen when vehicles are turning at junctions. It’s not surprising since there are various elements that can contribute to these accidents: blind angles, vehicles moving at different speeds, confusing rights of way. Just the act of turning at a junction isn’t illegal, but turning in a dangerous, reckless, inconsiderate or careless manner is (according to sections 42 and 43 of the Road Transport Act 1987).

18. When turning left or right, drivers must always give way to through traffic, including pedestrian traffic. When turning right on a police-controlled crossing, go around the policeman into the correct line of traffic. If there is no policeman then imagine there is one and make the turn as shown in the sketch.

Maybe it’s best for all of us to just imagine a police officer watching us do our thing daily, the world would be a much safer place.