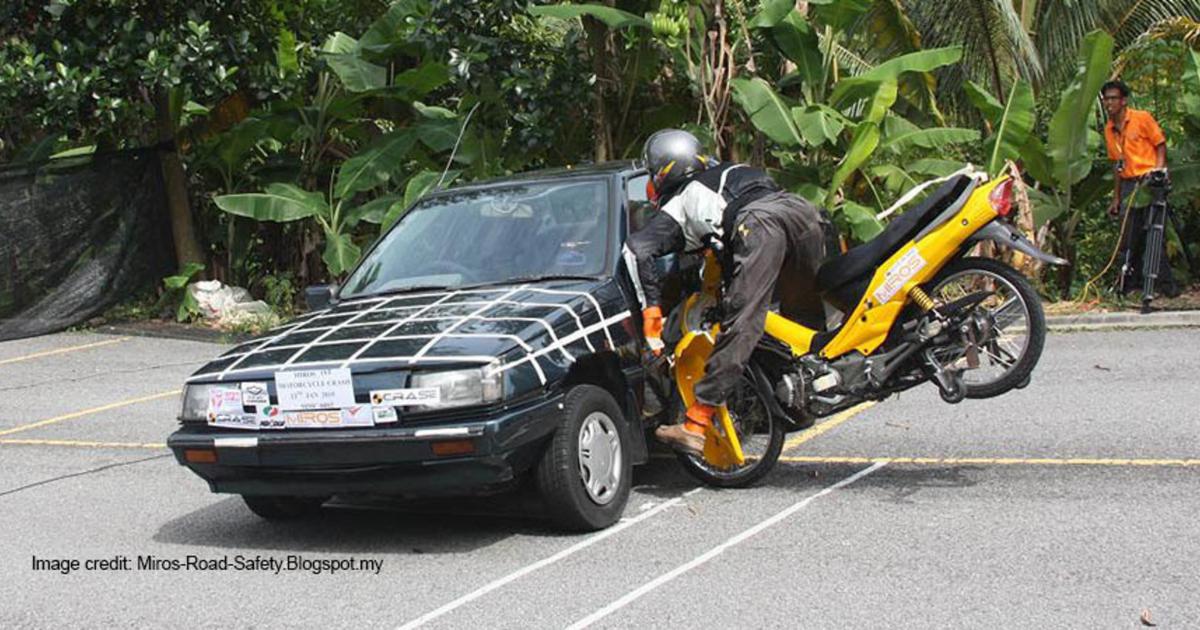 If a car hits a motorcycle in Malaysia, is it automatically the car's fault?

about 5 years ago chiahoong lim

Note: The above image is from a crash test conducted by MIROS. No real people were hurt.

So you're driving down, say, the Federal Highway one day. The sun is shining, your killer track is playing. Surely nothing could go wrong. You slow down to turn into a junction on your left, when suddenly you hear a loud CRASH! A motorcycle has just collided into your brand new car. You try to calm yourself down and think about how to go about the situation. Your mind inexplicably brings up something your uncle told you once:

"When you get into an accident with a motorcycle, don't bother arguing... it's always your fault!"

It seems to make sense. Motorcyclists are inherently in a more dangerous position, since they're not protected by their vehicle, and (most) motorcycles don't offer airbags as a safety option. The gem of a factoid has been repeated far and wide and for so long that it might as well be truth, right?

Not necessarily. Well, then whose fault is it? The answer is: It depends. It really does. To see who we should point the finger at, there are a few things we have to look at.

What happens when you get into a traffic accident?

However, we won't be delving too deep into this aspect. Instead, this article will just be focusing on explaining how here's usually a few things that can happen:

1. You can settle the issue privately without going to the police or to court

2. Either the guilty party or the victim or both can go make a police report, and this has to be done within 24 hours from the time of the accident. It has to be a traffic police station, and should have jurisdiction (power) over the area where the accident happened

3. The matter can go to trial where the court has to decide the issues of who is responsible for causing the accident (liability) and how much should the injured party receive (quantum)

The police handles the issue by taking reports and issuing summonses to whomever the inspector finds is at fault. Take note: if one party reports and the other doesn't, the inspector usually rules in favour of the person who made the report.

What if the police inspector claims it was your fault (when you are sure that it wasn't)? 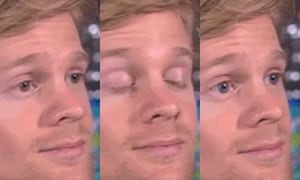 Y-you wanna repeat that? Image by The Guardian


You can then decide to take the matter to court. Choices include consulting with your insurance firm that will arrange for a lawyer or engage one personally. This is where the tort of negligence enters the picture. From here on 'negligence' refers to the tort (legal term), instead of the everyday meaning of the word.

Most of the time, it comes down to this - If you drove negligently, then you are at fault. This means that you have fallen short of the standard of the care and skill of an ordinary driver. To prove negligence, there must have been a duty of care owed, and there must have been a breach of that duty. An example of a duty of a driver is explained in the case of Chai Phin Chong (1998):

...a strong duty on the part of a driver to keep a good lookout while driving....... The sharpness of the lookout required depends upon the circumstances existing at the time... A driver should always anticipate the possible presence of others on the road and should always be able to stop within the range of his permitted vision..


There are some other issues such as remoteness (did you directly cause the accident? Was it foreseeable that what you did would cause the accident to happen?) An example here would be you were driving at 140 km/h on a road that has the speed limit of 80 km/h, at 8am on a workday morning. You end up hitting a vehicle in front of you because you couldn't stop in time. It was foreseeable that the accident would happen because you exceeded the speed limit by that much at the time when there are usually many vehicles on the road. The short version of all that is: don't be careless while you're on the road. 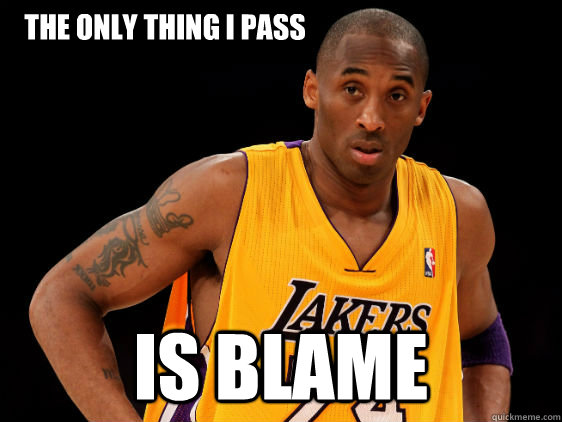 Negligence is your middle name. Image by quickmeme


There's another question to ask. Is the other party contributorily negligent? What does that mean? That means that the other party was ALSO negligent, therefore contributing the causing of the accident. Here we look at the case of Teoh Weng You & Anor v Tan Hee Joo (2017).

Dude was driving a lorry and got into a collision with a motorcycle at the mouth of a junction. The motorcyclist was trying to overtake the lorry but the lorry suddenly turned right, and he was hit from behind. Evidence and an eyewitness pointed to the fact that the motor lorry did not stop before turning right, and no signal was given. At the first glance, the lorry driver is obviously at fault. However:


The learned sessions court judge made a finding that the respondent had behaved in a dangerous manner when he overtook the motor lorry at a place where there was a junction.

A second illustration of contributory negligence is from Yap Kiam Lin v Azman bin Abdullah & Anor (2016). The motorcyclist in this case was travelling at a fast speed and did not stop in time to avoid collision with a car. The courts' decision was to...

...hold the defendant and the deceased to be each 50% liable for the accident. 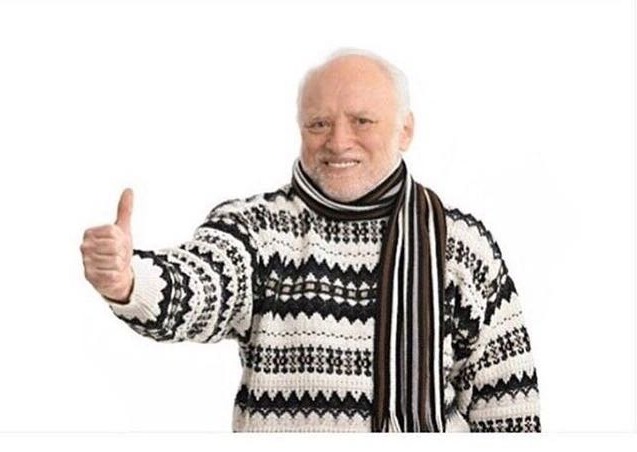 The more we know. Image by Imgur

What if I'm the one who gets hit by a motorcycle?

Fear not! If you were not contributorily negligent (meaning you were not also careless), it can mean that it is entirely the motorcyclists fault. Note also that it works the same for situations of when a car knocks into a bike. Individual circumstances differ and that's what matters.

In Ali bin Saad v Toyibah bt Ahmad Nordin (2017) the car was rear ended by a motorcyclist on a bridge at Alor Setar. Here's where it gets fun, amigos. Both parties reported the incident to the police, and they both had their own version of it. The motorcyclist said that she was travelling on a straight road and the car that was on her right made a sudden left turn. The car driver's take on the facts was that he was going straight and stopped when the vehicle in front of his car stopped. That's when the motorcycle collided into his car.

Turns out there was no evidence on whether the car driver was changing lanes, and the motorcyclist was found to be entirely liable.

TLDR; The car driver is not automatically wrong

The Malaysian Highway Code (that our "undang" test is based on) actually lays down some grounds rules for the road such as courtesy, in Section 10:

The courteous motorist will show consideration to all other road users whether drivers, cyclists or pedestrians. He controls his temper and obeys traffic regulations. You must not allow rudeness or stupidity of other road users to affect your own good manners, judgement and conduct while driving.

Preach. The Code is enforceable by law under Section 68 of the Road Transport Act 1987, and is referred to in court.

The Road Transport Act 1987 provides that if one drives dangerously and with undue care such as to cause death, one may be charged under Section 41 of said Act. You will be summoned to court, and expect to be handed a jail term of not less than 2 years but not more than 10 years, plus a fine between RM5000 to RM20,000. Your driving license may also be suspended.

Similarly, Section 42 provides for people who are guilty of driving recklessly and dangerously, but not causing death. If convicted you can be imprisoned for a period of not exceeding 5 years, and a fine of not less than RM5000, but no more than RM15,000. Subsequent convictions will net you a longer term of imprisonment and heavier fines. Sections 43 and 44 deal with people who are found to be driving carelessly and inconsiderately, and driving under the influence (of drugs and/or alcohol), respectively.

If nothing else, what we should take home from this is to drive safe, and exercise reasonable care in whatever we do (this includes driving, of course). From the above examples, the common thread between all the cases is that the court will examine all (available) evidence and they do not favour motorcyclists just because. In fact, contributory negligence is a very common element in these sort of incidents.

And before you ask in the comments, yes, we have an article on whether you're automatically wrong if you hit a car from behind.

[READ MORE: If you hit a car from behind, is it automatically your fault?]