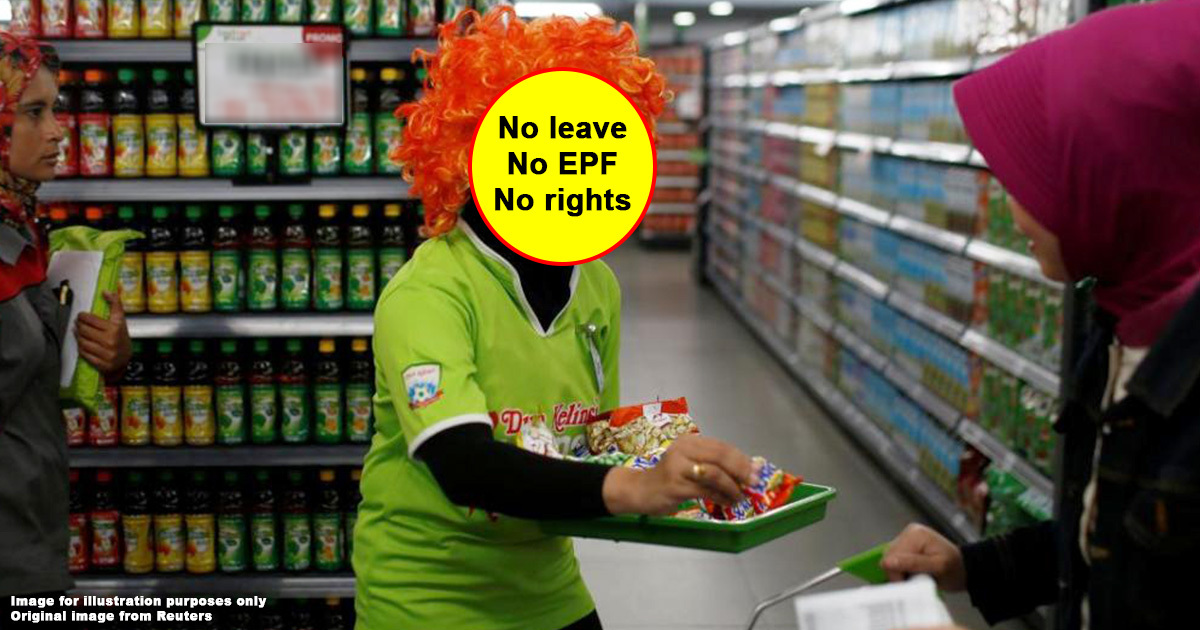 Are part-time promoters protected by labour laws in Malaysia?

If you’ve ever done part-time work before, you might have taken up a few positions where you promote products to the public, usually in a mall or at an event. You’re might be promised a fixed fee per day, or even be paid per month to follow a timetable. Depending on your luck, you might have also been treated unfairly by your bosses, such as not paying you on time, not giving you off-days, and even not paying you extra for working on public holidays.

[READ MORE - Is it legal for my boss to make me work on a Malaysian public holiday?]

Promoters who work full time are obviously considered employees, but a lot of promoters only work part-time as well, like on the weekends for extra income. We get sent a lot of questions by part-time promoters who have gone through these experiences asking if they’re considered employees who are protected by employment laws, or freelancers with no such protection.  We can’t provide a definite answer to these questions (which is why we’re writing an article) because…

It depends on your contract

The short answer is: it depends. As a part-time promoter, you don’t usually have a great deal of independence in how you do the job, which points to you being an employee. But it’s very difficult to say for sure without knowing exactly what is in your contract (if you signed one at all).

For example, you could have an arrangement with your employer that you’ll be using your special technique of promoting in a campaign, and you’ll be appearing on certain days decided between you and the employer - this would make you a freelancer. This arrangement is very different from if you mostly take orders from your employer on how to get the job done - you are probably given a scripted sales pitch to use when approaching people, which makes you an employee.

We’ll get into the details of how this works below. For starters, let’s see how our employment laws categorize employees and freelancers.

Employees have a “contract OF service”

A “contract of service” is basically a contract where you’ve agreed to “be of service” to someone else - which establishes a typical employee-employer relationship. An employment contract is not just a list of terms and conditions you sign to get a job, it’s also one of the legal requirements for people to be recognized as an employee.

Not all employees are considered equal in Malaysian law, and only employees who earn RM2,000 or less are protected under the Employment Act 1955, which gives protection against things like having no leave, or no extra pay on public holidays. Other employees will be relying on their employment contract for their rights (which is why you should always read your contracts). There are also different procedures to bring disputes depending on how much you earn, which we’ve covered in a previous article below.

[READ MORE - If your boss refuses to pay you in Malaysia, what can you do?]

[READ MORE - What happens if you sign a contract without reading it in Malaysia?]

Starting on 1 September 2022, all employees will now be protected under a new amendment in the Employment Act 1955. Previously, the act only applies to employees earning RM2,000 or less. But in the new amendment, you will have the same protection regardless of your salary. However, if you earn more than RM4,000 you won’t be eligible for certain overtime payments and termination benefits. Both employers and employees should also relook at their contract now because under Section 7 of the Employment Act, if any of the terms in the contract is worse for the employee compared to the Employment Act, those terms will not apply anymore.

Section 7 of the Employment Act 1955:
“...any term or condition of a contract of service or of an agreement, whether such contract or agreement was entered into before or after the coming into force of this Act, which provides a term or condition of service which is less favourable to an employee than a term of condition of service prescribed by this Act or any regulation... shall be void and of no effect to that extent and the more favourable provisions of this Act or any regulations… shall be substituted therefor.”

So for example, if you earn less than RM4,000 but your contract states that you’re not eligible for overtime pay, those terms do not apply anymore and you CAN claim for overtime.

Freelancers have a “contract FOR service”

Freelancers on the other hand come under a general group of people called “independent contractors”, and they enter what’s called a “contract for service” with their clients - they agree to provide a certain set of services to their clients. The relationship is governed by the contract itself (if they have one), and is NOT subject to any employment and labour laws. So any provision of rights and responsibilities of the freelancer and client should be in the contract itself.

While things seem straightforward as long as you have a clear label on your contract that it’s either an employment contract or a contract for services, the law does not pay much attention to what you call the contract. Instead, it pays closer attention to the actual effect and intentions behind the contract using a series of legal tests which will be covered in the next point.

As an example, some independent contractors don’t just do one-off projects for clients, but also use a “booking” model where they get hired to fill a full-time position for some time, typically in industries which need more hands during peak season. If you’re hired as an assistant for a movie shoot, you might consider yourself a freelancer since you don’t stay on with the company after the shoot is done, but the law may actually consider you as an employee because you have a fixed schedule and job scope to follow.

We’ll go over the legal tests below so you have a better idea of how this works.

How much control does your employer have over your work?

While the nature of your contract says a lot about whether you are an employee or an independent contractor, it doesn’t have the final say. There are at least 5 tests that the law uses in this:

This test simply looks at how much control your employer has over you and your work. Are you allowed to work autonomously and make your own decisions? Or does your employer decide a lot of what you do and how you do things?

The more control the employer has, the likelier you’ll be considered an employee.

This is the polar opposite of the Control Test. How much independence do you have when working? Can you decide on your own work process, work hours, and even subcontract work out?

The more independent you are, the likelier you’ll be considered an independent contractor.

Business integration refers to whether your functions and role are part and parcel of a business’s operations. For example, dish-washing is an integral part of a restaurant’s operations; but although the restaurant’s electrician plays an important role, taking care of the lights is only accessory to the business (it doesn’t play a direct role in serving customers food).

If your role is integrated into the business, you’re more likely to be considered an employee, and vice versa.

As for this test, it determines whether you’re dependent on the employer things like your wages and skills training; or if you operate independently (eg. you train and acquire your own skills, you’re responsible for your own profit or loss, you run your own business).

People who are economically dependent on their employers are more likely to be considered employees.

If so, you’re most likely an employee.

To be clear though, being part-time doesn’t mean that a person is not an employee. According to Section 2 of the Employment Act, part-time employees are just employees who have between 30% to 70% of working hours compared to the full-time position. For example, if a full-time promoter normally works everyday, but you only work 4 days a week, then you are a part-time promoter. If you’re just hired to do promotions for a one night event, then it’s likely you’re a freelancer.

You might also want to know that both full-time and part-time employees should have EPF contributions according to the Employees Provident Fund Act 1991. So employers who are taking you on will have to make the necessary arrangements. If you aren’t sure if your potential job is going to be considered “employment” or “freelance”, it’s best to consult a lawyer to be sure.