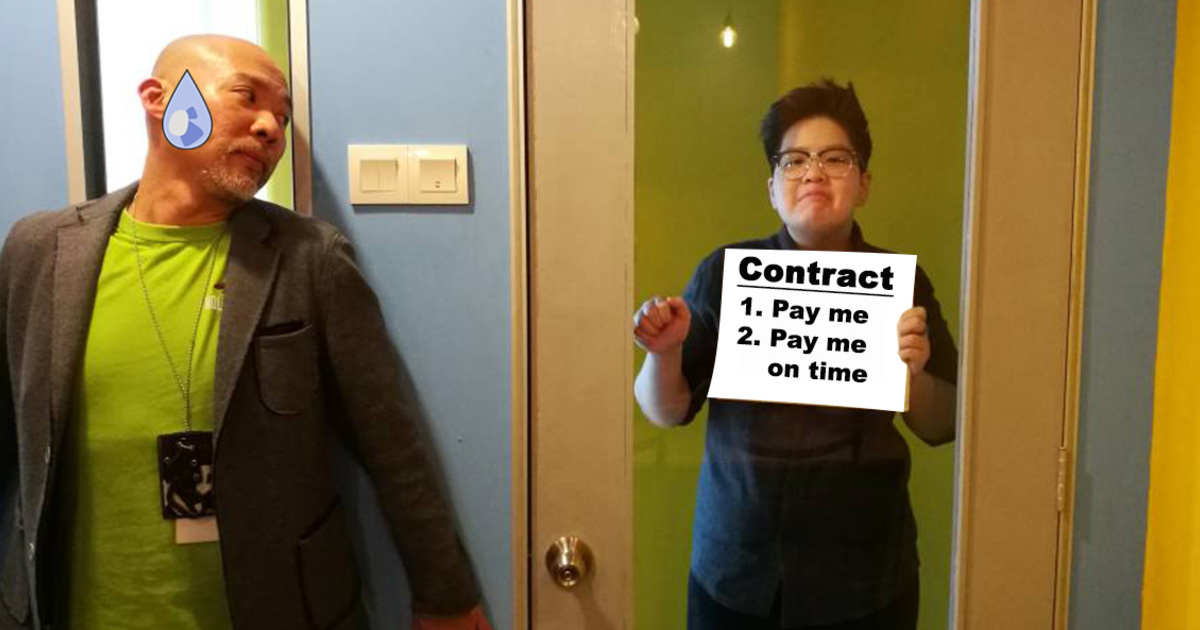 Have nightmares freelancing in Malaysia? Here’s how a contract can help you

If you’ve ever been a freelancer, or know people who freelance, you’re probably familiar with the horror stories that can come out of it. The friend that was offered compensation in “good exposure”, that time another friend was given extra work over and over without pay…The list goes on.

The general consensus is that freelancers are not actual employees of a company, and therefore, regular employment laws won’t apply to them. This is why many people consider that if you’re a freelancer, you’re pretty much left at the mercy of the person or company that commissioned you.

This may not always be true, as depending on your actual situation, some “freelance” jobs might actually come under “employment” according to the legal definition of things. In which case, you could actually sue your client under employment law and get compensated.

[READ MORE - How are Malaysian freelancers protected by law?]

But on the other hand, freelancers actually also have a way to define their rights and responsibilities properly rather than just a verbal agreement.

A contract can protect your legal rights

If the law sees you as a freelancer and not an employee, then your only solution to a dispute will lie in your contract with the client - which too many freelancers don’t use and don’t have. A contract doesn’t prevent problems 100%, but many of the common problems that freelancers face can be mitigated with it.

A contract can also outline how you and the client should solve issues that come up and, if you absolutely have to, you’ll have a record of what’s been agreed on to use in a small claims procedure later on.

You don’t necessarily need to go to a lawyer and have a full-on contract written, but you should always agree on the core terms beforehand, and have them down in writing one way or another; having your correspondence as proof in email or text messages is better than nothing. The core terms would mean things like how much you should be paid, the payment structure (like if you want an upfront fee, or if you should be paid by stages of completion), and the scope of work.

With that, here are some examples of what you can include in your freelance contract to avoid trouble.

The payment terms very simply defines how much you should be paid, and by when. This is where you’ll state whether you’re charging an hourly rate or a flat fee. Some people also state they should be given an upfront payment or payment by stages to make sure they have enough money to follow through with the work.

For example, if you were hired to produce a corporate video, renting filming locations can be expensive, especially if you need to use commercial areas like a race track. Getting the money upfront makes sure you have enough to work around without having to foot a big bill by yourself beforehand.

If you need any special arrangements for payment, the payment terms is where you would want to make those requests. An example would be a specified method of payment (such as by cheque or bank transfer).

Solves: Makes the project more flexible. Prevents any dispute on who owns the copyright to the work.

This is an often overlooked point, but can be very important in some cases. The ownership of the project can affect a lot of things like what it can be used for, the cost of the project, and even who is allowed to use it.

If you and your client don’t specify, there’s a law that is automatically applied for the ownership of a project. Section 26 of the Copyright Act 1987 states that when you’re doing work as an employee, or if you’re commissioned by someone, then your employer or client becomes the owner:

The last part we underlined means that if you want to, you can agree with your client that you will still own the work in the project. You can then license the work to them to use (basically you’re selling them the right to use it). At this point, you might decide on things like what your client can use your work for and how long they can use it (eg. only for this year’s Christmas promotion). Arrangements for these kinds of projects can vary wildly and be industry specific, so you’ll need to find out what works between you and your client.

Meanwhile, you might be pleased to know that your right to be identified as the author is automatic under Section 25(2) of the Copyright Act.

[READ MORE - What is a copyright and how does it work?]

Solves: Releases you from responsibility (liability) for events beyond your control, and freak accidents

An indemnity clause is basically a line in the contract which limits your responsibility (liability) for something. In the case of freelance work, you may want to limit your liability for unforeseeable events. Imagine promoting a carnival where the main attraction is an elephant show. When the show opens, it turns out the elephants are missing, and there are a lot of angry ticket buyers. You probably don’t want to get caught up in that - since it wasn’t really your fault.

An extreme real life example would be the Tropicana rebrand. Some of you might recognize this as the orange juice brand with commercials for “Tropicana Twister”. Back in 2009, Tropicana did a $35 million rebranding exercise to improve their product’s packaging. Instead of having a positive effect, this actually caused a 20% drop in sales (about $30 million). Now, imagine being personally responsible for that.

It’s not everyday you run into a failure that costs so much, but this kind of unexpected event is why indemnity clauses are important.

To be clear, you will still be liable for any damage you cause through negligence - breaching what is called the “duty of care” in law. In simple terms, it refers to a duty to reach a certain standard of work, and take reasonable precautions to make sure things don’t go wrong.

4. The scope of work and timeline

Solves: Prevents “scope creep” and aligns expectations between you and your client on how much work can be done within a certain time

If you ever had a client who constantly adds work onto your tasks with a quip about “it won’t take that long, right?”, you already know what it feels like to have your scope of work creep higher and higher. You charge a certain amount to get a certain scope of work done, so it really feels bad if you end up working on something that keeps getting sent back for add-ons and revisions even after an entire month. You’d probably started resenting the client at this point, which doesn’t make for a good working relationship.

This is where a contract can help by defining the scope of what needs to be done beforehand: We will do XYZ for this amount, and if you need ABC done, we’re happy to help, but we’re tacking on an extra fee. Some people also put in a limitation on how many revisions they provide - the benefit of this is that you get the feedback in one go, and you make sure the revisions will not come endlessly.

You’re probably also familiar with clients who come to you with an unreasonable timeline: a complete TV advertisement in 3 days or something like that. The contract is also where you may want to define an estimated timeline, so that your expectations line up with your client’s. Not only are you limiting how long this project can go on for, your clients may feel more comfortable working with you if you are transparent with them as to what’s going on (giving them progress updates helps).

5. Decide what happens during delays

Solves: Issues of responsibility when there are unexpected delays (like if the client’s priorities shift). Also protects you if your client decides to drop off the radar.

Then comes what many freelancers consider the ultimate headache - you get a project to work on, you’ve started work on it, refined it, and prepared a presentation for your client…..to find that they’ve basically disappeared on you.

Sometimes, it’s because the client’s priorities shifted and they could only get back to you later which, apart from the wasted time, is usually not that big of an issue. But there’s also situations where you don’t hear from them for months on end despite your messages and calls - and then the project gets forgotten entirely. What about all that work you did…? You’ve accepted at this point that you’re most likely going to go unpaid. Oh well.

This is why you need to include provisions stating what will happen if there are extended delays during the project. For example, you might write a term saying that if your client does not get back to you for more than 2 weeks:

This outlines what should happen if the scenario pops up, and your client will have agreed to it by signing the contract with you. If a bad client insists you continue the work, you have your contract to back you up. And if you don’t get paid, you can file a small claims procedure mentioned in our first point if you have to.

The contract would also be proof that you are owed money if say, the worst case scenario happens and your client goes bankrupt or disappears for some other reason.

If you need a proper contract written…

If you work small-time jobs, you might not have the resources to hire a lawyer to get a contract drafted, but the fact that you do small work doesn’t change the importance of protecting yourself legally. To paraphrase what some businesspeople have said to this writer: you don’t need that contract if everything goes well, it’s to protect you if things go wrong. Having some form of proof that you had an agreement with your client will help you substantiate any claims you may need to make later on.

While contracts can be written in plain language, they should be written clearly and not be ambiguous. This guide on WikiHow might be useful if you want to write your own contract.

That being said, it can help for you to consult a lawyer about the contract to make sure you’re covered in any areas of law you don’t know about. Another option is to explore sites like And Co, they have a complete toolset to make life easier for freelancers from invoicing to a customizable contract. You could also check out sites like TheContractShop for specialized solutions to your freelancing needs.

Of course, the other thought brewing through your head may be “What if client don’t want to sign? Stupid article!!!!”, to which our response will be - you shouldn’t take them on. If a client isn’t willing to sign or even negotiate a contract, what are the odds of them being a good client without one?