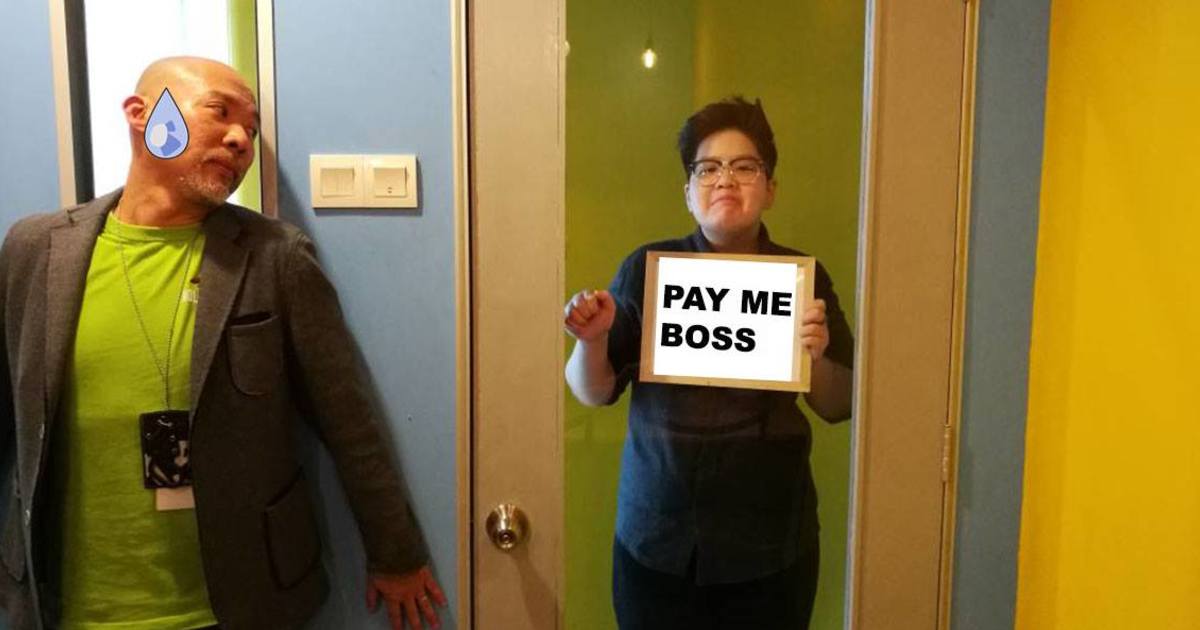 If your boss refuses to pay you in Malaysia, what can you do?

Let’s begin by sitting back and imagining two scenarios:

Scenario 1: Taking the elevator up to the floor your office is on, lukewarm coffee in your hand, you smile a little as you’ll finally be paid for the last three months of work. You haven’t been paid for three months, and your boss promised you the money this month, all in one go. To you surprise, your boss is waiting for you at your cubible. “I’m sorry, Jimmy, your pay will have to wait a week,” said your boss.

Scenario 2: You hate your company you’re working for now, and you’ve been thinking of leaving for the past few weeks. Lo and behold, another company makes you a better offer; higher pay, better benefits, all the bells and whistles. You resign, and begin working at the new company. Wait a minute, your previous company still owes you half a month’s wages, and they refuse to pay you.

What in tarnation? In both cases, you’re broke, and this is also the proverbial straw that broke the camel’s back. Is there anything you can do?

Yes, turns out that there is

Before we get into the nitty gritty, there’s a catch. How we usually use the word “employees” is different from how it is used in the legal field. The Employment Act 1955 (Peninsula Malaysia only) applies to “employees” - defined as people who are earning less than RM2000 monthly. However, all is not lost. Section 69 of the Employment Act 1955 allows the Director General of Labour to settle disputes regarding wages for employees with monthly pay of up to RM5000. Also, if you’re a manual labourer, it doesn’t matter what your salary is. There’s a different Act governing people who earn above RM 5000 a month but that’ll be covered later in the article.

So… when is your boss supposed to pay your wages?

You are supposed to be paid within 7 days

Subject to subsection (2), every employer shall pay to each of his employees not later than the seventh day after the last day of any wage period the wages, less lawful deductions earned by such employee during such wage period.

This means that you are to be paid within 7 days after the last day of any wage period (usually a month), meaning that your salary for October should be paid by the 7th of November. The example in the introduction (3 months of nonpayment) is a very extreme violation of this section.

When you quit or get fired

Section 20 gives us the law on payment of wages on normal temination of contract:

This means that when your contract with your company is done, and you’re leaving, your wages must be paid on the day on the termination of the contract of service.

When you quit or get fired without notice

If you DO terminate (or are terminated) without notice, you have to pay (or be paid) the sum that would have been accrued for the period of that notice under section 13(1). An example of this is if you were fired without notice, and the notice was supposed to be for 4 weeks, you would be paid including that period of 4 weeks.

Another situation is when there is a breach of the condition(s) in the contract of service under section 13(2). Misconduct by the employee [section 14(1)] and the employee being placed under risk that he didn’t sign up for [section 14(3)].

All of the information the above two paragraphs brings us to section 21.

TL;DR: When a contract of service is terminated, the employer has to pay their now ex-employee the wages they have earned in a set amount of time. Also note that the Employment Act only applies in Peninsular Malaysia and Labuan.

What if they don’t pay or refuse to pay the wages?

What steps can you take to recover your wages?

Monthly wages of RM 5000 and below

There are a few options available. For the people whose monthly wages are RM 5000 and below, you can seek redress through filing a claim in the Labour Court. What is the Labour Court, you ask? It’s not a court, at least not in the traditional sense. Here it refers to Inquiries before the Director General of Labour as set out in section 69 of the Employment Act.

Lets kick it up a notch. What if you earn MORE than RM 5000 a month as an employee? We look to the Industrial Relations Act 1967 for answers. Section 2 of the Act defines what a workman is:

...any person, including an apprentice, employed by an employer under a contract of employment to work for hire or reward and for the purposes of any proceedings in relation to a trade dispute includes any such person who has been dismissed, discharged or retrenched in connection with or as a consequence of that dispute or whose dismissal, discharge or retrenchment has led to that dispute.

So as long as you are an employee, you are considered a workman under the Act. You’re still covered! If you and your boss can’t settle things, the Industrial Relations Department will step in.

Most disputes involving wages involve (relatively) small amounts of money, so it’s not really worth hiring a lawyer to represent you. It’s totally fine to just represent yourself and don’t worry, because it’s not as formal as traditional court proceedings. The only time you’d need legal representation is when the case gets appealed to High Court or above.