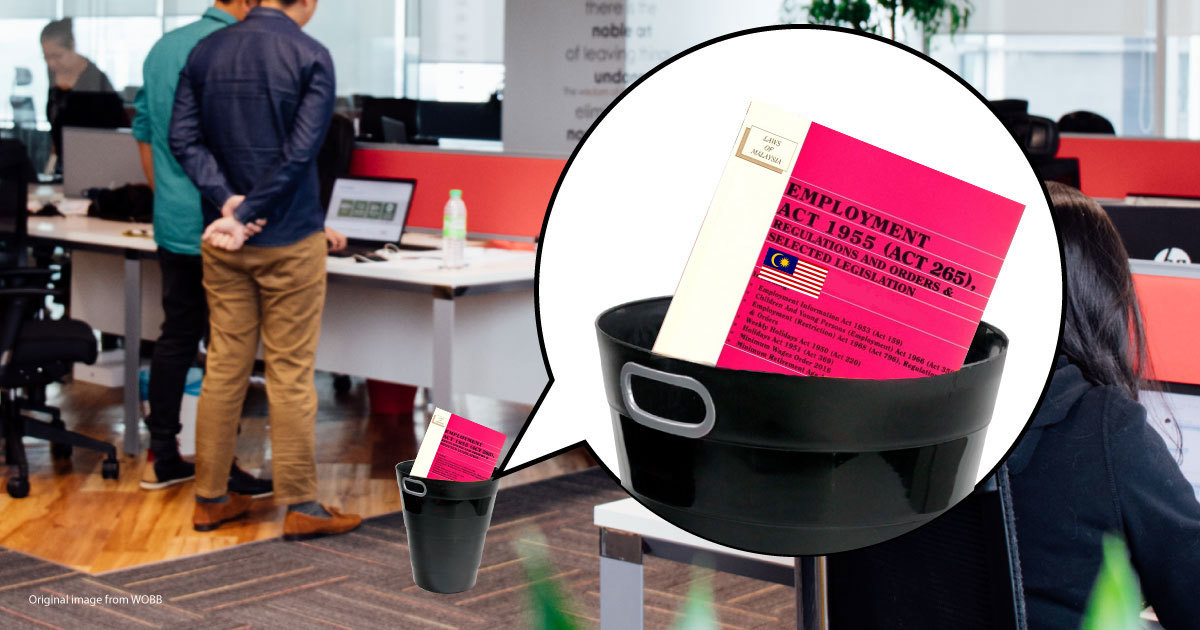 Malaysians generally know that when you open a business, there are a lot of rules and regulations that you need to follow. When the Raj Banana Leaf incident with washing plates in potholes happened, we were reminded (or informed for the first time) that food and beverage businesses need to get their food handlers vaccinated for typhoid and send them for training. While this highlighted the infringement of one little-known rule, little do most of us know that some businesses are busy breaking the rules elsewhere, pretty much all the time.

Not all of these are outright “crimes” which they can get in trouble with the government for, but some businesses may assert rights that they don’t actually have. The most widespread is probably right inside your employment contract…

1. Your ex-employers can’t stop you from competing against them

Employment contracts often include a section called something along the lines of “non-competition” or “restriction of trade”, which will go something like this:

“After the termination of employment for any reason whatsoever, the employee shall not for a period of 12 months from the date of termination carry out any business of any nature that is similar in nature to or is in competition with the employer.”

It’s called a non-competition clause, and what it wants is to make sure you don’t join or start a business that competes with them. Since you’ve been working with your ex-employer for some time and presumably have picked up some tricks of the trade, they probably don’t want you bringing that over to a competitor. But…is this contract term legal?

Yes, and no. The non-competition clause is, in most cases, more bark than bite - it’s not illegal for your employer to put it into the contract, but it also has no effect in Malaysia due to Section 28 of our Contracts Act 1950, which says:

“Every agreement by which anyone is restrained from exercising a lawful profession, trade, or business of any kind, is to that extent void.”

Businesses still put this clause in their employment contracts as a safeguard, just in case anyone has any smart ideas about setting up a competing business to take advantage of them. In Malaysia, these non-competition clauses normally only work between business partners. So don’t be fooled, you can join whatever business you want after leaving your previous boss.

What you can’t do is take away sensitive data like client details away from your employer, which would be considered “trade secrets” that you should not be using after resigning. Doing so could get you in trouble for breach of confidential information, and yes, your ex-employer can sue you for that.

[READ MORE - What qualifies as "confidential information" in Malaysia?]

You can get the details about non-competition clauses at our previous article below:

[READ MORE - Can Malaysian employers stop their ex-staff from joining a competitor?]

2. Shops are not allowed to charge extra when you pay by card

We’ve all been there before: you go to a store to get some supplies or a new gadget, and when you’re paying at the counter, the cashier informs you that there is a 2% surcharge for paying by credit card. And you’ve probably asked at some point: Are they even allowed to do that…?

Whether or not it’s allowed depends on the merchant agreement between that shop and their bank which provides their credit services. Truth be told, the agreements usually specifically state that shops are not allowed to impose an extra charge on customers for paying by card.

Shops that do so are actually in violation of their contract with their bank, and the bank has the right to terminate their services. You can report offending shops either to their bank (which you can see from the receipt you get after paying), or to Bank Negara by calling 1300-88-5465, or sending your complaint to bnmtelelink@bnm.gov.my

[READ MORE - Is it legal for Malaysian shops to charge you extra for paying by card?]

3. Getting customer contact details with tactics that violate the PDPA

A gym calls you out of the blue to offer you membership promotions, and you don’t even know how they got your number. You later find out that a friend of yours was offered coupons in exchange for listing the contact details of two friends.

This is illegal according to our Personal Data Protection Act 2010 because they did not get your permission to collect and use your contact details - they got your friend to cough it up. It’s technically not illegal for them to ask for your contact details, but it becomes illegal the moment they store your data and use it.

[READ MORE - How does the Personal Data Protection Act work?]

If this kind of scenario ever happens to you, you don’t go after your friend, but know that you can report these companies to the Department of Personal Data Protection.

[READ MORE - Can friends "refer" your contact to companies without your permission in Malaysia?]

4. Simply claiming something is “limited edition”

You see this pretty much anytime there’s a promotional campaign going on and a company is giving away some gifts and prizes for your participation:

Guess what? Only one of those slogans is legal. Section 15 of the Consumer Protection Act 1999 states clearly that it’s illegal to call something “limited” unless there’s a maximum amount available, or it’s only available for a short period of time. Further, consumers must be shown clearly exactly how many are available, or exactly how long the goods will be available.

Common as no-refund policies are, most consumers don’t know that a majority of them are actually illegal for companies to impose, especially when they are without a good reason.

The Consumer Protection Act 1999 has some laws covering what’s called “unfair contract terms”, which can include an unreasonable no-refund policy. They could apply in a variety of situations where the shop has to give you a refund, such as when you were given the wrong size of shoes, or if a no-refund policy applies to items on sale rather than just to underwear (that’s acceptable for hygiene purposes), or even when you are cancelling an ongoing membership (they have to refund the remaining months, by law).

You can file any complaints of no-refund policies with the Domestic Trade, Cooperatives and Consumerism Ministry (KPDNKK) over here, or file a claim with the Tribunal for Consumer Claims Malaysia.

6. Playing music in their store without proper licensing

We don’t even think about this or question it on an everyday basis - businesses play music to attract customers and provide atmosphere, and that’s about it. But actually, they need to get a license from the artists to use that music, especially because they’re running a business (and not using it for non-profit reasons).

This isn’t the kind of license like getting a business permit from the government, but is more of the fact that the music is copyrighted - that is to say, owned by some people like the artist and the recording company, and you need to “buy” the permission to use the music from them.

Normally, a business owner would need to get a license from each and every artist whose songs they play. This can feel really tiresome and hassling, but the other option is to risk copyright lawsuits. Some business owners might not have even realized that they need to get licenses in the first place, but they should correct that situation as soon as they can, because “I didn’t know” is not an acceptable excuse in court.

Fortunately, there are licensing bodies like Music Rights Malaysia and Soundtrack Your Brand, which act like a central licensing agency so that businesses won’t have to contact so many different artists to license songs.

[READ MORE - Is it illegal for Malaysian shops to play music without a license?]

7. Treating workers who are actually “part-time employees” as “freelancers” instead

You may have worked as a freelance promoter before, and were used to the notion that you would be paid a fixed amount each day. Maybe you’d get an allowance, and you don’t have any EPF or SOCSO contributions - pretty standard and normal, right?

Except, this arrangement is actually illegal according to our labour laws. According to the legal criteria, a lot of “freelance promoters” actually qualify as employees because they are usually given rules and orders to follow, a sales script to adhere to, and generally have little control over how and when they do their job.

If a company hires a promoter but treats them as a freelancer instead of as an employee, they could be taken to the labour court by the employee and forced to pay a few months salary as compensation for early termination, depending on the arrangement (the conditions can be a bit too complicated to explain simply). They’d also be liable for not paying EPF, SOCSO, as well as EIS for the promoter, and therefore be committing other offences…

If you ever need to hire freelancers, it’s best to check whether the job scope you require falls under employment or freelancing to avoid any trouble later on. Similarly, if you’re a freelancer, you might want to know if your job description falls under part-time employment.

[READ MORE - How do you tell if someone is considered a freelancer, or an employee?]