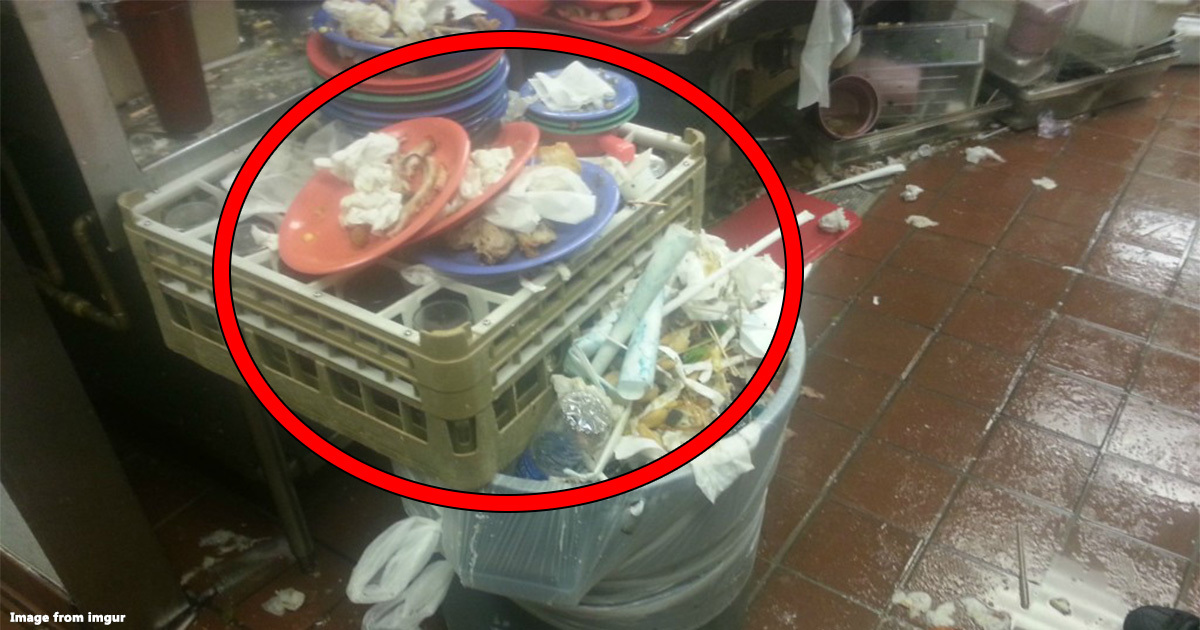 What can Malaysian authorities do against dirty restaurants besides closing them down?

You’ve probably dined at an establishment that was a little unclean before. Whether it was finding a fly in your drink, or seeing a rat suddenly scurry across the floor, these scenarios are experiences we’ve probably had from time to time. But that doesn’t make it any more acceptable. Food and Beverage establishments have problems that are difficult to tackle, but they must be solved nonetheless as the potential health issues can be pretty serious.

But there’s also those “what on earth” scenarios like with Raj’s Banana Leaf Restaurant that had workers washing plates in a pothole, and did not vaccinate their workers for typhoid as required by the Food Cleanliness Regulations 2009. They’ve since been shut down by DBKL’s health officers, but you might be wondering why they were allowed to operate like that for so long.

You’ve probably had to endure cases of food poisoning and tolerated dirty premises with no idea what action you can take against these errant restaurant operators. So, what exactly do the health officers do as enforcement against dirty restaurants anyway?

Health officers can order clean-ups and close restaurants down

The people in charge of health inspections are the “authorized officers” under the Food Act 1983. They are defined as:

“...any medical officer of health or any assistant environmental health officer of the Ministry of Health or of any local authority, or any suitably qualified person, appointed by the Minister to be an authorized officer under section 3”

These health officers have many powers under Section 4 of the Food Act, and they include the following:

On top of that, Section 10 also empowers health officers to order a restaurant to clean up their premises and appliances within a certain period of time. If the place is not cleaned within the time limit, they can also prohibit the restaurant from operating until it’s cleaned. Opening the restaurant without first cleaning it is a crime and the punishment is a fine and/or up to 5 years of prison.

Then, perhaps the most familiar power to us is that they have they can force-close unhygienic premises. Section 11 of the Food Act states that health officers can order a restaurant to close for up to 14 days. Failure to comply with this closure is also a criminal offence and carries a penalty of a fine and up to 5 years of prison as well.

As with so many other areas of our laws, we actually some pretty good laws in place that were lacking in enforcement for one reason or another. For example, according to former DBKL Health and Environment Department director Dr Hayati Abdullah, there’s actually a lack of resources for them to perform the enforcement, but they still have to keep to the inspection schedule. While allocating more resources to the local councils is not something we citizens can do, we can definitely keep enforcement accountable - by making complaints. You don’t really want to wait for a routine check for an unhygienic restaurant to get caught, so who do you go to?

You can lodge complaints with your local council

From what we know, the people who are usually doing the checks and enforcement are officers from your local council, like MPSJ and DBKL. As an example, Subang Jaya resident can voice their concerns to MPSJ through a login service, filling out their online form, or making a phone call. Look for how to contact your local council, and make a report with them so they can take action on those unhygienic food premises.

You can also file your complaint with the National Consumer Complaints Centre, which makes complaints and claims on behalf of Malaysian consumers.

Scenarios you can make a report about are not just limited to when you actually get food poisoning, but also include:

The penalties depend on exactly what offence was committed, but the highest goes up to RM100,000 in fine and up to 10 years of prison. And if you’re concerned, there’s another avenue of complaint if no action is taken by your local council - you can further lodge a report with Ministry of Housing and Local Government (KPKT) here.

You should lodge a report even for cases when the restaurant operators say “we didn’t mean to” or “it was an accident” because it is their legal duty to ensure that their food is safe. Section 23 of the Food Act 1983 states that if they are found breaking any food laws, operators must prove that they took all reasonable steps to make sure the sale of their food will comply with all legal requirements of the Food Act.

[READ MORE - What can you do if you bought spoilt or contaminated food?]

Those preventive measures are usually decided upon by the managers or owners of the restaurant, and yes...

Usually, the people responsible for unhygienic practices in the end are the ones in charge of handling the food. But in the case of Sendirian Berhad and Berhad companies, the Food Act 1983 also imposes an extra responsibility on any person who was a director, manager, secretary or anyone of equivalent rank. Section 33A makes those people liable for the offence as well, and they can be found guilty unless they prove that the offence was committed without their knowledge or permission, and that they took all reasonable precautions to prevent the offence.

So as an example, unless a restaurant manager can show that he trained his workers in how to handle the kitchen properly and has supervised them to see that they carry it out, the manager can also be held responsible by law if the kitchen is ridden with flies and roaches.

You may have seen incidents of unclean restaurants getting closed down by the local council, only to open again not long after, as dirty as ever. While we can’t comment on whether any illegal dealings happened or not, you can help be a part of enforcement by simply calling incidents out -  whether it’s a restaurant that hasn’t bothered to clean their toilet in a while, a banana leaf restaurant that washed dishes in potholes, or a restaurant that mysteriously got “closed down” but is back up and operating the very next day.

Hold a high standard when it comes to the food served to you and keep those complaints coming. If you’re dissatisfied with health inspection standards, express your opinion so that the government agencies know that this is an area for improvement. From this report on The Star, it looks like MBPJ has been cracking down on dirty restaurants for offences like having rats and cockroaches, using the backlane to wash dishes, and dumping waste water directly into the drains.

The Star has also invited the public to take pictures of dirty eateries and send the photos to them for follow-up with the authorities.