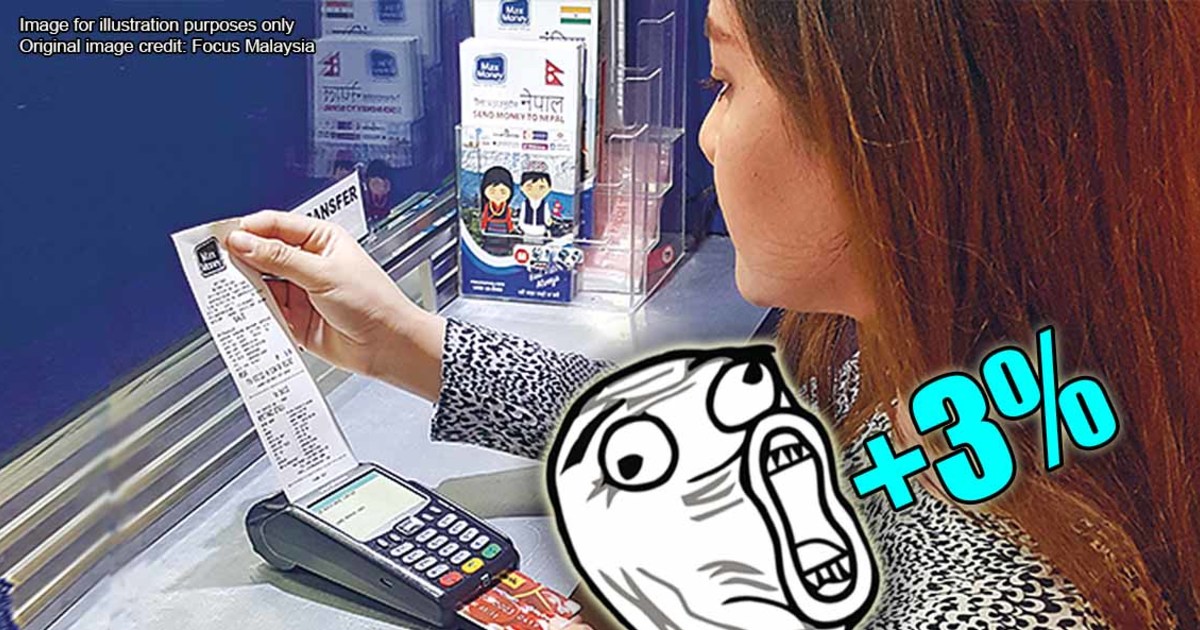 Is it legal for Malaysian shops to charge you extra for paying by card?

You’re out doing some shopping which you’ve been putting off for the longest time because of work. After your retail therapy lust is satisfied, you head over to the cashier but, in your excitement, realized that you forgot to withdraw cash. So you pull out your nifty credit card to pay for the goods that you didn’t really need in the first place.

This is when it might happen - the cashier tells you that the shop imposes an extra charge on top of your bill if you pay by card. The extra charge is usually 1-3%, and can be waived - only if you pay by cash, which defeats the purpose of paying by card. You might have thought twice about paying by card at that point, and might have even hurried off to the nearest ATM machine to withdraw cash to make the payment.

But why do shops do this at all? In the first place, are they even allowed to charge you extra for paying by card?

Well, you may not know this but...

Shops are charged by their bank whenever you pay by card

To process a card payment, shops are actually charged a certain amount by their bank known as a “MDR” (Merchant Discount Rate). The exact amounts that a bank charges may differ from bank to bank, and debit and credit cards are also charged differently. But there are actually regulations made by Bank Negara in the Payment Card Reform Framework (PCRF) to limit the cost of card payments on Malaysian shop owners.

Paragraph 8.1 of the PCRF limits how much shops are charged for payments made by local debit cards. It states that banks cannot charge shops more than-

It’s apparently more expensive for shops to accept your credit cards. In Paragraph 8.4 of the PCRF, shops can be charged up to 1.1% of credit card transactions if their payment network has established a “Market Development Fund”, or up to 1% without. To keep this topic on track, we won’t be explaining the Market Development Fund, but you can read more about it in Paragraph 8.4(b) and (c).

Shops cannot transfer the MDR cost to customers by charging them, because.…

Since shops are charged whenever you make a card payment, it obviously takes up a little bit of their profit. Shopkeepers who don’t want to bear these extra costs might make their customers pay for the difference, but it’s not allowed for 2 reasons.

The contract with their bank doesn’t allow it

When shopkeepers sign up to have a bank process their card transactions, they signed a contract their bank. That contract contains a long list of things they promise to do and not to do. And one of those things they promise is to never charge their customers to pay for the MDR.

And here’s the section from Maybank’s Merchant Card Service agreement.

The shop will have breached the contract with their bank. And if the bank so chooses, they can terminate their card processing services - which means the shop will not be able to process card payments anymore.

Here’s something that might surprise you: shops are actually allowed to tell you they prefer debit or credit cards, and also whether they prefer cards from certain banks!

This regulation in the PCRF is actually a restriction on the banks themselves. Banks aren’t allowed to stop shops from encouraging customers to use certain types of cards. And what shops can do to “steer” (encourage) their customers towards using those cards is specifically mentioned in the regulation.

Shops are actually allowed to indicate a card preference to their customers, and even offer discounts and benefits for using a certain card with them. But they are still not allowed to impose a surcharge on card payments.

The PCRF also states in Paragraph 9.4 that banks must stop shops from charging customers for paying with debit cards and international prepaid cards. As for credit cards, banks have the option of restricting shops from charging as well, but are not required to.

Here’s how you can report offending shops

If you ever get charged extra on top of your shopping bill because you paid by card instead of cash, you can report the incident to the bank which processes the card payments for that shop. You’ll find this information on the transaction slip that you’re given after you pay.

You can also report offending shops to Bank Negara by calling 1300-88-5465, or sending your complaint to bnmtelelink@bnm.gov.my