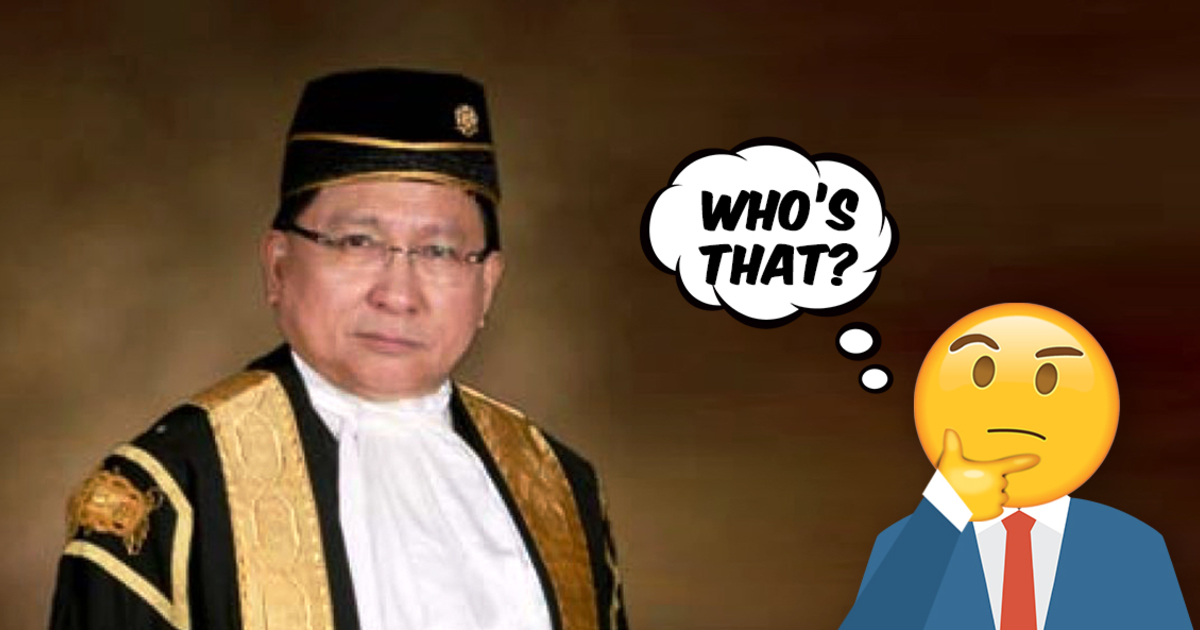 Malaysia has a new Chief Justice… But what does he do?

After the appointment of a new Attorney General - Tommy Thomas, Malaysia is also getting a new Chief Justice in Tan Sri Richard Melanjum, who will be Malaysia’s first ever Chief Justice from East Malaysia.

We’ve covered the role of the Attorney General - who is basically the government’s head lawyer - in an earlier article...

[READ MORE - What does the Attorney General of Malaysia do?]

So what about the Chief Justice?

The Chief Justice is the Head of Malaysian Judges

The role of the Chief Justice (CJ) is defined by our Federal Constitution itself, under Article 122(1):

The CJ’s functions differ from the Attorney General (AG) mainly in that they work in different branches of government. The AG advises the government on legal matters, and brings forth criminal cases to be prosecuted; while the CJ is the head of the judges (a bit like their General Manager) - who will be hearing and judging those criminal cases, as well as any other court case in the country.

[READ MORE - What are the different ranks of courts in Malaysia?]

[READ MORE - Can judges get sued if they make a mistake in Malaysia?]

You’d be right to think that not every Tom, Dick, and Harry can become the CJ, so what qualifies you?

The CJ is hand-picked by the Agong

There are 3 things required to become the Chief Justice, which get progressively harder to fulfill:

If that last point confused you, basically the Agong is advised by the Prime Minister on who should be appointed as the Chief Justice, then the Agong consults the Conference of Rulers before making a decision. After being appointed, the CJ takes an oath provided in the Sixth Schedule of the Constitution:

The CJ is consulted on for certain matters related to the judiciary, one of the most important among them being who gets to become a judge.

Every judge of the Superior Courts (the Federal Court, the Court of Appeal, and the High Court) of Malaysia is appointed following the procedure in Article 122B(1). They’re appointed by the Yang di-Pertuan Agong, acting on the advice on the Prime Minister - but only after consulting the Conference of Rulers. But when those judges are appointed (other than the Chief Justice himself), the Prime Minister also has to consult the Chief Justice before proceeding…

That’s one extra step more complicated than how the Chief Justice is appointed, so don’t worry if your head spun at that - we’ll try to break it down further:

There’s actually a Judicial Appointments Commission  set up to recommend candidates to the Prime Minister, but we won’t get into that detail for now.

The Prime Minister, or the Chief Justice after consulting the Prime Minister, can also recommend the Agong to remove a judge of the Federal Court. Usually this will be on grounds of misconduct or inability due to a mental or physical illness.

The CJ also sits in the Special Court, which tries cases involving royalty

If you’ve ever wondered if the royals of Malaysia are above the law - you have your answer now. We actually have a Special Court set up through Article 182 of the Federal Constitution, which is set up to hear trials involving the Yang di-Pertuan Agong, or the Ruler of a State for any crime committed, as well as any civil proceedings (if for some reason the Agong trespasses on your private property and you want to sue him, for example). The only bar is that no legal action can be taken against the Agong or a Ruler unless the Attorney General consents to it (as per Article 183).

The judges who comprise the Special Court are the Chief Justice, the Chief Judges of the High Courts (of Malaya, and of Sabah and Sarawak), and two other judges with experience in the Federal Court or a High Court, who are appointed by the Conference of Rulers.

Having a high position means… a lot of approvals come from the CJ..

[READ MORE - What is a Malaysian Commissioner for Oaths and what do they do?]