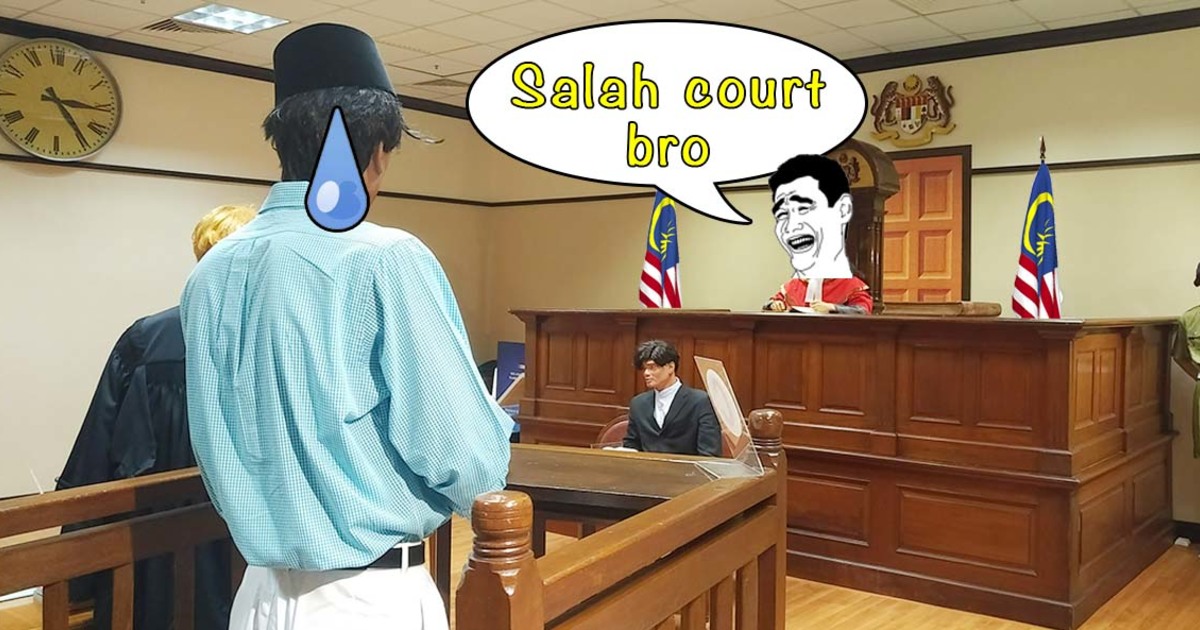 Why does Malaysia have different courts and what do they do?

You should probably know that Malaysia has a court system with different types of courts that handle every case under the sun. Pick up a newspaper and you’ll see someone being charged in the High Court, appealing in the Federal court, or appearing in the Magistrates’ court.

However, have you ever wondered how or who decides which cases go to which court? Is there a ballot system, lucky draw, or a first come first serve?

Well, actually, a court hierarchy exists with specific rules on what cases can be brought to which courts. For the purposes of this article, we will be focusing on the civil courts system and not the criminal court system (which will be dealt with in a separate article). For reference, the civil system is basically about private law suits where you sue someone. The criminal system is when someone charged with a crime is tried in court to determine his innocence or guilt. Also, we won’t be including the Syariah or Native Courts in this article.

To kick things off… 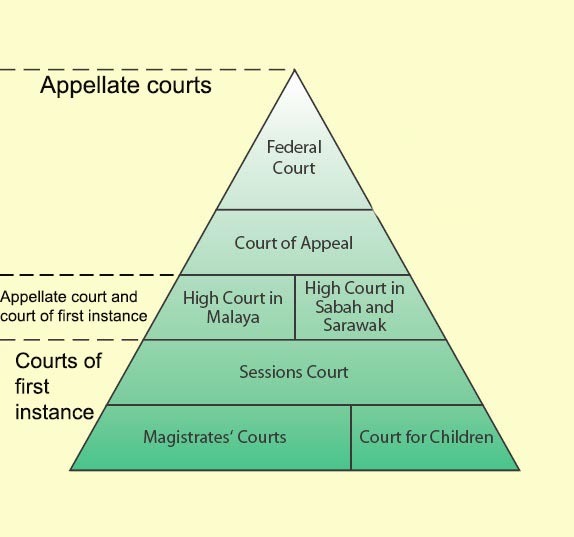 The court systems are built in a hierarchal system in order to facilitate the hearing of cases and any appeals against them. Beyond having a hierarchy, the courts are also divided into courts of first instance and appellate courts.

Courts of first instance are where matters are heard for the first time.

Courts which fall under this category are the Magistrates’ Court, Sessions Court, and High Court.

Appellate courts hear matters on appeal from the courts of first instance and only have the power to listen to appeals. This means that they only listen to matters already decided instead of deciding on new points or deciding on findings of fact.

There are limited exceptions to this general rule but we will take a look at them later on in this article.

The courts which fall under this category are the High Court, Court of Appeal, and Federal Court.

Yeah, we know that the diagram doesn’t answer many questions but with that picture in mind, let’s dive into the respective jurisdictions of each court to better explain it. 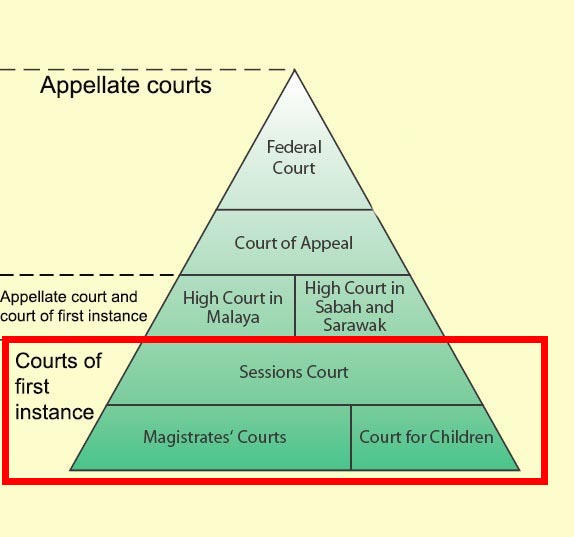 The Sessions Court on the other hand, has a jurisdiction to listen to cases where the amount or value of the subject matter in dispute are up to RM1,000,000. However, the Sessions Court is given unlimited jurisdiction for cases involving motor-vehicle accidents, and they cannot decide on cases which involve disputes about land titles. If this sounds confusing, here are some examples:

Ali and Abu enter into a contract.

Abu breaches the contract and Ali sues him for damages amounting to RM900,000

Ali can sue Abu in the Sessions Court.

Ali was crossing the road when a car driven by Abu knocks him down.

Ali can sue Abu in the Sessions Court

Ali owns a piece of land that Abu has stayed on for 20 years.

Ali tells Abu to move because he is a squatter.

Abu claims that Ali’s father gave permission to Abu to stay there in return for clearing the land.

Now, if you are confused about why the Magistrates Court and Sessions Court are listed in the alternative, the answer is simple. If your claim exceeds the Magistrates’ Court’s jurisdiction, then you have to sue your opponent in the Sessions Court. The same idea applies if your claim exceeds the Session Court’s jurisdiction – you then have to sue in the High Court. The High Court is a little special because…

The High Court has unlimited power! 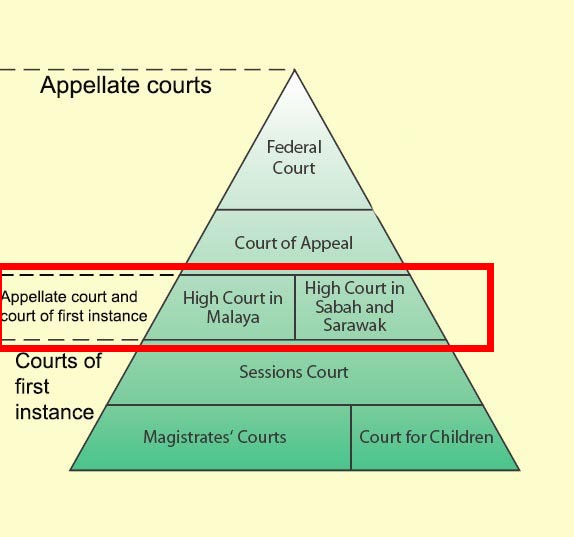 No, seriously. The High Court has unlimited civil jurisdiction and is technically considered “higher ranking” than the Magistrates’ Court and Sessions Court, which are both known as inferior courts. This isn’t a jab at their ego because the terms are established by our Federal Constitution. Article 121 reads:

Unlimited civil jurisdiction doesn’t mean that the High Court can do whatever they like. They must, of course, act in accordance with the law and pass out appropriate judgments. What unlimited civil jurisdiction means is that they don’t have a limit as to the value of claims they can decide on. If Ali wants to sue Abu for running him over with his car, setting his RM2,000,000 mansion on fire and refusing to vacate his land, he can sue Abu in the High Court.

This brings us to our two last courts which are… 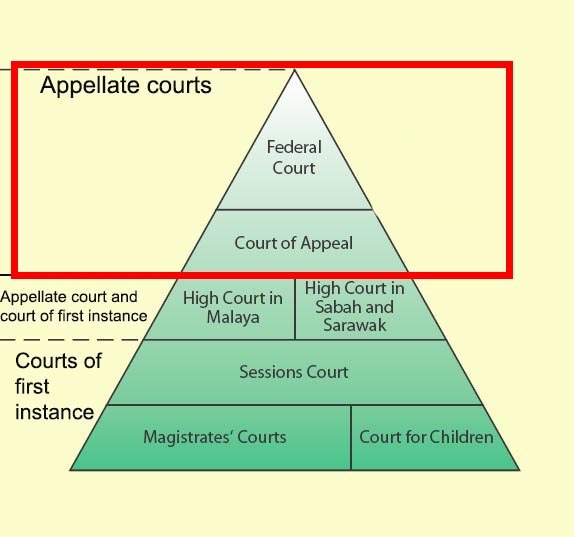 For instance, if you’re bringing a fresh lawsuit against Ah Kok for scratching your car, you cannot start in the Court of Appeal or Federal Court. However, if Ah Kok isn’t happy with the Magistrates’ Court decision that he should pay you RM5,000 to fix the scratches, he can make an appeal to either of these courts.

We will cover more about the appellate process in a separate article but for now, we hope this article gave you some insight into how court systems work in Malaysia!