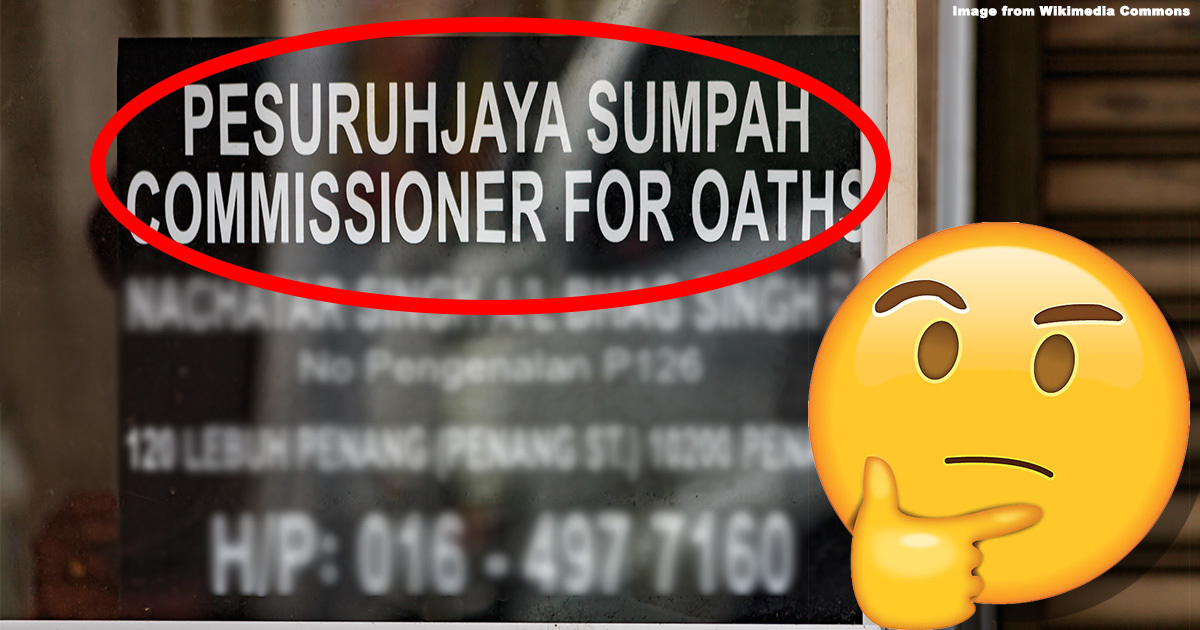 What is a Malaysian Commissioner for Oaths and what do they do?

Have you ever seen these signs in shoplot areas saying “Commissioner for Oaths” (“Pesuruhjaya Sumpah”)? You’ve probably always wondered who these people are and what exactly do they do.

Their title sure sounds fancy and prestigious, but what oaths do they commission exactly? Is it like the guy who makes people swear on a holy book to tell the truth? Do they make people swear the kind of oaths that involve a lot of vulgar words??

Actually it’s nothing like that. They sit in an office, and they sign and stamp a lot of documents.

In Malaysia, Commissioners for Oaths (CoO - not to be confused with Chief Operations Officer) come in two varieties - the lawyer and the public officer. It’s a complex list but basically, they affirm and verify documents and statements that will be used as legal proof in one way or another.

According to the Commissioners for Oaths Rules 2018, CoO-s have the power to perform the below (lawyer-only powers in red):

If you’re married, you might have realized at this point that you came to one of these Commissioners to certify your marriage as well.

How do you become a Commissioner for Oaths?

The Commissioners for Oaths Rules splits the criteria for a person to become a Commissioner for Oaths into two parts - qualifications, and who is a “qualified person”.

The qualifications to become a CoO are fairly basic:

Those don’t sound too difficult to achieve, but being a “qualified person” is makes the position of Commissioner for Oaths quite exclusive. The only people who are qualified are:

Upon submitting an application, the Chief Justice of the Federal Court makes the decision whether to accept you as a Commissioner, and according to Rule 4 of the CoO Rules, you may have to take an exam as well as pass an interview before you get accepted.

So, what makes the job important and why are the criteria so stringent?

They need to make sure you understand what you’re signing

Imagine signing a court testimony without knowing there’s a mistake inside, and then getting into trouble with the judges. If you can’t explain the mistake, you could get in trouble for perjury - deceiving the court under an oath to tell the truth, and get punished under the Oaths and Affirmations Act 1949.

To prevent cases like that, Commissioners for Oaths are required to take a few precautionary measures stated in Rule 11 of the CoO Rules. They’ve got to make sure that you understand every statement made in the document, and the consequences of you signing it. If you don’t, it’s part of their duty to read over and explain the documents to you. Having legal knowledge or experience with governmental procedures helps a Commissioner fulfill this part of their duty.

The Commissioners also verify the identity of a person who wants to certify a statement. This usually is to make sure there are no mistakes, but because they also watch for people who want to commit fraud. They also check if a person is suspicious and then refuse their services to anyone they have credible reason to suspect as being involved in crime.

Are they expensive to use?

According to this chart in the Second Schedule of the CoO Rules, Commissioners for Oaths’ services aren’t all that expensive. But according to a lawyer on LoyarBurok, they used to charge a lot less - only RM4 for an original affidavit (RM2 for a copy), and RM2 per exhibit (RM1 per copy).

As for what happens to the money they collect, Commissioners for Oaths who are public officers or officers of a statutory body have to give the money to the Federal Consolidated Fund (the same fund that we pay our taxes to, think of it as the government’s general savings account). But Commissioners who are also lawyers get to keep their fees as a little bit of extra cash.