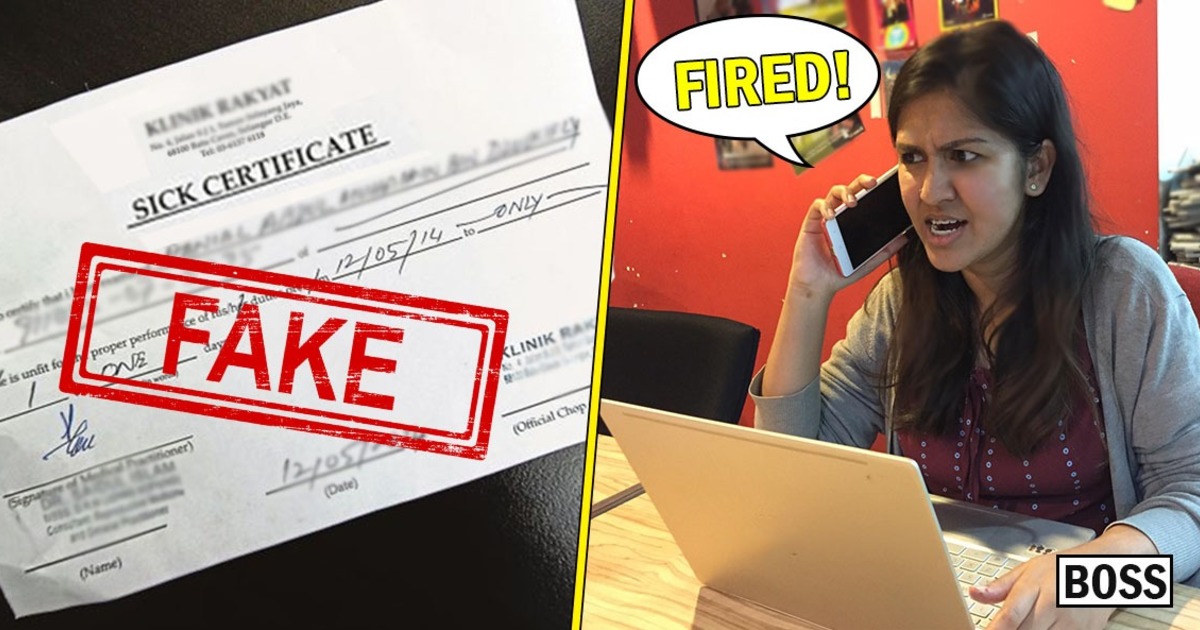 In Malaysia, you can be fired AND jailed for submitting fake MCs. Here's how

It’s finally Friday! But you’ve literally no motivation to get out of bed today. You think about the amount of paperwork you have to settle at work—which makes it worse for you to get ready in the morning.

You finally make a decision to skip work and just enjoy yourself...by going to a theme park! All you need now is an MC from the nearest clinic and your plan becomes foolproof!

You head to the office on Monday to submit your MC to your boss—but you see him react completely cold towards you. You hand him your MC, while he hands you a letter of termination at the same time. Your boss goes on to tell you that you’re fired for submitting a fake MC...as he saw you live-streaming yourself at the theme park on Friday. He adds on that there will be legal action taken against you for falsely handing in a MC.

[READ MORE: Are Malaysian employers allowed to fire you for social media posts?]

You wish you didn’t live-stream your holiday now, but it’s a tad bit too late. The question you might have now is: Can you be fired AND jailed for taking a fake MC(s) in Malaysia?

Your company CAN fire you for misconduct

We previously wrote an article on whether employees can take as many MCs as they want, or not (read here). You’re technically entitled to sick leaves, as it is the right of an employee to take leave when they’re unwell. Section 60F of the Employment Act 1955 states as such:

“(1) An employee shall, after examination at the expense of the employer...be entitled to paid sick leave...where no hospitalization is necessary.”

Every employee is entitled to a minimum of 14 days of sick leave per year (If you’ve worked less than 2 years). The total number of sick leaves you can take would increase over the years you work. The Act further states that you need to get an MC from the doctor in order to apply for sick leave.

However, if you take MC without actually being sick—and your company comes to know about it, they can fire you for misconduct. Section 14 of the Employment Act 1955 states as such:

Section 14 of the Employment Act (in part)“

An employer may, on the grounds of misconduct inconsistent with the fulfilment of the express or implied conditions of his service, after due inquiry—
(a) dismiss without notice the employee;
(b) downgrade the employee; or
(c) impose any other lesser punishment as he deems just and fit, and where a punishment of suspension without wages is imposed, it shall not exceed a period of two weeks.”

Dismissal for misconduct requires no notice period under the Act. This means that your company can fire you if you commit a misconduct. But this can also depend on how severe the misconduct is.

Misconduct is considered anything that goes against the terms of your employment: Your responsibilities towards your company. For the misconduct to be “severe”, the law says that it must be so serious that after investigation—the employer finds that your actions have damaged the relationship of good faith between you and the company.

So the whole act of faking your MC can be said to have harmed your relationship with your company—which gives them the authority to fire you.

You can ALSO be fined and jailed for faking MCs

In Nadimuthu V Public Prosecutor [1972], the employee, a railway worker from Sentul had falsely taken two MCs and was fined for under the Prevention of Corruption Act 1961 (now known as the Malaysian Anti-Corruption Commission Act 2009).

The offence now falls under Section 18 of the MACC Act 2009, which states as such:

“A person commits an offence...with intent to deceive his principal, any receipt, account or other document in respect of which the principal is interested, and which he has reason to believe contains any statement which is false or erroneous...and is intended to mislead the principal.”

Basically, the Act says that anyone who misleads his “principal” (employer in this case) with false documents, is making an offence under the Act. The judge in the case further went on to say that MCs fall into the category of other documents:

To my mind, such certificates must be construed as having come in the category of receipt, account, etc., and for purposes of section 4(c) of the Prevention of Corruption Act, 1961, the words "other document" shall include such medical certificates.--Justice Abdul Hamid.

The employer, Nadimuthu was fined for the two fake MCs taken by him. Section 24(2) of the MACC Act goes on state that:

“Any person who commits an offence under section 18 shall on conviction be liable to—
(a) imprisonment for a term not exceeding twenty years; and
(b) a fine of not less than five times the sum or value of the false or erroneous or defective material particular, where such false or erroneous or defective material particular is capable of being valued, or of a pecuniary nature, or ten thousand ringgit, whichever is the higher.”

So apart from getting fired and being fined for the days you took the MCs, you can face a jail term up to 20 years and pay a fine based on the value of the offence.

Perhaps it’s best to take MCs, ONLY when you’re at your worst state. 🤒

[READ MORE: Can you get fired for taking emergency leave in Malaysia?]