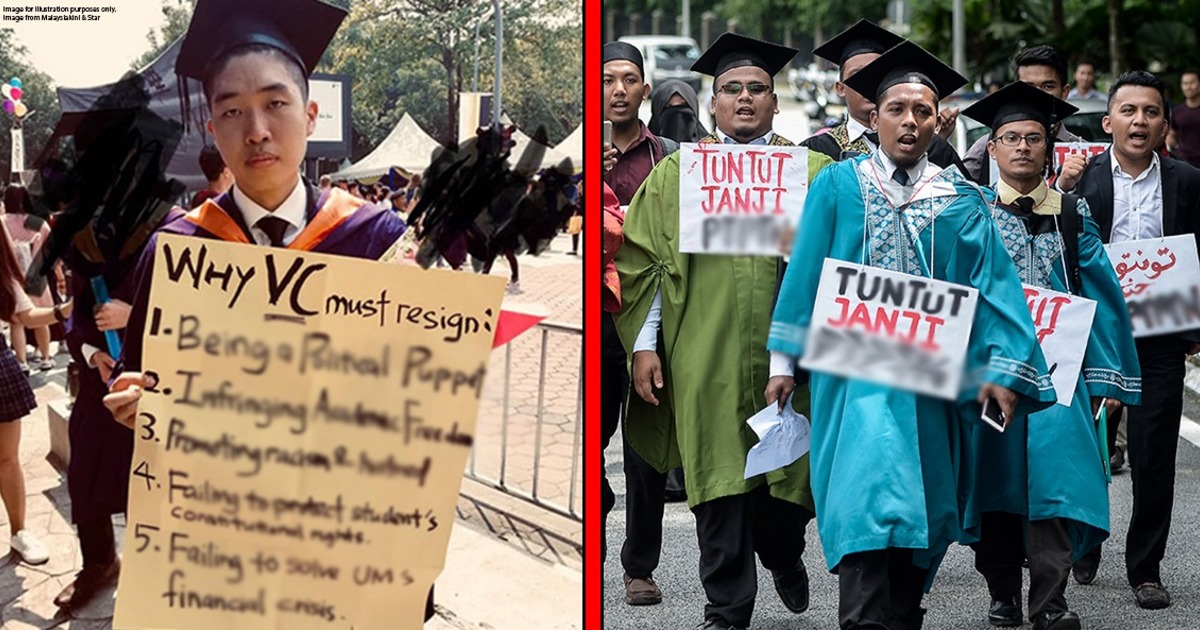 Can Malaysian universities take disciplinary action on students who protest?

Recently, a University Malaya graduate did a solo demonstration demanding the resignation of the university’s vice-chancellor. Wong Yan Ke reportedly carried a placard on stage during the convocation ceremony—bearing the words “Undur VC” (Step down VC) and “Tolak rasis” (Reject the Racist) while receiving his scroll.

UM condemned Wong’s solo protest but did not withhold his degree certificate, despite the accusations. Instead, UM lodged a police report against him for the protest.

Now, this isn’t the first time we’re hearing news on protests, being taken part by uni students. Most of the time, protests are carried out in groups and not by one person...alone.

So with the whole one-man protest being a hot topic among Malaysians—the question is, can the student be punished for protesting during his Convocation?

But first, let’s clarify on how protests work under the law:

Protesting is a constitutional right

As we mentioned earlier, Malaysians are no strangers to protests. In fact, we have seen many over the years. Now, it should be noted that protesting is somewhat a Constitutional right. Article 10 of the Federal Constitution guarantees this:

Basically, a protest is an expression of a person’s disapproval towards something. For instance, if you’re unhappy with your boss, you may choose to express it by protesting outside the office for a day or two.

Most of the time, protests are done in large numbers. There are no requirements on the number of protestors under the law. But if a protest is carried out by a large number of persons in a public place, the law under Peaceful Assembly Act 2012 must be complied.

[READ MORE: How to organise a (legal) rally in Malaysia?]

We spoke to Alex Anton Netto, who clarified how protests work in our previous article. Here’s how he put it:

There have been cases in Malaysia where issues involving Freedom of Expression had to be dealt with rather: delicately. As much as the Federal Constitution states our rights to freedom of expression—there are exceptions to it.

Article 10(2) of the Federal Constitution states the exceptions to freedom of speech, which includes making a defamatory statement or inciting an offence.

For instance, if you’re a threat to national security (which is an offence) or went around spreading lies about someone (Defamation), your right to freedom of speech might be ended.

Now that we know this, can UM actually take legal action against Wong for carrying out a solo protest?

You’ll be surprised to know that...

Now, a university can only revoke or bar students based for some reasons. In this case, UM’s Law Society stated that a student can only be revoked if he fails to clear academic bills or committed dishonesty in his academics. Which can mean, that under UM’s policies Wong’s protest may not fall under gross misconduct.

Students are allowed to exercise their freedom of expression in universities. Under Section 15(4)(b) of the Universities and University Colleges Act 1971 (UUCA):

“(4) Notwithstanding subsection (3), a student of the University shall not be prevented from—
(a) making a statement on an academic matter which relates to a subject on which he is engaged in study or research; or
(b) expressing himself on the subject referred to in paragraph (a) at a seminar, symposium or similar occasion that is not organized or sponsored by any unlawful society...determined by the Board...to be unsuitable to the interests and wellbeing of the students or the University.”

Basically, the Act states that students cannot be prevented from expressing himself on academic related matters at a seminar or any similar occasion. So long as the occasion is organised by a lawful society, the student who is protesting is not breaking the law.

UM can make a police report, but not revoke Wong’s degree

When you look at this solo protest situation from a legal perspective, Wong may not have breached his right to freedom of expression. However, the place and time he picked do protest is said to be unsuitable. Our Youth Minister, Syed Saddiq too stated that a Convocation ceremony is not the right occasion to carry out a protest.

But protests are normally done to express thoughts/opinions to a larger audience. For instance, protesting during a campus holiday would seem impractical, if nobody is around to hear you.

As much as freedom of speech is a constitutional right, there are laws which prevent the disruption of an official ceremony—such as the law against disrupting public peace in the Penal Code.

As for now, the provisions under the UUCA makes it tough for students to be involved in politics. But the government has proposed a Bill to repeal the UUCA, and include student participation in political activities by 2020.