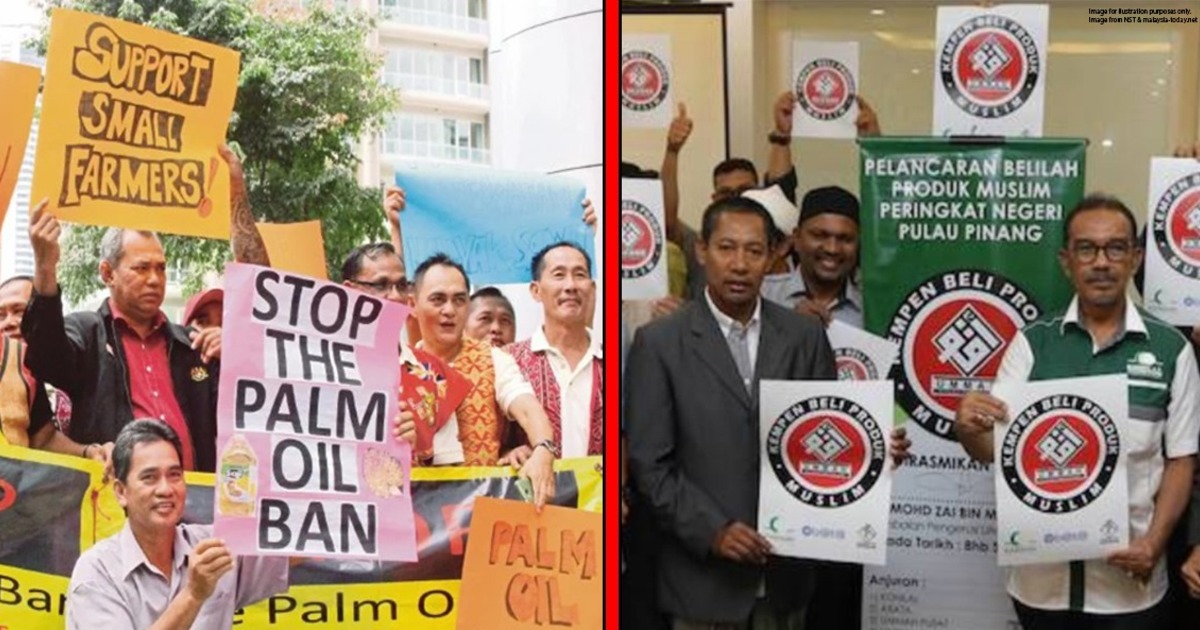 Is it illegal to be part of a boycott in Malaysia?

There have been recent calls for the boycott of non-Muslim products in Malaysia, and to prioritize Muslim-made products. A proposal was made by the Islamic Consumers Association of Malaysia for halal certificates to be issued in the native language of product manufacturers. This was proposed to encourage people to buy Muslim-made products and to easily identify them in the market.

Several bodies such as the Muslim Consumers Association of Malaysia (PPIM) and the Malaysian Chambers of Entrepreneurs also called for the ban on non-Muslim products that used Jawi wordings on their packaging. This has now become a nationwide topic of discussion, as government bodies and our Prime Minister denounced the act of boycotting these products.

But this isn’t the only case of boycott that has happened in Malaysia. In 2018, there was a boycott against European products as the EU wanted to ban palm biodiesel in 2021. Local oil palm holders boycotted against EU’s decision to ban palm oil.

This then led us to questions on boycotts and how they work. For instance, can someone be charged for boycotting certain products in Malaysia? And, what happens a person refuses to buy certain products made by a particular individual/company?

But before we go into the details, let’s briefly look at what a boycott is in the first place.

Boycotts are not the same as protests

We spoke to Alex Anton Netto from Anton & Chen to clarify on how protests and boycotts work:

A protest is the act of putting forth a strong objection whereas a boycott is the act of abstaining to associate with a particular body, organization or company. The act of boycott in itself is an expression of protest. – Alex Netto via email reply to Asklegal.

Basically, a protest is an expression of a person’s disapproval towards something. For instance, if you’re unhappy with the way your company treats its employees, you may choose to express it by protesting outside the office for a day or two.

Boycotts on the other hand, are slightly different. It’s an expression of refusal, or to avoid something that you dislike. Let’s assume you dislike drinking bubble tea (due to the high sugar content). If someone offers you one, you refuse and say you won’t drink it because it’s harmful. This technically means, you’re boycotting bubble tea as you’ve expressed your dislike towards it.

Similarly, refusing to buy certain products from a certain group is a form of boycott too. The question in return will be: Is it illegal to do so?

[READ MORE: 5 points about ICERD that Malaysians are disagreeing over]

Boycotts aren’t illegal unless it poses a threat

For starters, boycotts in itself are not illegal. There are many reasons why people boycott or even protest against something. But, it’s not wrong to boycott against a group of people or a certain product.

In fact, it can be considered to be a Constitutional right to boycott or protest in Malaysia. Article 10 of the Federal Constitution guarantees this as follows:

Basically, we all have the right to voice out and express our disapproval in different ways—including boycotts. However, the legality of boycotts would take a U-turn if it disrupts public safety and order.

[READ MORE: How to organise a (legal) rally in Malaysia?]

Article 10(2) of the Federal Constitution states the exceptions to freedom of speech. Some of it includes making a defamatory statement or inciting an offence. Here’s an example: If you went around saying untrue things about someone (Defamation) or posed a threat to national security (which is an offence), your right to freedom of speech might be brought to an end.

So TL;DR boycotting a certain product in Malaysia, may not be an offence under the Federal Constitution. As much as we are free to exercise our Constitutional rights, the choice is ours to decide based on facts.