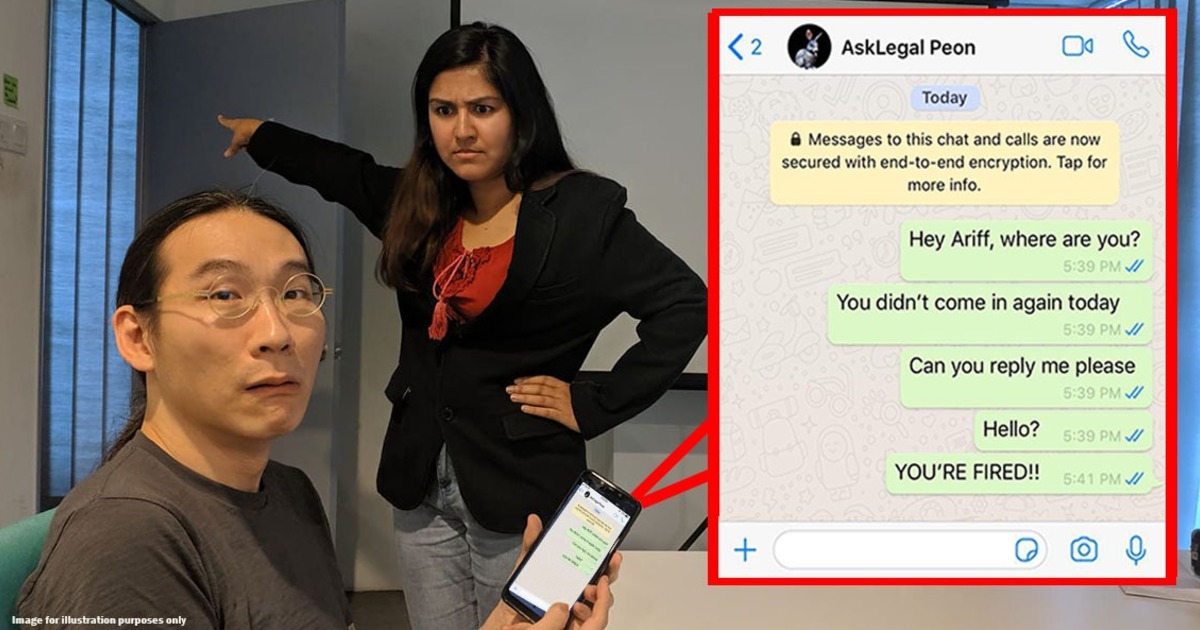 Malaysians CAN now be fired for "blue-ticking" company WhatsApp messages

In the midst of writing this article, our writer isn’t sure if WhatsApp helps companies connect better or...creates more lawsuits. Previously, we wrote about how a Malaysian employee got fired for leaving her company WhatsApp group—click here to read.

Now this time around, another employee was fired for blue-ticking his company’s WhatsApp messages.

With WhatsApp being one of the most common means of communication, most companies create WhatsApp groups among employees—or personally message text them via the app, as an alternative to emails.

The “blue-tick” feature on WhatsApp indicates that a message has already been read by the person on the receiving end.

In the context of employment, it might now seem unfair for an employee to be fired for not replying his boss’ texts. Some of you might even say it’s a personal right to ignore texts or calls.

Before you feel like Malaysian employee rights are draconian, there is more to this story than meets the eye…

Companies cannot fire employees for the fun of it, UNLESS there’s a concrete reason to do so. In Megat Adzwan Shah bin Shamsul Anuar v Malaysia Professional Accountancy Centre, MyPAC (the company) fired Megat (the employee) for more than just blue-ticking his boss’s messages.

In other words, you can simply say there was a chain of events that eventually led to him being fired, when he didn’t reply to his boss’ texts.

Let’s look at some of the reasons that led to the last straw for the employee in this case. For starters, there were complaints about his poor performance and misconduct at work—which pretty much brought his employment at MyPAC to a halt.

Among the reasons he was fired was:

His dismissal from work was not just because he didn’t reply to the messages sent by his boss, but the other factors that added up to it. The company also gave him reasonable time (3 months) to improve his performance at work. This was done to help him become a full-time, confirmed employee in the company.

However, he wasn’t making any progress despite getting an extension on his probation period. 3 months on, his employment contract was ended by the company—which was followed by a lawsuit from the employee’s end.

But the court agreed with the company to fire him

As we mentioned earlier, companies can be in breach if they fire an employee without a proper reason. And since this employee is still under probation, the court had to consider several things to see if the dismissal was fair.

Generally, companies cannot fire an employee on probation, without a valid reason. Let’s take a moment to look at Mak Teck Mun v Ginova Marketing Sdn Bhd, where an employee was fired before his probation period ended. He then subsequently went to sue his company, and won the case based on these grounds set by the court:

"... appointment on probation for six months gives the employer no right [to] terminate the service of an employee before six months had expired except on the ground of misconduct or other sufficient reasons in which case even the services of permanent employee could be terminated. At the end of the six months' period the employer can either confirm him or terminate his service, because his service is found unsatisfactory."

Basically, an employee on probation can be fired if he does not perform his duties properly or is said to have committed a gross misconduct.

In our current blue-ticks case, the Industrial court ruled that the employee had not performed his duties properly, which was enough to justify the dismissal.

But this wasn’t the only reason he got fired. The employee also took loooong lunch breaks and didn’t work 9 hours a day which is a requirement in the course of his employment. To add more oil to the fire, the employee took an unrecorded leave—which made the company doubt his honesty…

The company and court did not find his reasons...reasonable

Basically, the employee failed to go to work on the 21st July 2017. His boss then texted him via WhatsApp, asking him if he was coming to work that day.

The employee did not reply the message, as he claimed to have suffered from acute gastritis—which made him unfit to reply the text message. He further went on to say that he misplaced his phone for a few days, after falling sick.

But here’s where the boss—like an angry girlfriend—decided to show the court screenshots which revealed that the employee blue-ticked his boss’ texts that day.

When this piece of evidence was brought to court, the employee changed the version of his story, saying his nephew was playing with his phone.

Therefore, the court agreed with the company’s decision to fire the employee on the grounds of poor performance and misconduct—which was partially due to him blue-ticking his boss’ texts.

WhatsApp blue-ticks can be a proof of receipt

The read receipt on WhatsApp is an indicator that someone has read the message sent. In fact, WhatsApp messages are also admissible in court as evidence.

The Malaysian high court laid down 2 criterias in a previous case, that must be met in order to use WhatsApp messages in courts:

Basically, you can use WhatsApp as evidence in court so long as it fits the criteria stated above. And although it isn’t a legal obligation to reply your boss’ texts, but it’s perhaps common courtesy to reply important messages.

Or...you could just go to the Settings bar on your WhatsApp, click on Account then Privacy, and turn off your Read Receipts to avoid a lawsuit with your company :P