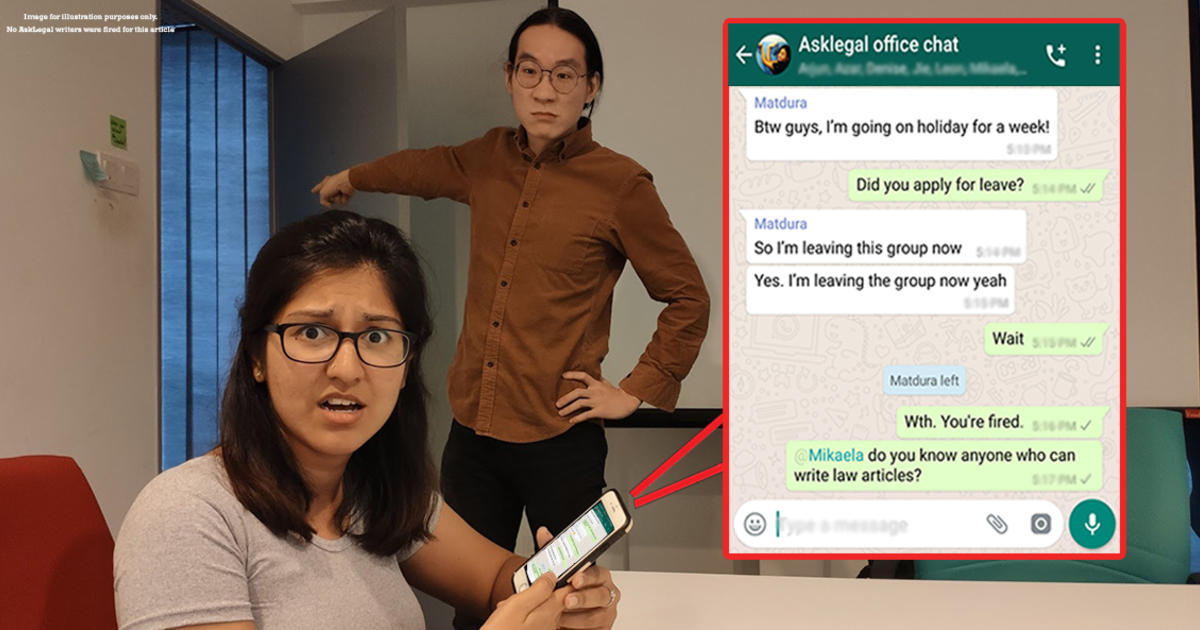 In Malaysia, you CAN get fired for leaving your company's WhatsApp group. Here's why

WhatsApp is probably the most common, effective way to communicate these days. Because, who even SMS-es anymore, right? But sometimes, having too many conversations or WhatsApp groups can affect your quality of life as well.

It’s a common trend now, for companies to create WhatsApp groups among employers and employees. This is done to ease communication between the members of the company – whether in a huge MNC or a small company like...AskLegal. However, one can’t deny that this can sometimes get pretty overwhelming, especially when work messages come in after working hours, or when you’re on a holiday.

So the question here is, can you leave your company WhatsApp group without informing your superiors and colleagues?

A Maxis employee actually did it!

The question above is best answered with a recent Industrial Court case, Thilagavathy A/P Arunasalam v Maxis Mobile Sdn Bhd (Award No. 1050 of 2019, 27 March 2019). Basically, the case came up when the employee was dismissed for leaving two of her company WhatsApp groups because...she wanted to go on a holiday.

Here’s a short background story on what exactly happened. Thila (the ex-employee) was employed by Maxis as a Sales and Services Executive, where she had to send daily sales and service reports via WhatsApp to her branch manager.

She was then added into two WhatsApp groups – one with the Managers and Supervisors, and another with all the other employees. The Head of Branch also informed all the employees that they will have to notify him if they intend to leave any of the company WhatsApp groups.

However, Thila left one of the Whatsapp groups’ without the permission from her superiors. In her defence, she stated that she was not aware of the company policy stating that she had to inform her branch manager. Since it was a first time mistake, she was let off with a warning from the branch manager and things were back to normal again until…

This time however, she left BOTH the company WhatsApp groups and had informed one of the group chats (take note: not her manager) that she was going on holiday and needed a peace of mind away from work. She also failed to send in her Daily Sales and Services reports for several days.

This led to Maxis taking serious action against her. She was asked to give a ‘show cause’ statement (basically a written statement stating why no disciplinary action should be taken against her).

But, Maxis found her reasons in the show cause statement to be rather unreasonable, as she was already been alerted about this and was asked to inform the branch manager before exiting a group chat. Also, she was very much aware that the Daily Sales and Services reports are normally sent via WhatsApp chat groups by the employees.

Due to this, she was dismissed by Maxis for misconduct and uncooperative attitude towards the company. So, Thila was unhappy with the dismissal and claimed that it was unfair for Maxis to do so. She then decided to sue them for it, and brought the matter to the Industrial court where she asked for two things:

[READ MORE: How is a normal Malaysian court different from a tribunal court?]

But then, the court agreed with Maxis

So, in cases of unfair dismissal, the Court has to look into several things before making a judgement. In Thila’s case, Maxis made two allegations that had contributed to the termination of her employment:

The Court now has to identify if the allegations made by Maxis is true and whether there is proof. Also, if she is indeed at fault, the court will have to consider if the punishment for her (ie; the dismissal) is too harsh or not.

So, in the judgement of the award, the court found that Maxis’ allegations were true based on the evidences given. Which means, this might just be the case to set a benchmark for every other company WhatsApp group because...

Basically, it is a breach of the company policy when an employee exits a WhatsApp chat group or any kind of chat space for that matter, when it has been expressly mentioned that they shouldn’t do so.

In this case, the Branch Manager had already given the employee warning when she left the group for the first time. The court concluded that the Claimant had breached the implied duty of mutual respect and had breached her terms of employment with the Company.

The court relied on the case of Kamala Loshanee Amabalavanar v Jaffnese Co-Operative Society (1998) to address all of that:

In other words, her past misconducts such as leaving the WhatsApp group more than once and not being able to give a good reason for it, has given Maxis enough justification to fire her.

But do note, it wasn’t just the gesture of leaving the WhatsApp group alone that had caused her dismissal. She had also willfully breached her employment contract when she failed to send in the Daily Sales and Service Reports in the group chat as well.

“The Company… [is] entitled to give all reasonable and legal directions regarding the manner in which the work of the establishment should be conducted and if their directions are flouted and workers such as the Claimant behave in an insubordinate manner... therefore such obedience or insubordinate behaviour is a serious misconduct…” – as quoted by Donovan and Ho.

So, the court stated that both her conducts, in relation to leaving the WhatsApp groups and not submitting the reports has amounted to a serious misconduct, and it was reasonable for Maxis to fire her. Therefore, if you want to avoid going to court with your Company, maybe it’s best to...

Check with your boss before leaving the company WhatsApp group

Quitting a WhatsApp group may not seem like a very serious offence, especially if it’s in a commercial context. However, there are some companies that use social media or chat groups to discuss important, company related matters among employers/employees.

If your company has clearly stated that the WhatsApp group is the official form of communication in your company, it’s best not to leave the group chat without giving a valid reason for doing so. If your reason for leaving is considered unreasonable by the Company, it can amount to a serious misconduct and you can be fired for it.

So, if you really want to avoid being bugged after working hours or when you’re on a holiday, perhaps you can try and just mute your company chat group for a year instead. ;)