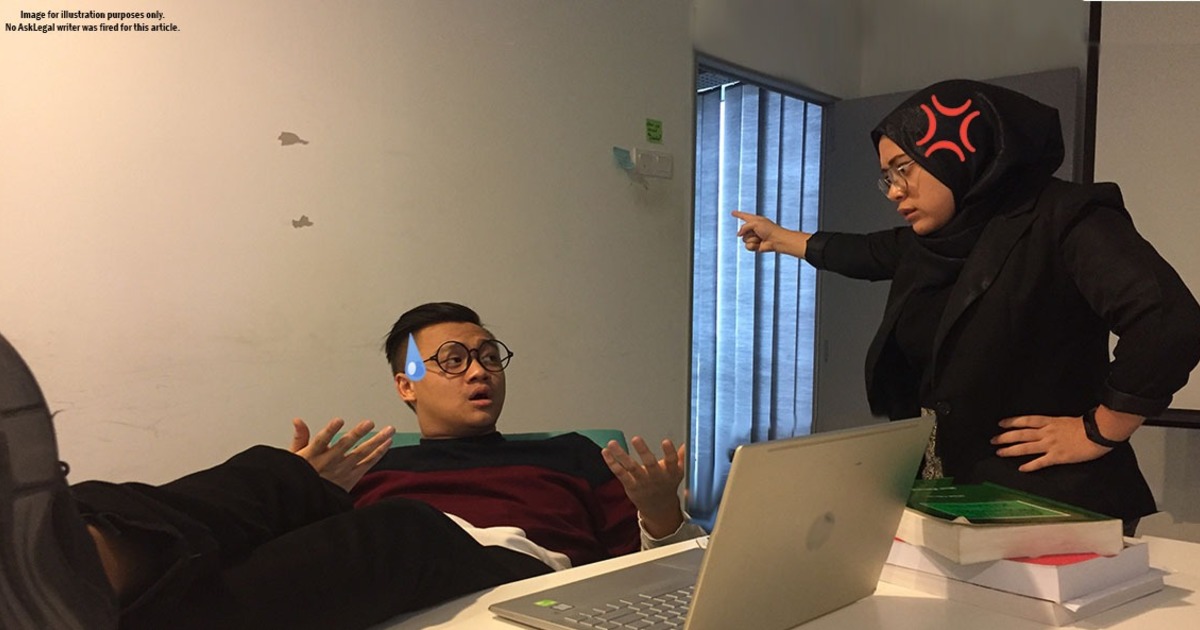 In Malaysia, you CAN get fired for bad performance at work. Here's why

You’ve been working in the same company for almost 5 years now. It’s practically your comfort zone, and you’ve never faced any serious problems at work...until today.

You arrive at work (late as usual) and see a termination of employment letter addressed to you on your desk. You can’t believe it—you’re fired! Even more, you don’t know what you did wrong to begin with. You decide to carry all that anger to your boss’ room and ask him why he decided to fire you for doing nothing!

That’s when you got your answer. You did...nothing.

You’ve failed to reach your targeted KPI for months now, you’re constantly late to work, and you take leave without informing HR. But that’s not all. Your boss goes on to say that there have been numerous complains about you from other employees and the management—which led to the company firing you.

But you’re not going to accept that. You go on to argue that the termination is unfair, especially when you’ve already built a second home in the company. But here’s the thing...

Your company CAN fire you for poor performance

These are just some of the grounds that can be brought by a company to dismiss an employee. But before we go further, here’s something you need to take note of: Poor performance is NOT the same as misconduct. Misconducts can amount to, but is not limited to absence from work, sexual harassment or committing a criminal offence.

[READ MORE: Can Malaysian companies fire you for misbehaving after office hours?]

[READ MORE: What can you do if you have been sexually harassed in Malaysia?]

Perhaps this UK case law can help explain what poor performance is at a workplace. In Littlewoods Organisation Ltd. v L. N. Egenti [1976], the courts stated that:

“...any professional man...would, if he was brought to his notice that his work was not up to standard, and if he did not improve the standard of his work sufficiently, he might be faced with dismissal. That was plain common sense...”

Basically, an employee whose work is not up to standard, and does not do anything to improve his work is subject to dismissal for bad performance in a company. In other words, if you’ve been working for a while now and the quality of your work is going downhill—and you haven’t been doing anything to make it better, you can be fired by your company.

Your company needs to give you a chance to change

But even with poor performances, your boss still can’t dismiss you immediately for it. First, they need to give you time and opportunity to improve. In the case of IE Project Sdn Bhd v Tan Lee Seng [1987], there are several conditions that need to be fulfilled by the company before firing an employee:

“An employer should be very slow to dismiss upon the ground that the employee is found to be unsatisfactory in his performance or incapable of performing...warning him of the possibility...of dismissal on this ground and giving him an opportunity of improving his performance.”

Here’s a summary on the conditions laid down in this case:

Only after they’ve given you a chance AND you failed to improve, then, and only then, can your company fire you for poor performance.

The reason for these extra steps—besides just being compassionate—is to show that if your company fired you, it was done in an objective manner, and was not done unfairly. As it is, the company bears the burden of proof, to show that the dismissal of an employee on the grounds of poor performance was reasonable.

Now, if you feel your company fired you without a good reason...

You can sue your company in the Industrial Court

So, if you feel that you have been fired unfairly, you may bring a case to the Industrial Court. Section 30(5) of the Industrial Relations Act 1967 provides: