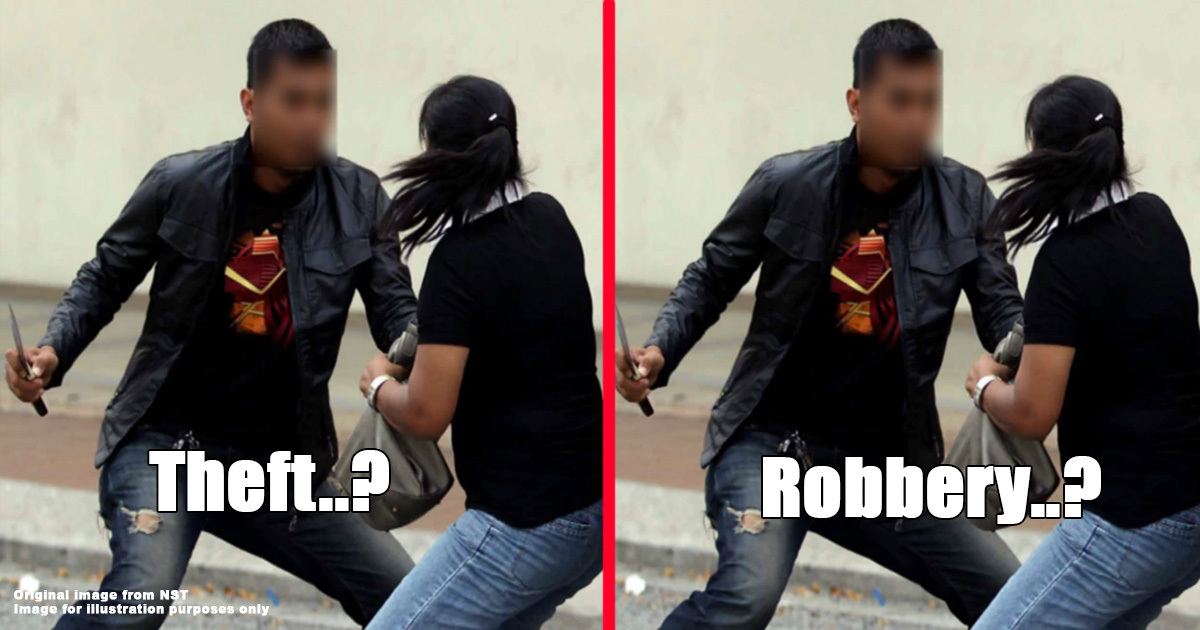 What’s the difference between theft and robbery in Malaysia?

If someone broke into your house in the middle of the night and stole your TV, you might tell people that “A THIEF entered my house last night” or “A ROBBER entered my house last night” - both sound correct. The most obvious thing both thieves and robbers have in common is that they steal things from others and, for the most part we use the terms as if they mean the same thing. However, if you say “snatch robbers” or “bank thieves”, it sounds kinda weird.

So this leads us to the question of whether there’s any difference between a robber and a thief - in the legal sense at least. The words “thief” and “robber” have similar meanings, but legally speaking, the difference between them involves proving a few “ingredients” to the crime, and has to consider some extra factors like the person’s intention, and whether there was “extortion” (which means something pretty specific in law).

We’ll get to these elements one by one below, but first, let’s look at the dictionary for the baseline difference between a “thief” and a “robber”. A simple Google search tells us their dictionary definitions:

Thief - a person who steals another person's property, especially by stealth and without using force or threat of violence

In short, a thief tries to remain unseen and goes quietly while a robber might come at you armed with weapons as a threat. But while the dictionary keeps the difference to just the threat of force, the law has to look at a few more things.

[READ MORE - Does "burglar" mean something else as well?]

You need to prove they had bad intentions

Imagine picking a lost wallet off the floor, intending to look for the owner. At the worst timing possible, the owner comes running towards you from afar, screaming “GIVE MY WALLET BACK YOU THIEF”.

While you can easily clear up the misunderstanding with the owner in this scenario, the law can’t afford to make those kinds of mistakes - because well, prison isn’t a fun place to be in, so they need to be REALLY sure that the person they’re imprisoning is actually guilty. This is why the law has to prove that a person had the intention to commit a crime before they can be proven guilty.

To this effect, the definition for “theft” in our Penal Code is as follows in Section 378. The first thing you might notice is that unlike the dictionary definition, the legal definition doesn’t mention anything about thieves trying to be stealthy, or not using violence:

“Whoever, intending to take dishonestly any movable property out of the possession of any person without that person’s consent, moves that property in order to such taking, is said to commit theft.” - emphasis added.

According to the definitions in the Penal Code, if someone does something “dishonestly”, they’re doing it with the intention of causing “wrongful gain” or “wrongful loss” to a person. Basically, it means doing something illegal that takes property away from its rightful owner.

The element of consent is pretty straightforward - if you didn’t let me take your umbrella, but I took it, then I stole your umbrella. But there’s a pretty interesting illustration in the Penal Code about when you have a friend’s implied consent to use their things: if you took a book from a friend’s bookshelf without their permission, you won’t have committed theft if you have an understanding that “sure, borrow whatever you like, but be sure to return it”.

Now that we’ve gone through a way-too-long explanation of theft, you should find it easier to understand what robbery is because...

Robbery is just a type of theft

“In all robbery there is either theft or extortion.” - emphasis added.

We already know what theft is, so what’s the legal definition of “extortion”? We’ve got to look at Section 383 of the Penal Code for that:

“Whoever intentionally puts any person in fear of any injury to that person or to any other, and thereby dishonestly induces the person so put in fear to deliver to any person any property or valuable security, or anything signed or sealed which may be converted into a valuable security, commits “extortion”.”

In simple English, that translates to threatening to injure a person to make someone give you something valuable. So, what makes theft or extortion turn into a robbery?

Penal Code - Section 390(3) in part
“Extortion is “robbery”, if the offender, at the time of committing the extortion, is in the presence of the person put in fear and commits the extortion by putting that person in fear…”

In short, extortion is a separate but pretty serious crime as well, but you would call an extortion that’s happening in person a “robbery” instead.

The punishment is also higher for robbery

To summarize the above:

Theft = Dishonesty + Taking something that you’re not allowed to

Extortion = Threat + Making someone give you something

Robbery = Theft + Violence OR Extortion + Threatening them in person

In a sense, thieves get a lighter punishment because while they’re trying to take away what’s not theirs, they didn’t decide to threaten people and put their lives in danger. Theft is punishable under Section 379 of the Penal Code with up to 7 years of prison and/or a fine. Repeat offences get punished with another round of imprisonment, as well a fine or whipping.

Extortion gets it a little more serious under Section 384 at up to 10 years, or a fine, or whipping, or any two of those punishments. And robbery gets a punishment of up to 14 years in prison, which can include a fine or whipping as well.

Now that you know what laws apply to thieves and robbers, you might have also wondered what’s the difference between “murder” and “manslaughter” - which we’ve covered in another article here.

[READ MORE - What’s the difference between murder and manslaughter in Malaysia?]