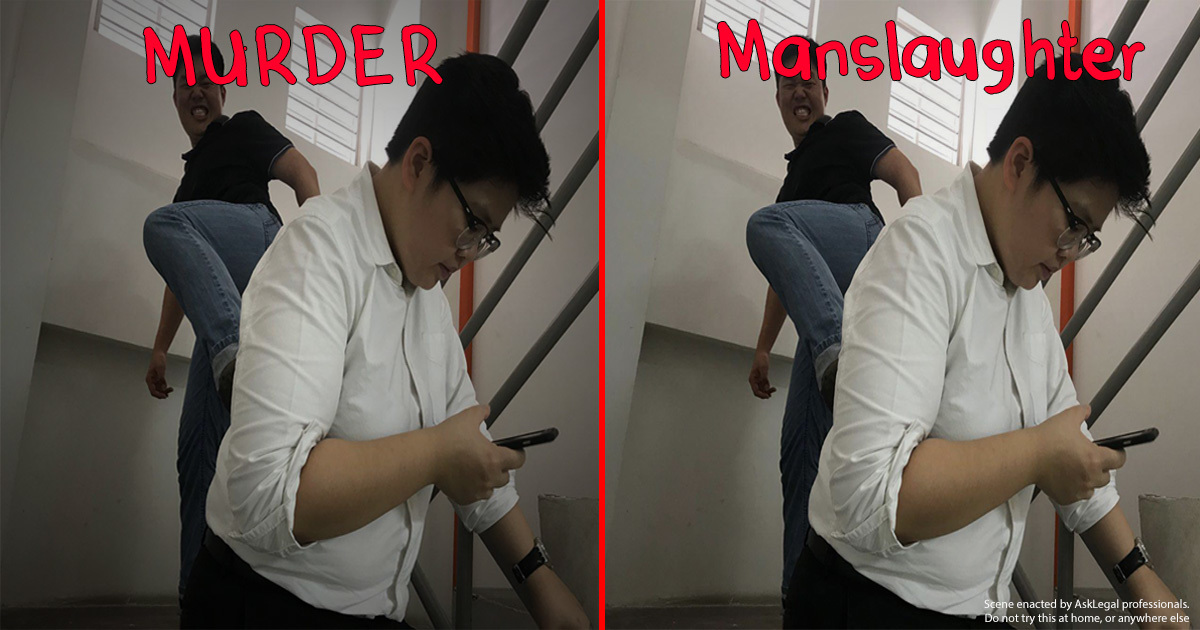 What’s the difference between murder and manslaughter in Malaysia?

For most people, our only encounter with murder is through a TV show, or a video game. Those TV series usually make mention of a few kinds of fancy terms to describe the crime of killing of a person: first-degree murder, second-degree murder, homicide, manslaughter… But how are these terms different from each other? Does it mean that some murderers have only one Bachelor’s degree, and some others took a double degree???

That was a joke (because you can’t have manslaughter without the laughter!), but some of you will have realized from crime dramas that “manslaughter” seems to mean that the suspect was at least a little bit innocent - but you couldn’t figure out what exactly it was. So what’s the difference between an outright murder, and manslaughter?

Each country’s laws on murder can be very different from each other, but here’s the Malaysian legal position on killing a fellow human. (This isn’t about how to plan a murder and get away with manslaughter okay!)

Which crime you committed depends on your intentions

In the Malaysian Penal Code, “murder” is defined in Section 300 (paraphrased to make it easier to understand) as:

The important element that makes murder such a serious crime is that the person acted out with the intention to take away someone else’s life, or seriously harm them so much that their life is put in danger. The punishment for murder in Malaysia is a mandatory death sentence under Section 302.

So what makes manslaughter a “less serious” crime? If someone was killed, shouldn’t it be considered murder? But the reason why people who are convicted of manslaughter are given lighter punishments is that their intention was not as malicious as someone who committed murder…

Why does manslaughter have a lighter punishment?

Manslaughter is defined differently across the world, and its name is not actually used in the Malaysian legal system. We know it as “culpable homicide not amounting to murder” here, or CHNATM for short.

Murder is also a category of “culpable homicide” under Section 299. But the key difference between murder and CHNATM is that CHNATM only involves an intention to cause an injury, but not to kill.

For example, you might intend to trip your friend in a stairwell to hurt him as a joke. The stairs are pretty steep and dangerous, so he might get seriously injured or even die from the fall. If your friend really dies, you have just committed manslaughter.

But if you tripped him in the stairwell to make him tumble down a long way, knowing that he would get seriously injured or that he might die, you have just committed murder (or attempted murder).

The punishment for culpable homicide is in Section 304, which states that you can be jailed for up to 30 years with a possible fine if you intended to cause death, or cause an injury that would likely lead to death. The punishment is different if you only knew that your actions would likely kill someone, but you didn’t intend their death - you’ll get up to 10 years and/or a fine in this case.

What if they had a medical condition, but I didn’t know?

The takeaway for practical jokers may be to be careful not to take things too far with their friends. Because “I thought tripping him down the stairs would be funny, I didn’t mean to kill him!” is not going to cut it as an excuse if someone really dies.

One other scenario that is considered culpable homicide is where you hit someone who is weakened because of a medical condition, and they died from your hit although it would not kill a normal person. This is still considered CHNATM because you had the intention to hit and injure them, even if you didn’t know about their medical condition. You would be innocent of course if the person spontaneously died to a pat on the back since that scenario is quite bizarre, but more importantly: you didn’t intend to harm them at all.

TL;DR - Manslaughter is called “culpable homicide not amounting to murder” (CHNATM) in Malaysia. CHNATM happens instead of murder when you didn’t intend to kill, only to hurt. It’s still a serious crime that you shouldn’t be planning, it’s just not as serious as murder.

There are a few more exceptions in the Penal Code which can change what would have been a murder into a CHNATM. We’re only going to mention the most relevant ones because they can be quite complex to explain without confusing everyone.

1) You were provoked and you lost your self-control

Culpable homicide is not murder if you were provoked by a grave and sudden provocation (like by a surprise scare in a dark house), and you kill the provoker because you lost your self control. This exception is not meant to protect wrongdoers, so this law only applies provided that:

Another notable point is that swearing and name-calling is generally not recognized as a grave and sudden provocation in law, so don’t take people with “colourful” language too seriously.

[READ MORE - When can the PDRM fire their weapons?]

2) You were exercising self-defence but accidentally went overboard

This exception might apply if you were exercising your right to self-defence of person or property, but you exceeded your right and killed your attacker. If you didn’t intend to kill or do more harm than necessary, then you won’t be charged for murder, although you might still have to answer for culpable homicide.

In the case of Wong Teck Choy, the judge decided on this exception applying only when there is a need to kill the other person. So do not continue beating your attacker up if he has surrendered and is not threatening you, because doing so might earn you the death penalty.

3) You killed someone in a sudden fight, in the heat of the moment

In this scenario, if you killed someone in the heat of a sudden fight by accident, it might only be a culpable homicide instead of a murder. The Penal Code says that it doesn’t matter who started the fight, but as long as you didn’t plan to take their life, your punishment might be lighter than the death sentence (though you may still go to prison for a while).

This is subject to you not taking any unfair advantage or acted in a cruel or unusual manner. For example, if you were fighting with your bare fists it would be fair. But if you grabbed a parang and started slashing the other guy then that is probably an unfair advantage, not to mention cruel.

But what if it was an accident?

In cases of self-defence, causing the death of your attacker could be taken as a crime if you exceeded your legal right to defend yourself under Section 99 of the Penal Code - but as stated above - it will not be considered murder. There are also certain situations where killing your attacker is justified, which are tabled under Section 100 and include situations where your life is in grave danger, where there’s a threat of rape, and also in kidnappings.

[READ MORE - Why do some Malaysians get arrested for killing robbers in self-defence?]

In the cases where someone dies in a car accident, the offender may still be arrested to assist the investigations first, but may later be released when no fault is found. This would happen in cases where there is no intention to cause harm, and the offender took enough care to prevent the accident. However, if he was being negligent, like if a driver was speeding and swerving between lanes, then it could be recognized as a separate crime under Section 304A of the Penal Code - causing death by negligence, which carries a penalty of up to 2 years of jail, and/or a fine.