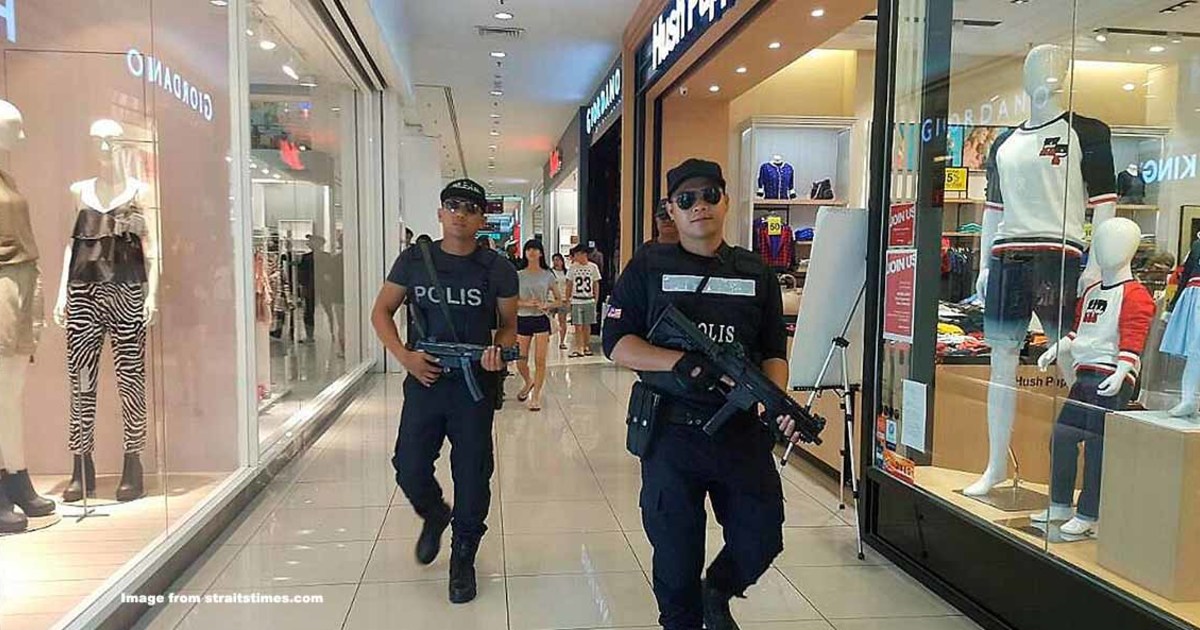 Are there laws that tell police when to fire their guns in Malaysia?

Imagine this scenario. You are out at the mamak late one night, catching some drinks with your mates. Suddenly, you hear the whine of sirens and the screech of tires coming from a distance. Alarmed, you look around and see a car speeding down the road with two police vehicles in hot pursuit. The policemen are using their loud hailers in an attempt to get the car to stop but it continues speeding on. Then, you hear this sound, “truuupppp”, the unmistakable sound of an automatic gun being discharged.

You see a policeman hanging out of the window of his police vehicle, firing at the car that refused to stop. Your heart thuds because all of this seems like a re-enaction of your favourite movie. The car then skids and crashes into a wall, the policemen hurries over. You, as a curious onlooker, join in as well. You expect to see a hardened criminal in the front seat but you see...a teenage boy?

If the facts of the scenario that we describe above sounds familiar to you, it is because the scenario above mimics that of 15 year old boy, Aminulrasyid Amzah, who was shot dead after a night out with his friends at the mamak. 30 shots were fired at his car. 29 hit his car, 1 hit Aminulrasyid. Aminulrasyid’s death attracted the cries of many Malaysians, expressing shock and anger, and above all, police brutality. Our friends at Cilisos did a full write up on Aminulrasyid and you can read about it here.

Aside from Aminulrasyid’s case, the Royal Malaysian Police have also been hauled to court over several questionable discharges of their firearms. One of them was with Norizan Salleh, a woman who was shot five times in the chest and who was awarded RM320,000 in damages after the court found that the police failed to demonstrate that shooting was necessary.

Most recently, policemen fired several shots at a car which refused to stop at a roadblock in TTDI. The car tried to flee by mounting a divider. The driver was shot once in the back before getting arrested. These shootings leave us with a very important question of when can policemen fire their guns?

Policemen can fire their guns under a whole bunch of scenarios

First things first, police are empowered to carry guns by virtue of section 85 of the Police Act 1967 which simply states that:

“A police officer may in the performance of his duties carry arms.”

However, you before you go on an angry rant about the ineptitude of Malaysian laws, section 85 is not the only section to look at. Section 97 of the same Act tells us that the Inspector General of Police (“IGP”) may issue administrative orders which are called “Standing Orders” for the general control, direction and information of the police force. It is this section that gave gave birth to what is known as the “Inspector General Standing Order (“IGSO”).

The IGSO is not available to the general public but we managed to find a copy online that was uploaded for educational purposes. However, we would advise our readers that we are unable to verify the veracity of this link and it has to be taken with a pinch of salt.

Now that our disclaimer is out of the way, we would like to draw your attention to IGSO D222 (which is on slide 18 if you are reading the link provided above). IGSO D222 is the part that speaks about when police officers are allowed to discharge their weapons and why. The different scenarios will be dealt with in turn below.

Use of guns during an illegal gathering/riot

D222 allows police officers to discharge their guns when they are attempting to disperse an illegal gathering or riot but this must be done in line with the rules in the Public Order book.

Use of guns when there are no alternatives

There are several scenarios that allow for the use of guns in extreme scenarios. They are:

The police are allowed to discharge their weapons when there is risk of death or serious injury but the use of guns is only for preventive purposes and is not meant to cause more harm than what is necessary (this is an issue for the courts to decide). In addition to this proviso, guns are only allowed when there is fear of death/serious injury in the following situations:

A policeman is allowed to use his gun if he is trying to arrest or prevent a suspect from running away. There are two points to note in this subsection:

Aside from the different scenarios provided above, there are also extra rules that are found in D222 for when officers open fire. The first rule is that policeman are not allowed to fire “warning shots”. You know how in the movies, the heroic cop fires his weapon in the air and then the bad guys just end up a blubbering mess, crying for their mothers? Yeah, that is not allowed in Malaysia.

Beyond that, the police are allowed to fire their weapons if you fail to stop and raise your hands after they have told you to do so. However, if they do choose to fire their guns, it must be because there was no other way for them to protect themselves or it was meant to control the situation. If the police choose to shoot at a car, they must be mindful of the general public and only aim at the tyres of the car.

[READ MORE: Can Malaysian police legally search your car at a roadblock?]

Above all else, the action of the policeman discharging his weapon must be reasonable. It cannot be by accident or for frivolous reasons. While policeman have the right to defend themselves, it is not a valid excuse to kill a “suspect” because the policeman was injured in the line of duty. Essentially, “shoot-to-kill” situations only exist in the rarest of situations. However, if a policeman does discharge his weapon and it doesn’t seem to be in compliance with the rules in D222, there is another law that the courts can look at.

There are scenarios where killing someone is unavoidable

In essence, sections 100 and 103 mirror the rules in D222. Section 100 provides for when a policeman (or you) is allowed to defend himself to the extent of causing death to another person. Like the rules in D222, it involves scenarios such as preventing an assault with the intention of committing rape or kidnapping.

“The right of private defence of the body extends...to the voluntary causing of death or of any other harm to the assailant, if the offence which occasions the exercise of the right is of any of the following descriptions...”

Section 103, on the other hand, comes into play when a policeman (or you) is defending private property and it results in a death. The situations involve robberies, housebreakings and trespass resulting in death/serious injury.

“The right of private defence of property extends...to the voluntary causing of death or of any other harm to the wrongdoer, if the offence, the committing of which, or the attempting to commit which, occasions the exercise of the right, is an offence of any of the following descriptions...”

Now, that we know that the police are allowed to fire their guns in a multitude of scenarios, what does this mean?

Basically, when the police tells you to “Berhenti”, DON’T RUN

Usually if the police pulls you over in a roadblock or while you are walking down the street, they would have reasonable suspicion to do so. It may be because you fit the profile a suspect that they are looking for or maybe you were driving erratically. Regardless of what it is, the best thing to do in such a situation is to stay calm and heed the police’s instructions.

For further information on what rights you have when the police stops you, head over to the Bar Council’s website here and download the Red Book (the book that tells you what your rights are when the police are involved). Most of all, don’t run out of fear because the police are empowered to use their guns if the situation warrants it.