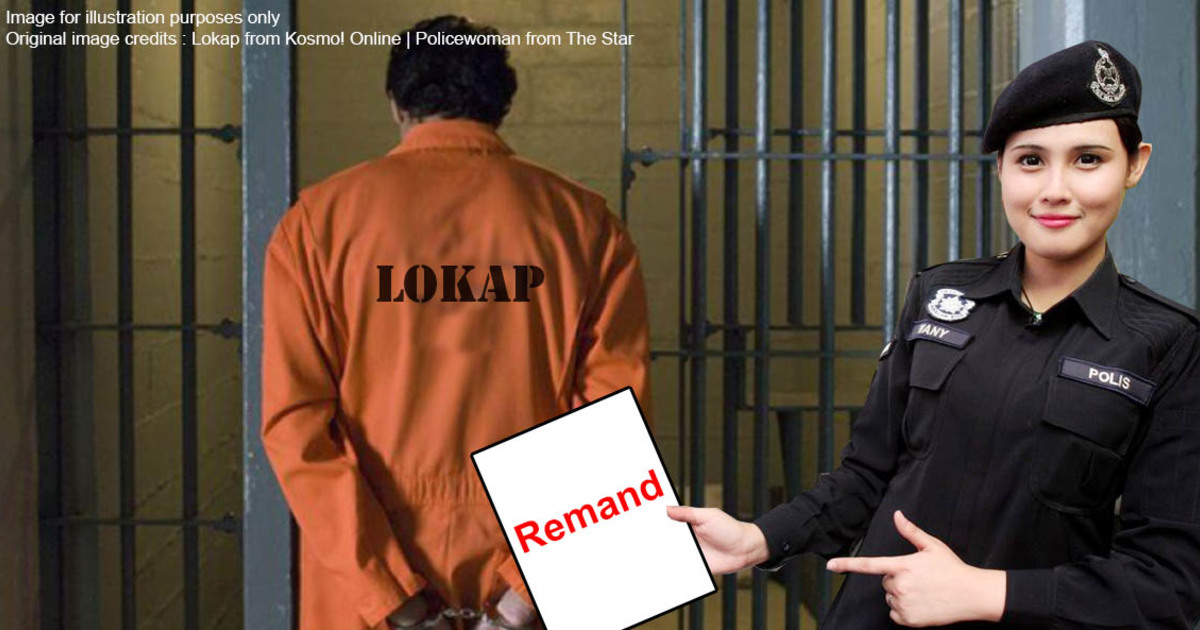 "Suspect from Ipoh held under remand" - but what does 'remand' actually mean?

We recently got a question from one of our readers on whether the police are allowed to detain you if you haven’t been formally charged with a crime yet.

So here’s an example of how this might play out: You’re out clubbing with friends one night, just having some fun and knocking back some drinks – nothing illegal at all. The lights suddenly come on and, it’s a police raid! As the police make their rounds checking IDs, an officer notices a couple of pills near your feet and places you under arrest for further investigation. You’re placed in the lockup but you keep calm because you’ve read enough Asklegal to know that you’ll be out within 24 hours. Unfortunately, at the 20th hour, the officer says they are bringing you to court to detain you for another week.

So this is a pretty simplified example, but it leads nicely into what’s legally known as remand. Before we get too in-depth though, let’s cover some of the basics first.

When the popo asks you questions, it may not be an arrest

The first thing to note is that not every interaction with the police will amount to an arrest. Section 15 of the Criminal Procedure Code (“CPC”) provides the situations where an arrest can happen:

“In making an arrest the police officer or other person making the same shall actually touch or confine the body of the person to be arrested unless there is a submission to the custody by word or action.”

Basically, an arrest can only happen in 3 scenarios:

[READ MORE: What are your rights if you’ve been arrested by the PDRM?]

[READ MORE: How do you know if you’re being arrested by the PDRM?]

Once you have been arrested, you can only be detained up to 24 hours for the purposes of allowing the PDRM to complete their investigation. If at the end of that 24 hours, the police feel like you are not a suspect, they must release you.

However, there are situations where you can be detained for more than 24 hours and this is where the court grants a remand order.

A remand order can go up to 14 days

A remand order can be granted if the police feel like their investigation cannot be completed within 24 hours. In such a situation, the police must bring you before the Magistrate before the 24 hours is up and petition to the court for a remand order. So in essence, a remand order can be granted by the Magistrate for the purposes of allowing the PDRM to continue with their investigation. Aside from that, remand orders can only be made to detain suspects to a case and not a witness as provided in the case of PDRM v Audrey Keong.

The section that allows remand to be granted is section 117(1) which reads:

“Whenever any person is arrested and detained in custody and it appears that the investigation cannot be completed within the period of twenty-four hours fixed by section 28 and there are grounds for believing that the accusation or information is well founded the police officer making the investigation shall immediately transmit to a Magistrate a copy of the entries in the diary hereinafter prescribed relating to the case and shall at the same time produce the accused before the Magistrate.”

The period for remand depends on the the discretion of the Magistrate but there are basic guidelines to follow.

If the offence is one that is punishable with less than 14 years imprisonment, then the Magistrate can grant remand twice; the first remand order cannot exceed 4 days of detention while the second cannot exceed 3 days. This means that the total remand period for such an offence is 7 days.

This investigation diary and the production of it will help the courts determine whether or not it is necessary to grant a remand order or not. But if you’re thinking that it’s fine because you can just get your family members or friends to post bail, you might be in for some bad news due to one little phrase:

“Bail is subject to remand”

As a quick recap, bail is “permission” given by the courts to allow you to go home while waiting for the trial to start. When a bail order is made, you will have to pay a certain amount of money to the courts and if you fail to show up, the money can be forfeited. Whether or not bail is granted depends on the type of offence you are charged with and the discretion of the courts.

However, even if the type of offence you are arrested for is a bailable offence (which means you get bail as of right), this bail is subject to remand. It basically means that while you will get bail if you are charged with committing the offence, the right to bail only kicks in after the remand period. The case of Duis Akim succinctly explains that a suspect cannot be bailed out of jail during the remand period.

In other words, even if you’ve successfully posted bail, you’ll still have to wait until the remand period ends before you can go home

Before you rage about how unfair this is, remember that a remand period is meant to facilitate police investigation. If you were released on bail during the time the police is supposed to use to investigate you, then it might make investigations a lot harder to complete. Not to mention the fact that if you did commit the crime, you might just take that judge-given opportunity to destroy anything that can be used to implicate you in the crime… which would then defeat the purpose of remand orders.

So there you have it folks. If you ever feel like you have been wrongfully detained, you can always choose to sue the government in a civil suit but do note that even if the police used unlawful methods to arrest you or if your detainment was unlawful, this does not affect the criminal trial that you may have to go through. The only recourse you have is to sue the government (or make voodoo dolls).

(Or, more realistically, hire a lawyer)