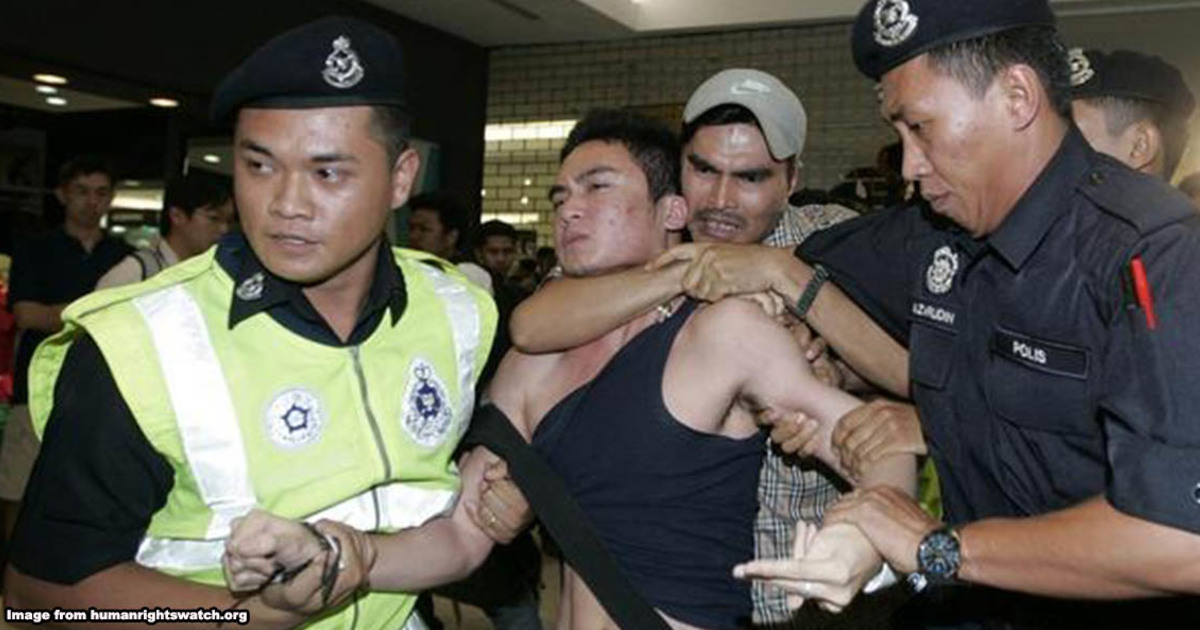 How do I know if I am getting arrested by the PDRM?

You are walking down Chinatown, enjoying the lights and the multitude of characters that Chinatown has to offer. As you are looking at a knockoff Rolex, admiring how at first glance, the Rolex appears real, you hear shouts coming from the front. Alarmed, you turn around and wonder if you have been caught smack dab in the middle of a gang fight but then the shouts become clearer and you manage to make out, “POLIS POLIS”.

Then you catch sight of our men in blue walking down the street, stopping at random stores and conducting checks and raids. You turn around and decide to walk faster because you really don’t want to be caught in the middle of all that. Perhaps you turning tail was suspicious because suddenly you hear a loud voice going, “YOU IN THE BLUE SHIRT. STOP”. You do a quick check and yep, you are in blue.

You contemplate running away because you really don’t want to get caught up in all the drama when you were just taking a nice walk but then again, you have heard stories of people who get punished for evading arrest. But the question is…

How do I even know if I am getting arrested?

We know that every Malaysian grew up with stock Hollywood movies where the cops tackle the bad guys, read them their Miranda rights and then haul them up while saying some pretty cool line.

However, in real life, arrests are usually not that dramatic. In fact, arrests in Malaysia are governed by section 15(1) of the Criminal Procedure Code:

“In making an arrest the police officer or other person making the same shall actually touch or confine the body of the person to be arrested unless there is a submission to the custody by word or action.”

Section 15 tells us that arrests can happen through one of three ways:

Examples of how arrests can happen through the three scenarios are found below:

You have just robbed someone of their handbag. As you are running away, a policeman reaches out and grabs your arm. There has been an arrest.

You just robbed someone of their handbag. As you are running away, a policeman reaches out and wraps his arms around your waist, confining your body and effectively stopping you from running. There has been an arrest.

You just robbed someone of their handbag. As you are running away, a policeman shouts, “BERHENTI” and you stop, with your hands up. There has been an arrest.

You just robbed someone of their handbag. As you are running away, a policeman steps out in front of you and holds up his arm, making a stop sign. You stop and say, “I submit”. There has been an arrest.

In addition to this, there is also something known as a common law arrest that was established in the case of Shaaban v Chong Fook Kam. In this case, the judge said that an arrest can happen when:

However, the common law arrest differs from what is found in section 15 as the judge did not make reference to section 15 when deciding Shaaban’s case. As you can see, the only similarity between the arrests under section 15 and arrests under Shaaban is through the use of force to restrain the suspect.

Now that you know when you are getting arrested, the next question is…

Can the PDRM use force when arresting me?

“(2) If such person forcibly resists the endeavour to arrest him or attempts to evade the arrest such officer or other person may use all means necessary to effect the arrest.

(3) Nothing in this section gives a right to cause the death of a person who is not accused of an offence punishable with death or with imprisonment for life.”

This means that the police are allowed to use force when arresting you if you use force to resist the arrest or tries to avoid the arrest. However, the amount of force that the police officer uses cannot cause your death if you are not accused with any offence that is punishable with death/life imprisonment (such as murder).

For example, in the case of Mahmood v Government of Malaysia & Another, a police officer was patrolling in the middle of the night and he heard a woman’s screams for help. Then, he saw a man running away. When the man refused to stop when told to do, the police officer shot and wounded him. It was held that the police officer was allowed to fire his gun because section 15(2) allowed him to use all force necessary to carry out an arrest.

[READ MORE: When are Malaysian police allowed to fire their guns?]

[READ MORE: What is the difference between a summons and a warrant in Malaysia?]

What if I was wrongfully arrested?

If the arrest did not comply with any of the methods laid down in section 15(1), then you can sue for wrongful arrest and get damages (Tan Eng Hoe v Attorney-General). However, an important point to note is that suing for wrongful arrest is a civil action and it does not affect the criminal proceedings for your crime (if you are charged with one). This means that even if you were wrongfully arrested (not following the procedures) for theft, the authorities can still charge and convict you of theft if you did commit the crime.

Aside from getting to sue them, you also get to exercise the right to private defence when they try to arrest you (if it was an unlawful arrest). In a very simplistic manner, this means that you can fight back and defend yourself. In the case of Public Prosecutor v Kok Khee, the court said that it was justifiable for the suspect to struggle because he was resisting the use of illegal force against him.

So, there you have it folks. It doesn’t mean that the police in Malaysia are above the law. They do have procedures and laws to adhere to and as the Kok Khee case showed us, if the arrest was unlawful, it is illegal for the police to use force against you.

At the end of the day, it is always important to know your rights and know that you are still protected by the law even if you have committed a crime.

For further information, you can always download the Malaysian Red Book here, which lists down the rights you have when dealing with policemen.