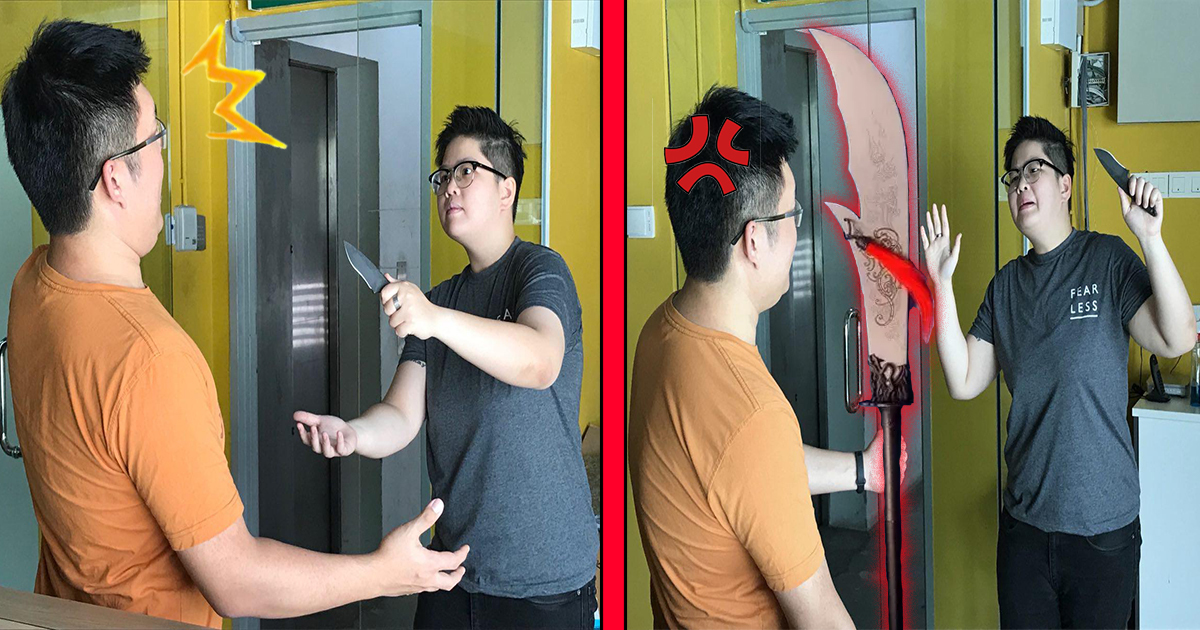 Malaysian law sometimes allows you to kill your attackers in self-defence - but when?

You may have heard of incidents where people have gotten their homes broken into, and they killed the intruder, but are arrested, and maybe even sentenced to jail for murder. Such was the case where a lot of netizens came to the defence of a Zulkifli Ismail, cafeteria owner who had supposedly defended his property from two robbers, killing one of them in the process. Why is that, huh?

But the truth got stranger after investigations and fact finding - it turns out the two “robbers” in Zulkifli Ismail’s case were just scrap metal hunters who were unarmed, and Zulkifli actually snuck up behind them with a machete, slashed one, and stabbed the other, before chasing them over 70 metres. Witnesses also testified that they saw the deceased scrap hunter raise his hands and plead for Zulkifli to stop hurting him, but was ignored. It didn’t help Zulkifli’s case either that he lied about injuring the two scrap hunters by accident, because the investigations showed the victims’ stab wounds were inflicted on purpose.

While your first impression might have been that Malaysia has weird laws which side the criminals, there’s a pretty good reason why our laws limit the right to self-defence. Okay, we didn’t use a good example because Zulkifli took things too far, and the scrap metal hunters were not exactly robbing him (even though they might have trespassed onto private property) - but how should we Malaysians conduct ourselves if we have the misfortune to have our homes broken into? What if the only way to fend off an attacker is to kill him?

We often joke about inviting the robbers to tea and letting them have anything they want, but in reality, our laws actually provide situations where you’re allowed to go as far as kill the person threatening you - if necessary.

We have a right to self-defence, but it’s not absolute

Our right to self-defence comes from Section 96 of the Penal Code, which states that anything you do in self-defence will not be considered a crime - which is where our belief that we can legally harm a robber comes from. But we can’t exactly go around abusing the rule by calling everything we do “self-defence”. Robbing a bank and saying you’re “defending yourself from poverty” will probably not stand as a good excuse.

We’ve covered the details of how our self-defence laws work in a previous article, which we’ve linked below. We recommend reading it before you continue with this article to get a full picture. If you’re looking for a more practical guide, check out our piece on how you can protect yourself from burglars in Malaysia.

[READ MORE - Why do some Malaysians get arrested for killing robbers in self defense?]

[READ MORE - How to protect your home from burglars in Malaysia]

Your right to self-defence goes as far as causing the death of your attacker if one of the following scenarios happen:

1. You’re defending against an assault that will probably kill you

The rule here is that if an attack that puts you in reasonable fear that getting hit by it would cause death. The complex definition there is important because you must have good reason to think the attack was going to be a deathblow.

So for example, if you were paranoid and thought someone who tapped you on the shoulder was a murderer - you don’t have the right to self-defence here; but if a robber came at you with a fake knife, you can still defend yourself if you mistook the knife as a real one.

2. You’re defending against an assault that will probably cause “grievous hurt”

“Grievous hurt” has a specific meaning under Section 320 of the Penal Code. Basically, it covers injuries which could affect you permanently, or could take a long time to heal.

3. The attacker has the intention of committing rape, is acting upon “unnatural lust” (meaning things like sodomy or oral sex), or intends to kidnap or abduct someone

These are pretty straightforward, but these crimes may carry more specific criteria under the Penal Code which you can refer to here. For example, the definition of “rape” in Malaysia is worded so that a woman cannot “rape”, and a man cannot be “raped”.

4. Someone is going to be trapped in a way where they can’t contact the police

This one covers the nightmare scenario of being brought to an unknown location and locked up, tied up so you can’t escape or call the authorities.

Keep in mind that these scenarios are only situations where it’s acceptable if was absolutely necessary for you to go that far, and you should keep the restrictions on self-defence we’ve mentioned above in mind.

If you ever have to raise these defences in a criminal court, note that as the person raising the fact that you were acting in self-defence, you have to produce evidence to prove one of the above criteria (to prevent abuses where a person can kill another then play victim).

As for property, these are the rules…

When you’re defending your property, your right to self-defence extends to causing the death of the attacker when:

A “robbery” happens according to law when someone steals something while causing or threatening death or injury. We’ve covered the difference between a robbery and a theft in a previous article.

2. They broke into a house at night

The crime here is called “housebreaking” which involves breaking into a house through a passage not normally used by people (like through the roof), or through a locked passage (like breaking the locks on the door).

3. They’re committing arson on a building where people live, or where property is being kept

Malaysia doesn’t actually record the crime of “arson”, but it comes under the category of “mischief”, which means causing wrongful loss to a person through destroying property, or reducing its value or usefulness. The legal term for “arson” here is “mischief by fire”.

4. Property is being stolen, damaged, or broken into such that it will cause death or grievous hurt

This is a really broad law but an extreme example of this is if robbers break into a building with guns, threatening to shoot everyone.

This isn’t a free pass to kill thieves and robbers

At the risk of sounding like a broken record, we have to stress the point that killing your attacker should only be a last resort when you absolutely have to do so. The law does not permit us to simply kill any intruder. They could simply be lost, and maybe even mentally unsound. The law imposes these kinds of limits to make sure it is not open to abuse where people can invite others to their home, and then kill them off, claiming that person “broke in”.

In situations where you may find a need to defend yourself, how much force is reasonable to use for self-defence really depends on the situation, if you can call the police or call for help, it’s probably better instead of confronting the perpetrator and getting involved in an unnecessary, risky scuffle where you could get seriously hurt.