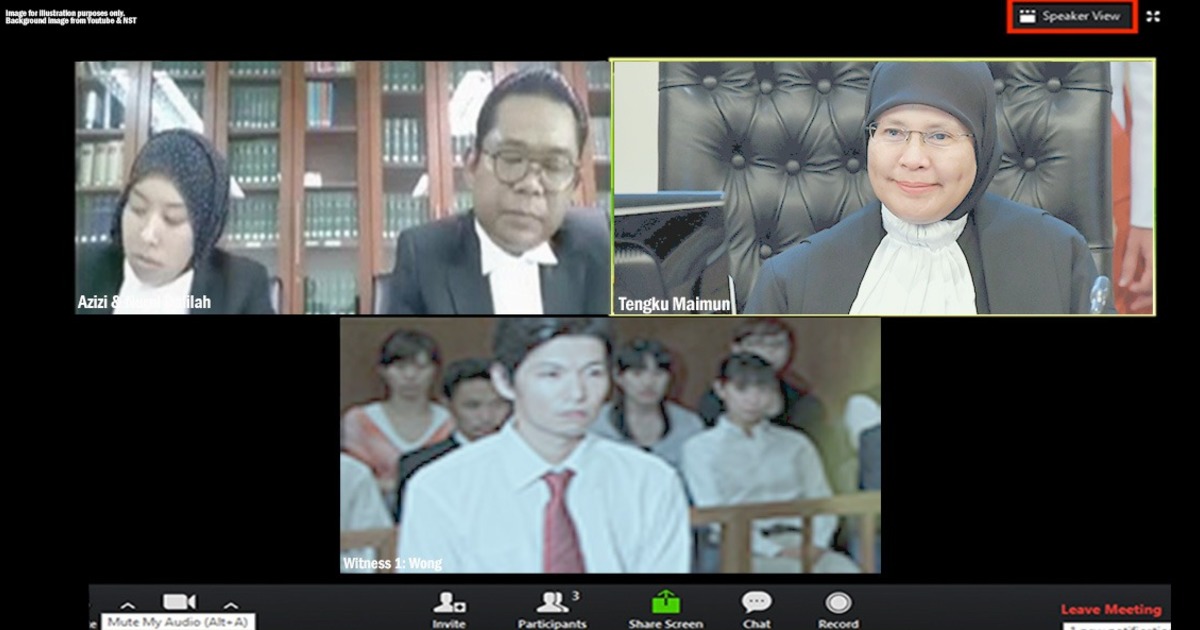 How were Malaysian courts hearing cases during the MCO? We find out

At the time of writing, most of us have probably started going back to the office under the relaxed Movement Control Order. You might have mixed feelings about this, especially when you’ve finally gotten used to WFH.

Now this whole work from home period might have actually made us tech savvy—as all meetings and work-related stuff would have been done virtually. Similarly judges and lawyers, whose jobs include going to court—had to prepare for online hearings.

Generally when people mention courts/cases, we might imagine a courtroom—where the criminal is accused of committing a wrongdoing, the unlucky victim throwing death stares at the criminal, and a whole lot of procedures involved—which brings them to the end product, a verdict from the judge(s) who hears both sides of the story.

With all this courtroom drama we’re familiar with (assuming you’ve watched Law & Order), how exactly were cases heard during the MCO period?

Nothing really changed...but there are added features

We managed to get an insight on how court room hearings were conducted from Wong & Partners—a law firm that was involved in an online virtual ‘trial’ for a case regarding a tax dispute. If you’re wondering what a trial is, it’s the process of finding facts/evidences and presenting it to a judge.

So the lawyers here shared some pretty interesting details about how the virtual trial went, and how it was compared to a normal court proceeding. The highlight of the virtual trial was having to do everything via video conferencing platforms (like Zoom and Skype)—which included sharing a particular document or evidence by presenting it online.

This somewhat helped speed up the process of the trial, as there was no need for the judges to flick through thick, heavy documents like they would at court. What made the process even faster was that all relevant documents were scanned and sent beforehand to the parties involved. So everyone could already prepare for the trial without having to actually be present at court.

So it was basically like an online presentation. But this one comes with a decision at the end...and a person’s life might be at stake.

Which brings us to the next question: How did defendants or witnesses handle the virtual court case?

[READ MORE: Is it scary being a witness in a Malaysian Court?]

The lawyers should talk to the parties before the case

If you ever find yourself involved in a virtual court case (which is highly possible now in the new norm), your lawyer will have additional responsibilities to handle before the virtual case hearing. For instance, your lawyer needs to be in touch with the opponent party, the secretaries of the court and the judge to prepare for the hearing.

Some of the preps that need to be handled beforehand is, an agreement on which video conferencing platform all the parties are comfortable with, to hear the case. Your lawyer should also brief you on the court attire and how to prepare to answer any questions asked, during the hearing. Here’s a tip the law firm gave us on how to prep for hearings:

“...we found that witnesses who can project their statements directly into the camera to be more credible. The video camera should provide a clear and full view of your upper body, rather than pointing overly upwards or downwards.” – Wong & Partners via email to AskLegal.

So if you’re a witness in a court case, you should be prepared to be able to answer or give statements via video conferencing during virtual hearings. Your body language will also play a key role during these hearings, so perhaps it might help to drink up on some chamomile tea to soothe your nerves.

But from the virtual trial that was conducted by the team, it went well in terms of hearing the trial online—and all parties managed to communicate well, even when a cross-examination happened. A cross-examination is when the defence and prosecution lawyers examine (question) the other parties respectively.

[READ MORE ABOUT IT HERE: 4 ways a witness in Malaysian court can remain silent (without getting in trouble)]

However, there are some difficulties that courts are facing in the new normal…

As much as Malaysian courts are slowly becoming accustomed to virtual court trials/hearings, there have been doubts or questions raised about this. This is especially so in criminal cases, as the criminal might be in a jail cell, or cross-examination might become harder to perform on the parties—due to the nature of the crime. Some lawyers raised this issue as seen below:

“As a litigator, a lot will be lost if trials are conducted online…For example if I am conducting a criminal trial and my client is in prison, will I need to be in the same room as him during the online trial?” – Nur Shahidhzul Naqieya to FMT

But as we’ve entered the recovery period, post COVID-19—courts are allowed to operate as per usual starting 1st July 2020. However, safety precautions are being taken by courts, as this writer herself experienced it in the Court of Appeal last week.

Temperature checks were conducted outside court, and social distancing was upheld along with justice ;)