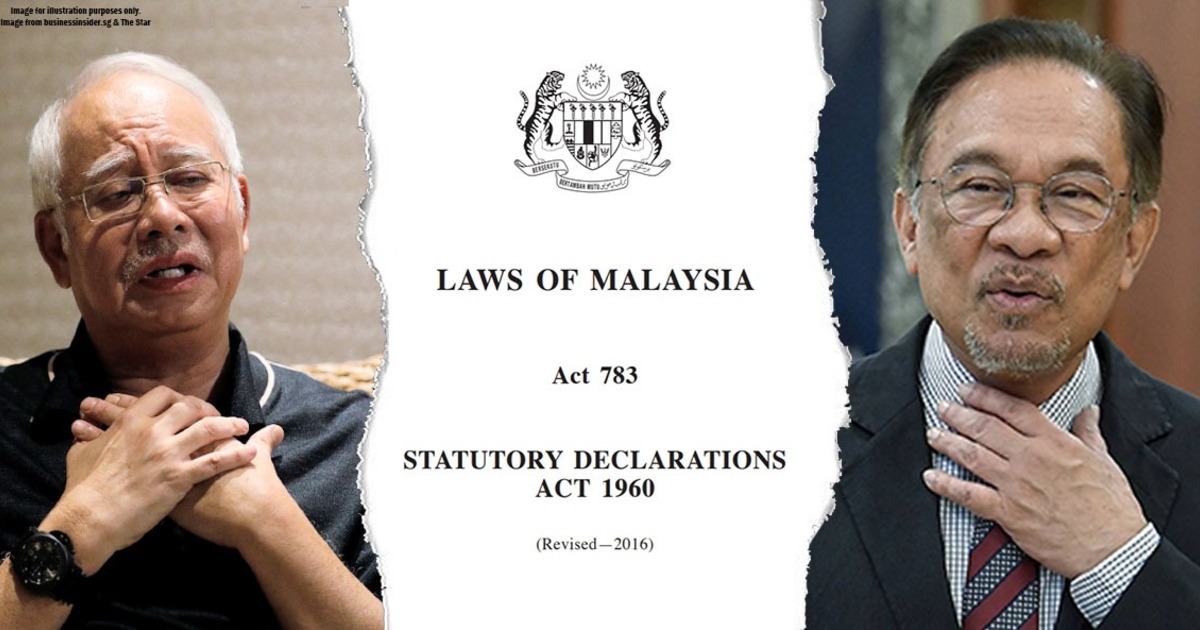 Why is the statutory declaration (SD) on Najib and Anwar taken so seriously?

If you’re reading this right now, then you’re probably no stranger to the recent accusation made against Najib Razak, in relation to the murder of Mongolian model Altantuya, that was made by Azilah—the person sentenced to death for killing Altantuya. But this isn’t the only accusation made on a politician, that came out of nowhere—Anwar Ibrahim was accused of sodomizing his former research officer, Yusoff Rawther a couple of weeks ago.

Apart from the fact that they’re both politicians, Najib and Anwar share another similarity now: There were accusations made against them in the form of statutory declarations (SDs), accusing them for the crimes above.

But this isn’t the first time a formal, written declaration sent the media into frenzy. You might remember how this one judge allegedly revealed how corruption spread through Malaysian courts via an affidavit. This is similar to that, but SDs come with a few differences...

If you’re buying a house for the first time, you’d probably have to sign a statutory declaration. Think of it as written proof to confirm that you’re a first time house buyer. You can normally get this done through a Commissioner for Oaths.

[READ MORE: What is a Malaysian Commissioner for Oaths and what do they do?]

But SDs aren’t just regular written statements. The difference between this and a Facebook post is that its filed under oath, and may be used in court. Here’s how the President of the Bar Council put it:

“A Statutory Declaration is commonly used to allow a person to declare something to be true for legal requirement when no other evidence is available. – Datuk Abdul Fareed Abdul Gafoor via The Star.

Basically, it is used to declare a fact/statement, which has no proof to back up that it existed in the first place. To ensure people don’t make false declarations, there is even an Act called the Statutory Declarations Act 1960. The Act goes on to provide penalties which are mentioned under Section 199 of the Penal Code:

In essence, the Act states that those who make a false SD will be charged for perjury (lying under oath) and can be jailed for up to 7 years. So if the court finds Yusoff or Azilah to be lying in their SDs they can be charged for a crime.

Now if you’re a lawyer or you happen to read our previous article on affidavits, you might be able to tell the difference between SDs and affidavits. But if you can’t, don’t sweat. Affidavits are basically sworn statements too—but the distinction comes to play on how it’s used. Affidavits can only be used in court to disprove facts made by the other party.

Now that we know how SDs work, how exactly is this going to implicate Najib, Anwar or their accusers?

The court can use the SD to charge Najib and Anwar

Just because you made a SD, doesn’t mean it’ll be used in court. The court will decide if it wants to use the content in the SD to evaluate the case. So the current SDs that are pointed at Najib and Anwar may or may not be used prior to the investigation.

The authorities will first look into both the SDs, to see if it can be used to help the ongoing investigations. If the information in the SDs are valid and can be submitted as proof, the authorities must investigate further to find any new evidence.

As for now, there’s no legal action being taken YET on Anwar and Najib. However, Anwar Ibrahim has filed a civil suit claiming the SD against him was defamatory.

So for now, the SDs will be investigated to prove its validity. However, if there is no strong evidence in either case, then the accusers Azilah and Yusoff can be charged with perjury—and the claims made in the SD will not apply.