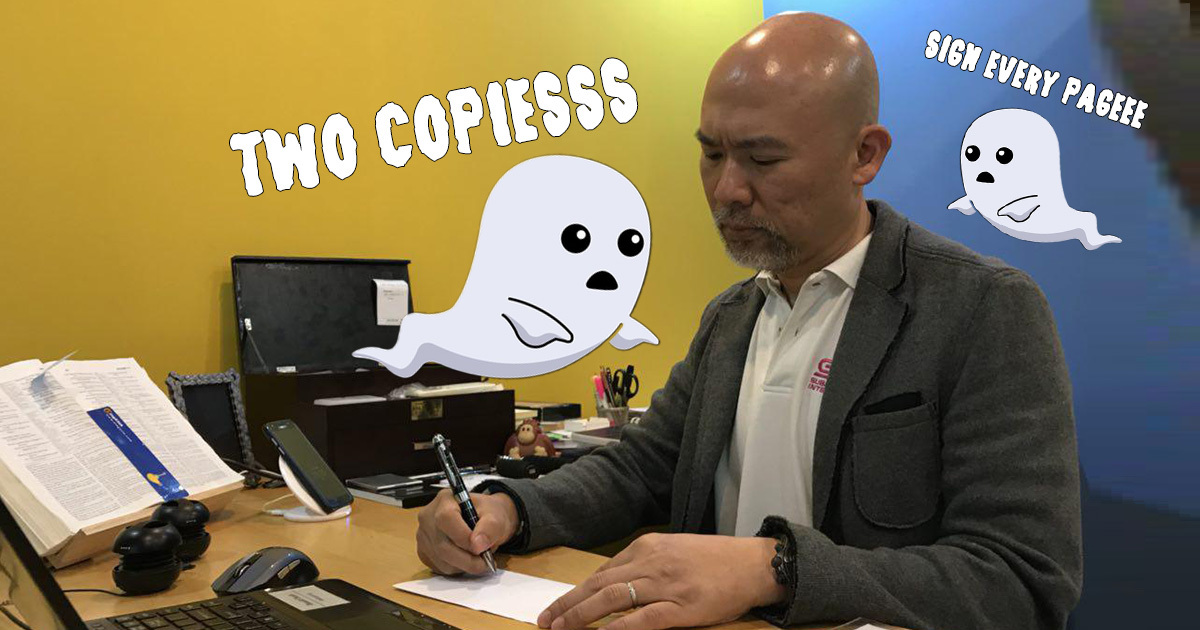 You sign an employment contract to accept your job, a hire purchase contract to buy your car, and a loan agreement to buy your house... Whether we realize it or not, we sign contracts all the time, even to get something as simple as checking the “I agree” box when signing up for an online service. They’re often called by slightly different names: contract, agreement, mutual covenant… but in Malaysia they are all governed by the Contracts Act 1950.

But for contracts on paper, you get asked to do some things that seemingly don’t make sense, like putting an initial on every page on two (or more) copies of the same contract. But why would you do that other than to boost pen sales and give you carpal tunnel?

We do little things when signing contracts that we don’t always understand the reason for, but they can be quite important when it comes to making sure that the contract works. To start, we need to begin with one of the foundations of how contracts work…

It’s so obvious that it seems silly to mention, but people have been known to get caught up and forget to sign their contracts. But did you know that even if you don’t sign, the contract can still take effect?

[READ MORE - Can I sue someone who promised to marry me (but doesn't)?]

It might surprise you to know that actually, signing the contract is not absolutely necessary for the contract to be valid! You can actually form a legally-binding contract over coffee and conversation. To cut out having to explain a whole bunch of legal terminology: a contract contains a set of proposals, which two people can agree to. To make a proposal, you just have to offer to do something, in exchange for the other person doing something else:

Contracts Act 1950 - Section 2(a)
“when one person signifies to another his willingness to do or to abstain from doing anything, with a view to obtaining the assent of that other to the act or abstinence, he is said to make a proposal;”

The reason why we sign contracts instead of relying on words of honour is, well, words aren’t exactly the best guarantee, and it’s very difficult to prove exactly what a person said without recording it in one form or another. The easiest way to prove that a contract exists is pulling out a piece of paper with two signatures on it - something we practice so much that you might not have known why we do it in the first place.

You also usually put down the date when you sign a contract, usually next to or below your signature. This is yet another underappreciated detail when we sign contracts. It’s usually more important when your contract is time sensitive and you need a definite date when the contract started operating.

For example, if you’re renting an apartment from someone, you need to put a date to when the contract takes effect. Without a date, who can say for sure that you rented this apartment on 15th May 2018, and not 15th May 2015? Suddenly, you could get accused of owing 3 years of rent because no one can prove for certain when you started renting. That isn’t the most likely example that could happen to you, but maybe you can imagine the kind of situation where you apply for a loan in March, but because you didn’t put a date down, here comes a dispute on whether you actually applied in February and your instalment is already 1 month late.

Sometimes your arrangement requires a customized contract because the “standard template” that’s usually used just isn’t suitable. In these situations, you’d usually get either your lawyer or their lawyer to draft a contract, which would be reviewed and revised before you sign it.

If you’re not actually finalizing what the contract should be yet, you should not put your signature on any drafts you send or receive. Doing so would amount to accepting the contract, and you might run into issues changing it later on unless you come to an agreement with the other party. Section 4(2) of the Contracts Act states that:

Depending on how you’ve structured your communications, signing a draft might not be an issue because the other party won’t be signing it anyway. But it’s best to play safe and not sign any drafts at all - if you were supposed to pay RM10,000 but a typo made the contract say RM100,000 instead, you have a binding contract on your hands if the other party signs it, and that could put you through unnecessary hassle.

To be clear, you can still write a new agreement with the other party to get the old draft rescinded (basically means “cancelled”) - but because you don’t know how cooperative the other party will be, it’s best not to let yourself land in this situation in the first place.

3. Make sure to read every attachment

Pretty much everyone these days has signed some sort of contract online. A prime example is Apple’s terms of service - most of us just skip the text and click “I Agree” right at the end. Partly it’s because there’s just so much to read, but mostly it’s because we wouldn’t understand it even if we did.

[READ MORE - What happens if you sign your contract without reading it in Malaysia?]

These attachments to your contract are binding upon you, whether you read them or not. So it’s best to make sure you understand what you’re getting yourself into. The argument that you didn’t read it and therefore it doesn’t apply to you doesn’t stand well in court because as long as you were provided with the documents, it’s assumed that you should have read them. The attachments could be a separate bundle of documents that the other party must provide to you for reference, but it can also be provided to you in a link, like for online contracts (so don’t get fooled by how simple it can look to sign up for something online).

Make sure you understand the legal and practical consequences of your contract and not just rely on what the dealer is explaining to you (they might have it wrong, not to cheat you but because they don’t know any better). Keep a reference of the additional documents apply to your contract. If any disputes do come up or you have any questions about how something works under your contract, you’ll know where to look for answers, as well as the rights and responsibilities you and the other party have.

4. Always ask for a copy

The practical reason to ask for a copy of any contracts you sign is this: you need to be informed of what you’ve signed so you have a record of your rights and responsibilities in the contract. How would you fulfill a duty if you don’t know what that duty is? It would be ridiculous if you had to memorize exactly what you signed.

If you’re not given a copy of your contract, you should ask because, legally speaking, the other party is not required by law to furnish you with a copy. While that might be totally fine if have complete trust in the other party, but otherwise it’s best to play safe. If only the other party has the contract, there’s always the potential for fraud.

As an example, a dishonest person might change the terms on the contract without telling you, or might print an entirely different contract and just attach it to the page with your signature. If a dispute arises and you don’t have a copy, you don’t have many ways to prove that the contract was not the original.

It’s a pain to flip through that thick contract and sign on every single side, but this move is actually recommended by lawyers for a few reasons:

Signing every page is doubly important in cases where you never get a copy - which is usually the case when you sign contracts with service providers like for your internet and mobile phone plans. But not to worry, you actually have certain protections under the Consumer Protection Act 1999, which deals with unfair contract terms. In summary, unfair terms are any terms that are oppressive, or release the dealer from too many responsibilities, and generally anything that makes life extra difficult for you.

These protections exist because these service contracts are often in standard form and you don’t get a chance to negotiate, they can be complex and you have to rely on the attendant’s explanation given to you (which may or may not be accurate), and the service provider is very often allowed to change the terms of service as they please. One example is those no refund policies that sound pretty unfair or even ridiculous - a lot of them are actually illegal.

Always read your contract and make sure you understand

When you sign a contract, it’s best to make sure you understand exactly what you’re signing, and what would happen in case certain scenarios pop up. It might be tempting to skip reading everything and just get the agreement settled, but the contract outlines your legal rights and responsibilities, which you’ll need to know if a dispute pops up.

Take the time to go through each part and get at least a rough overview - some contracts can have really cutthroat terms that you should bring up, and possibly even refuse to sign until they are changed. Consult a lawyer if you have to, especially with high value contracts like for property and business.