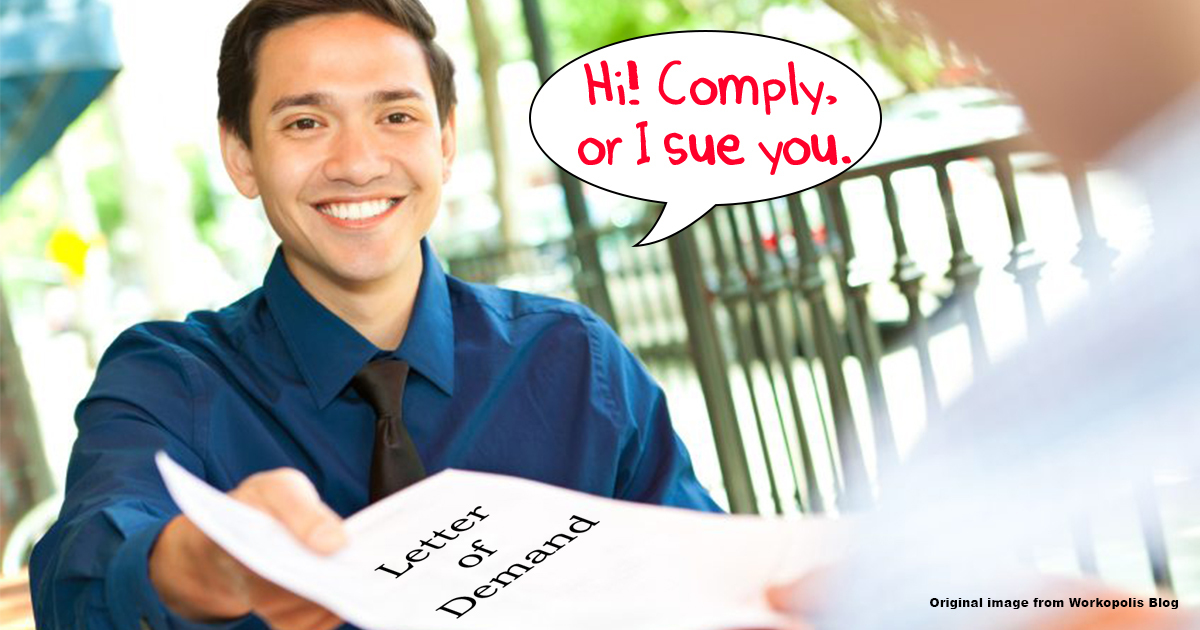 Thinking of suing someone in Malaysia? Consider sending them a Letter of Demand instead.

about 3 years ago JS Lim

Have you ever found yourself in a situation where:

Depending on how cooperative they were, you may have already settled the matter with them. But if they haven’t been responsive (or worse, giving you a hard time), then you start having to consider the last resort - suing them in court for a long drawn lawsuit. You really don’t want to do that because it drains a lot of your time and money, not to mention the suspense of awaiting the outcome for months or even years.

No need to fret, because you actually have another option before resorting to a full blown legal proceeding. It can be a “DIY” solution, but may not work in all situations, and you may need a lawyer’s backing if the other party isn’t taking you seriously.

You can send them a Letter of Demand (LoD)

A Letter of Demand is usually sent as a formal request for the recipient to meet some demands, like to pay money that is owed, or to rectify a wrong that was committed - this will be your debts owed, breaches of contract, defamatory statements, etc. Although we can technically send LoDs by ourselves, we usually do this through our lawyers because well, let’s just say that the threat of legal action is a powerful persuasive tool.

[READ MORE - If someone borrows money and doesn't pay you back, you can file a "small claim procedure"]

But speaking in practical terms, the main reason you want to send a Letter of Demand before considering legal action is to give the other guy a last chance to resolve the matter privately. People generally prefer to avoid litigation since it takes a toll on body, mind, and bank account alike.

What’s more, in cases where lies have been spread to damage your reputation, you’re not really looking for financial compensation, but an apology and for them to retract their statement and “heal” your reputation. Sending that LoD is infinitely better in this case. So all in all, you’re really sending the LoD for your own sake as well.

The backup plan with your LoD is to use it as evidence in court that you’ve attempted to settle the issue outside of court, but for one reason or another, the other party has refused to comply. This can actually strengthen your case if the matter comes to a court battle - so even in the worst case scenario, sending that LoD will help your position.

You might be wondering if you can avoid paying legal fees for the Letter of Demand, especially if your case is too small to spend big bucks on, but also too big to ignore. Well, you might want to know that...

You don’t always need a lawyer to send an LoD

Sending an LoD can sound like solemn official business that involves sending a formal letter that’s properly formatted (and it is), but it isn’t too complicated to execute by yourself. You can probably get by writing your own LoD for smaller claims, like simple debts to be paid up and small defamation cases, but keep the option of engaging a lawyer open as you may not know what to include for more complex claims.

The thing you need to keep in mind is that an LoD you send by yourself obviously carries less weight than if you got a lawyer to do it, and you may also not fully understand how strong your claim is (so you also may not know what you can or should demand). If the other party does not take your LoD seriously, getting a lawyer to back your words up can do wonders.

Here’s a rough idea of what you should include in a Letter of Demand:

Other general tips are to keep your letter polite, make sure your points are clear and precise, and only to make threats you are prepared to follow through on. Make a copy of your letter before sending it out, and please, please don’t harass the recipient even if you are in the right as you can sabotage your own case with that.

Okay, you might feel that it’s good to know how to send an LoD, but maybe you’re a little concerned about what if the reverse happens and you receive an LoD instead. What should you do then?

Whatever you do, don’t ignore a Letter of Demand

Some of us may think that if the sender can’t follow through on their Letter of Demand (or even if the allegations towards us are untrue), it should be safe to ignore the letter, right?

The law on this matter is pretty clear thanks to the case of Small Medium Enterprise Development Bank Malaysia v Lim Woon Katt that happened in August 2016. The Court of Appeal in the case decided that failing to respond to a Letter of Demand will weaken your case if it goes to court. To be fair, not responding to an LoD is not automatically an admission of fault, but ignoring it can cost you when the court is deciding whose version of events is more credible.

If you’ve been wrongfully accused in an LoD, you can and should send a prompt denial to defend yourself, especially if it involves commercial transactions.

In any case, what you should do after receiving a Letter of Demand can be summarized in the following steps:

b) Comply with the letter’s demands OR

Negotiating on a “without prejudice” basis basically allows you to negotiate the settlement without making an admission of fault - which will help preserve your right to defend yourself if the case still ends up in court later on. Having a lawyer’s advice here can help a lot.

Remember - a settlement is better than a court battle

If you ever have to send a Letter of Demand, keep an open mind towards negotiations from the recipient. You may not like them very much and you may not even be on speaking terms, but a settlement deal is always going to be better than dragging out the matter in court

Even if you’re offered a lower compensation than you wanted, it can be advisable to accept it if it’s still reasonable - you probably end up losing less than if you went through with a lawsuit anyway. The point of the Letter of Demand is to make sure you get compensated and the situation is rectified, and not to escalate things unless absolutely necessary.