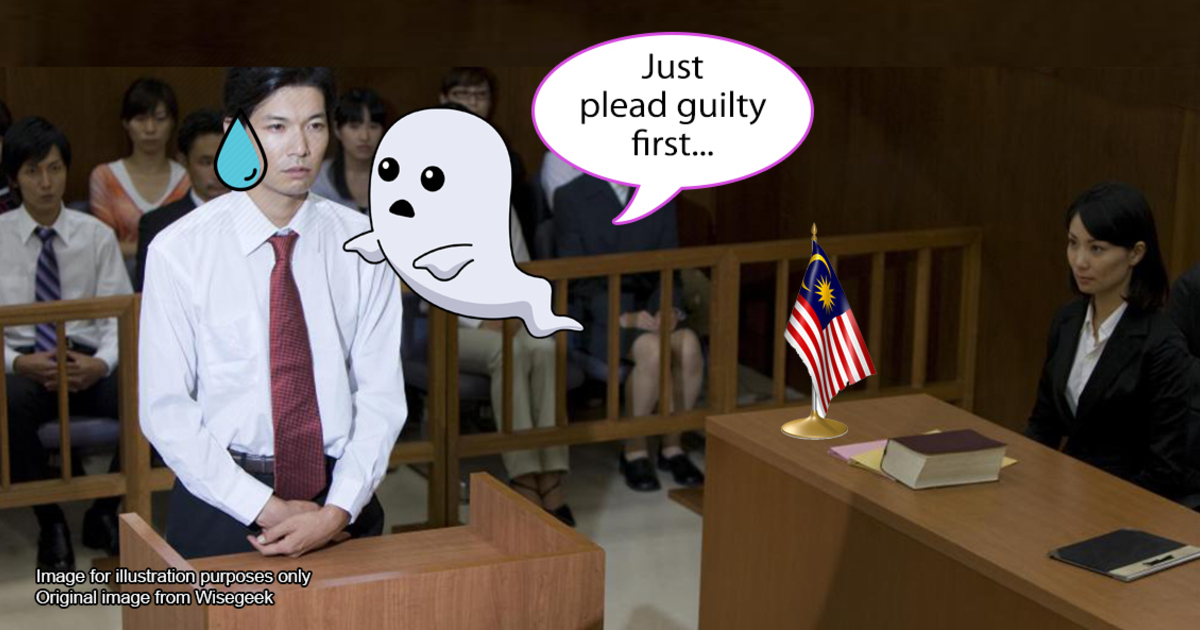 Why would a lawyer ask you to plead guilty to a crime in Malaysia?

If you’ve watched (usually American) courtroom dramas like Suits or Law and Order, you’d usually come across a scene where the judge asks the suspect “How do you plead”, in which the suspect would either plead guilty or not guilty.

But you may also be surprised to know that this also happens in our own Malaysian courts – in real life!

So now you know that a suspect is given the opportunity to plead guilty in real life, it happens across different legal systems, and your lawyer might advise you to do it. The questions that may come to mind is –

Well, for one thing, pleading guilty doesn’t automatically mean you’re guilty – The court is basically asking you whether you’re going to admit or deny responsibility of the crime you’re being accused of. One of the few reasons why your lawyer may ask you to plead guilty is because there is a chance that you would get a lighter sentence.

[READ MORE: If guilty, you don't have to serve your full sentence in Malaysia because.... Discounts]

On TV, pleading guilty usually means it’s a cut to the police station with the detectives talking about the case over coffee just before the credits roll; but in real life, it’s actually a lot more complicated than that. In real life, A lot of caution is applied when it comes to a guilty plea, because there is a risk that you may have unknowingly signed away your right to a fair trial. This is because...

There is no trial if you plead guilty

Under Section 173(b) of the Criminal Procedure Code, the court must make sure you understand the consequence and nature of a guilty plea as there are two very important consequences that may come as a result.

The first consequence is that you will lose your right to appeal. This basically means that once you plead guilty, you cannot bring your case to a higher court to argue that you were innocent. This was laid out in the case Gabriel v PP, where Gabriel pleaded guilty to theft and was sentenced to prison and a fine. He later tried to appeal to the High Court but was rejected because… well, he pleaded guilty.

The second consequence is that there will be no trial. So usually the trade-off is that, for saving the courts the time and money of putting you through a trial, the judge MAY give you a lighter sentence in return. However this is not 100% certain, as the judge may still give you a maximum sentence.

[READ MORE: How does a judge decide what punishment to give a criminal?]

An example of this was the case of Lee Weng Tuck v PP, where Lee was charged with drug trafficking – a crime which is punishable with the death penalty if found guilty. Although he pleaded guilty, he was made to understand that the judge could still give him the death sentence, even though the death sentence wasn’t mandatory.

It’s either guilty or not guilty, no buts

In lawyery terms, a guilty plea by the accused has to be unreserved, unqualified, and unequivocal, as per Section 173(b) of the Criminal Procedure Code.

In normal human speak, this basically means when you plea, it has to be without conditions and exceptions. To illustrate, when the court asks you to plead, you cannot go “errr...I plead guilty, but...”.

There are actually those who tried to plea with conditions, and this is how the courts approached the matter. In the case of PP v Cheah Chooi Chuan, Cheah hilariously stated he would plead guilty if the complainant (the person who accused him of the crime) slaughtered a chicken in court. What made it even more hilarious (unless you’re with PETA) is that the complainant actually went through with it. The chicken was slaughtered in the compound of the court and Cheah went on to plead guilty. Fortunately for the integrity of the law, when the case was revised, the court decided it was not a proper guilty plea for the reasons stated in the first paragraph.

A similar plea (no animals harmed this time) was given by the accused in PP v Margarita B Cruz. Here Margarita (burrrp) was charged with unlawful possession of passports. When the court asked Margarita to plead, she actually pleaded guilty, but went on to add that her two friends told her to keep the passports. Despite the plea, the court went on to convict her. Margarita appealed her case and said that her plea of guilty was not unconditional, and it should not have been accepted in the first place.

You may still get asked questions

When you plead guilty, you actually would not immediately be found guilty. The prosecution will be asked to state brief facts of the case and tender some evidence.

So what exactly are brief facts? The courts actually took the opportunity to explain the meaning of ‘brief facts’ in the case of Lian Kian Boon. The case itself isn’t as interesting as those highlighted above, but the main point is that the court defined brief facts as those facts necessary to establish the charge, and those facts which the prosecution can prove”. So for example if you were charged for murder, the prosecution would have to prove that you killed the victim and you intended to do so. They would probably have to state that you stabbed the victim, and you actually had some ill will towards the victim from before.

Once the brief facts are given to the court, the court will then ask whether you admit to those facts given by the prosecution. If you do, the court can then record a conviction and then sentence you accordingly. If you don’t, the court must set the case down for trial.

You can actually cancel your guilty plea

In the earlier mentioned case of Lee Weng Tuck (the drug trafficking one), Lee actually tried to withdraw his guilty plea with the excuse that he wasn’t feeling well and he didn’t know the punishment for the crime was death. The question the court had to decide on was basically – Can a guilty plea be withdrawn?

The court actually decided Yes – An accused can withdraw a guilty plea, but it’s not a 100% confirmed thing. It’s entirely up to judge to allow or reject a guilty plea withdrawal.

Sometimes you still need a lawyer to plead

Usually when you’ve messed up enough to be facing charges in court, you’ll expect yourself to be accompanied by a well suited up (in Malaysia’s case, robed up) lawyer. But if you are gonna admit to the crime (via a guilty plea), why would you need a lawyer?

The need for a lawyer was illustrated in the case of Low Hiong Boon v PP which concerned a trainee nurse who was charged with killing of a baby. Low didn’t actually kill the baby directly, but the facts were that she was careless enough to allow the baby’s mother to administer an excessive amount of medicines to the baby. If you think the facts are confusing and may involve an element of science, you aren’t the only one. In such situations, it is best that the accused have a lawyer when she pleads, to understand the legal and factual complexities of the case better (and that is what the court decided).