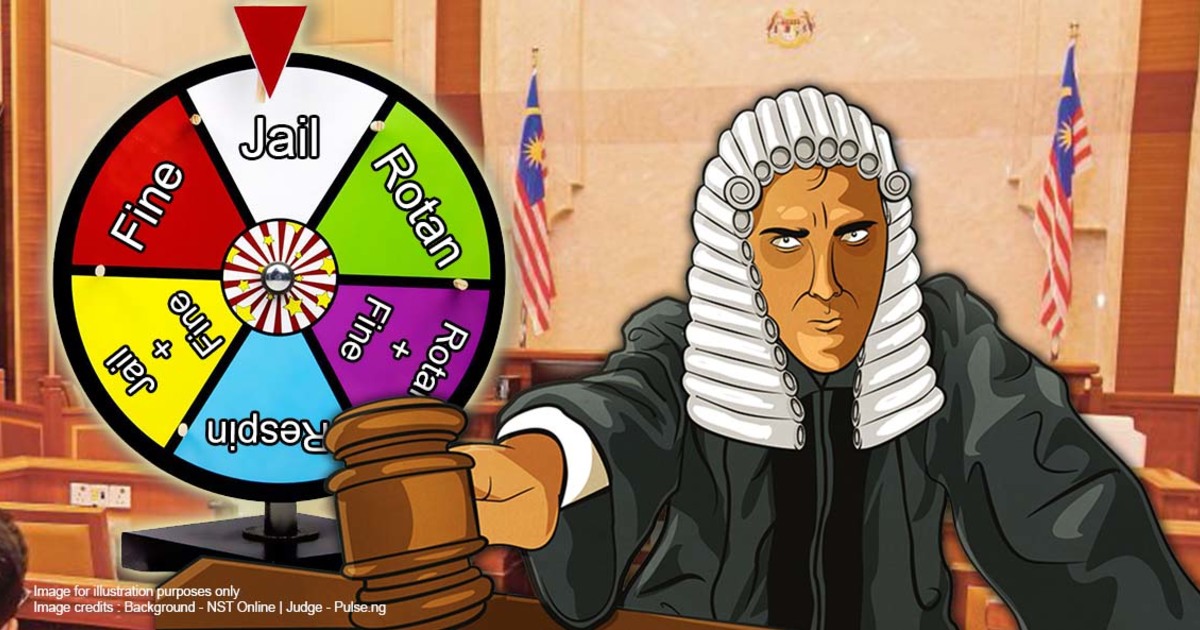 How does a Malaysian judge decide what punishment to give a criminal?

We always read about Malaysians getting punished for crimes through various ways. For example, you can get fines for traffic offences, jail time for robbery, whipping for certain hardcore crimes, or even the death sentence. In some cases, you can get even get a combo like a fine AND jail time or jail time PLUS whipping.

With this, it seems like there’s a really long list of ways to punish criminals in Malaysia. However, there are technically only 6 core types of punishment in Malaysia and they are guided by three main principles.

Judges have to punish according to the law

“Whoever commits theft shall be punished with imprisonment for a term which may extend to seven years or with fine or with both...”

This means that if a judge finds Abu guilty of theft and this is Abu’s first offence, his time in jail cannot exceed seven years. In addition to (or instead of) jail time, the judge also has the power to impose a fine on Abu. However, if the judge were to punish Abu with 10 years in jail, the sentence will not be legal because it would be going against section 379 which caps the maximum number of years at 7.

Another example is the punishment for murder – which comes with a mandatory death sentence. If Ah Kok was found guilty of murder, the courts cannot let him off with 30 years in jail or a fine. It must and can only be the death sentence for Ah Kok. Anything less would be an illegal sentence.

With this in mind, you may be surprised to know that punishments in Malaysia essentially consist of SIX core types.

The 6 kinds of punishments in Malaysia

When we say that Malaysia has 6 different kinds of punishment, we don’t mean that it’s like a build-your-own-burger situation where you get to customise your punishment. “Yes, I would like a dash of jail, a sprinkling of parole, hold the whip please.”

Let’s start with the most serious punishment of the lot…

Malaysia still practices the death sentence and it is reserved for crimes such as murder, drug trafficking (which is in the works to be abolished), rape causing murder, certain acts of terrorism, or treason.

An example of the death sentence being utilised for a crime other than murder or drug trafficking was in the case of the Pudu prison siege where 6 inmates took a doctor and his assistant hostage in the prison clinic. The inmates were eventually brought down by Malaysia’s UTK and the those involved were convicted and hung to death.

The whipping here is not like the kind we used to receive as kids where red marks linger for days but the whipping that prisoners go through are capable of tearing their skin and cutting into the muscle. Amnesty International published a report on it and their description was:

"Across Malaysia, government officials regularly tear into the flesh of prisoners with rattan canes travelling up to 160km/h. The cane shreds the victim's naked skin, turns the fatty tissue into pulp, and leaves permanent scars that extend all the way to muscle fibres," – A blow to humanity: Torture by judicial caning in Malaysia, Amnesty International

We found a video, apparently of a whipping in Malaysia, and you can watch it here but note that the trigger warnings. For this reason, courts can only sentence a maximum of 24 strokes for any offence. Aside from that, there are certain groups of people that cannot be whipped:

There are a bunch of sections in the Penal Code that contain offences that allow the courts to impose whipping sentences on men above the age of 50, and they are basically sexual offences like rape or inciting a child to commit an act of gross indecency.

Whipping also cannot be carried out in installments and you must be certified to be fit by a medical officer before the whipping. If you fail to complete the whipping because you are considered unfit for it, section 291 of the CPC kicks in:

“In any case...a sentence of whipping is wholly or partially prevented from being executed the offender shall be kept in custody till the Court which passed the sentence can revise it, and the said Court may in its discretion either remit the sentence or sentence the offender instead of whipping...to imprisonment for a term which may extend to twenty-four months”

This basically means that if you are sentenced to 10 whips, all 10 whips must be given at the same time. It cannot be given over an extended period of time and, if you are unable to carry the entirety of the whipping or a part of it, the courts are allowed to extend your prison sentence as a “replacement”.

There are generally two types of imprisonment – for life or for a fixed term.

Imprisonment for a fixed term, on the other hand, means as stipulated by the relevant law. In our theft example above, a thief can be punished with up to 7 years in prison. This means that the maximum sentence that the judge can impose is 7 years buttttt...there is one exception found in section 75 of the Penal Code which basically says that repeat offenders of certain crimes can be given double the punishment.

Aside from getting double jail time, repeat offenders can also be sentenced to police supervision after the completion of their jail sentence. This is not to be confused with parole.

Parole happens when the prisoners are allowed to serve out the remainder of their jail terms outside prison, while reporting to their parole officers. Police supervision, on the other hand, takes place after you complete your sentence.

“When any person subject to the supervision of the police is, while still subject to such supervision, sentenced to a term of imprisonment within Malaysia any term spent in prison shall be excluded from the period of supervision.”

Fines are pretty straightforward. Judges can impose fines when the law allows for it and give you a reasonable time to pay it. If you fail to pay the fine within the stipulated time, the courts are allowed to throw you in jail instead. This is allowed in section 283 of the CPC where different values of the unpaid fine amounts to different jail sentences. For example, if the fine is RM500 and below, your jail sentence in default of paying that fine cannot exceed 1 month.

Compensation to the victim happens when you have been found guilty of a crime but the court is of the opinion that given certain factors such as your age and health or triviality of the offence, it is not practical to punish you beyond a nominal punishment (it simplistically means small punishment). The courts can also make an order for you to pay the prosecution’s costs in certain cases.

Malaysians might be familiar with this phrase from when Rafizi Ramli was released on a RM10,000 good behaviour bond after he was sentenced to 18 months in prison for violating the Official Secrets Act.

What it means is that if you have been found guilty of an offence, the courts can choose to allow you to pay a certain amount of money into court and in return, the court will impose certain conditions in the bond that you will have to adhere to for a certain number of years. The conditions imposed will be geared towards ensuring that you will be on your best behaviour and then you will be allowed to evade jail time.

If you breach the conditions of the bond, the courts are entitled to forfeit the money you paid into court. It is to be noted that this order can only be made by the court for less serious offences. For example, when a “Datin” was released on a good behaviour bond after abusing her maid, there were parties that argued that this order was illegal as the offence was serious. Consequently, her sentence was revised to eight years in prison.

At the end of the day, all these punishments lead us to one corny conclusion…

Crime does not pay

Well technically, it DOES pays but not in the way you think since you are the one paying for it and you would be paying for it – in a pretty unpleasant manner.