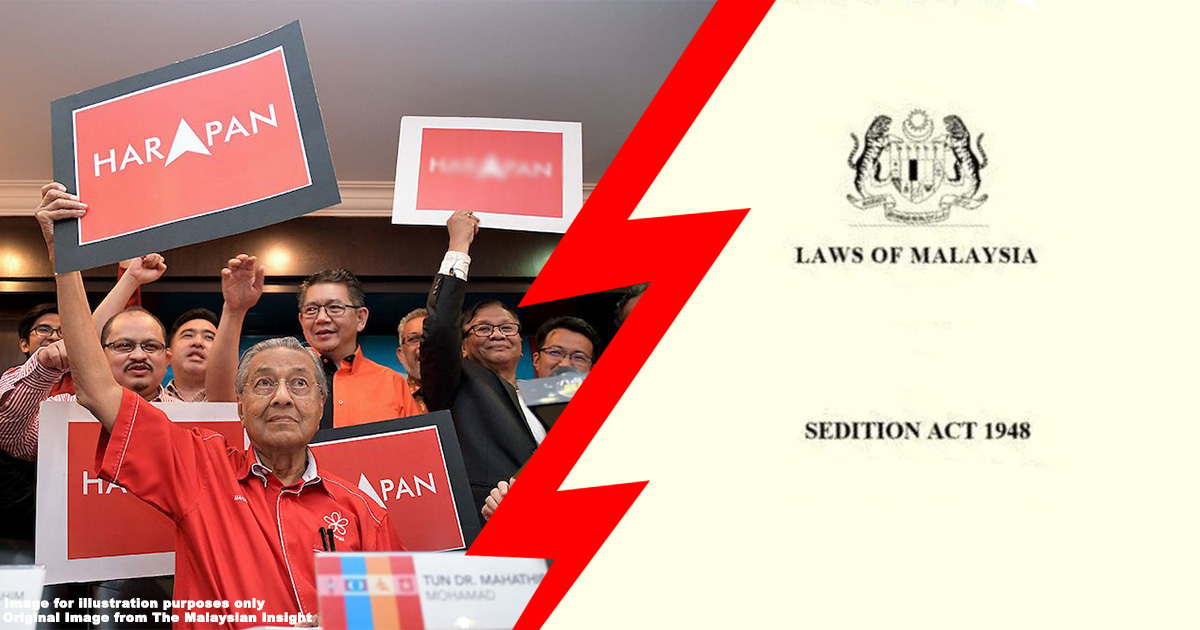 Here are some laws Pakatan Harapan promised to reform. But what’s wrong with them?

It’s a historic moment in Malaysian politics with Pakatan Harapan ousting Barisan National for the first time in 61 years. With this new government coming to power (that a lot of us still have a hard time believing happened), they made 10 promises in their manifesto to be delivered within 100 days of their election.

But while we’re all watching to see if they can deliver on promises like abolishing GST, the Pakatan Harapan government has also promised to abolish certain “oppressive laws” that we have in Malaysia. Even if you don’t know which laws they are, you might have heard about some of them before such as the Prevention of Crime Act 1959, the National Security Council Act 2016, and of course - the Sedition Act.

These were specifically targeted by Pakatan Harapan because they give the government too much power. As Dr Mahathir put it at a press conference:

“Our stance is that when we form the government, we will repeal what is deemed oppressive to the people,”

- Dr Mahathir, as quoted by The Star

We spoke to lawyer Eric Paulsen from Lawyers for Liberty, who has also released a statement on this subject, to get at the finer details of these oppressive laws. To make sure we don’t take you on a roller coaster, we’ve put some of these laws into 3 main categories below.

Eric Paulsen tells us one of the biggest problems with SOSMA is that it allows the prosecution to take secret evidence. Normally, evidence that is used against you in court will be cross-examined by your lawyer to look for inconsistencies and to challenge the evidence. With SOSMA, the prosecution is not required to even show the evidence in court - they just need to summarize what the evidence is and what it proves.

The prosecution could invent a person or come up with evidence that doesn’t really exist, and you have no way of telling if it’s real. How can you challenge the evidence if you don’t know what it’s about?

This law could be used to detain people for up to 21 days under Section 4, instead of the normal period of 24 hours before you must be brought before a Court. Furthermore, you can be detained for 2 years if the Prevention of Crime Board thinks it is necessary - and those 2 years can be renewed again… and again... and again...

Prevention of Crime Act 1959 - Section 19A(1)
“...direct that any registered person be detained under a detention order for a period not exceeding two years, and may renew any such detention order for a further period not exceeding two years at a time, if it is satisfied that such detention is necessary in the interest of public order, public security or prevention of crime.”

The Prevention of Terrorism Act 2015 works similarly with a few differences. Pakatan Harapan has expressed in their manifesto that they will keep this law, though some of the draconian provisions in it will be changed.

Laws that can be used to silence the people

The big bad law almost every adult Malaysian has heard of. There are a number of provisions in there that make it illegal to criticize the government, the justice system, the Rulers of each State and the Agong, and even certain provisions in the Constitution. This was a law enacted during a time when Malaysia was under Communist threat, and is probably not very useful in this day and age. We can find disagreement from the people pretty useful to keep our politicians in check and make sure the people are heard.

This law seems rather innocent like its name, but it actually gives the government the power to stop students from having “political party activities” on campus. This law also used to say that students can’t support or oppose any political party whether Malaysian or not, until Muhammad Hilman Idham challenged it in this case.

But even after that, the UUCA still prohibits students from doing anything that supports or opposes “any society, organization, body or group of persons which the [University] Board determines to be unsuitable to the interests and well-being of the students or the University”.

This law regulates the licensing of newspaper printers in Malaysia, but has a provision giving the Home Minister the absolute power to revoke or suspend licenses whenever he wants. It also says that the Minister can ban any printed material:

On what should be done instead, lawyer Eric Paulsen agrees with Pakatan Harapan that the PPPA should be abolished:

“I think they should just abolish the entire PPPA because it is quite outdated. Newspapers should just be licensed administratively. If you want to open a shop, you should be allowed to, there shouldn’t be a provision saying ‘if you don’t listen to us then you have to close’.

If the newspapers start writing things that incite racial hatred, then the Penal Code will apply.”

The Penal Code provision that Eric is talking about is Section 505 - “statements conducing to public mischief”, which covers making statements or spreading rumours with the intention to cause public fear or alarm, or incite people to commit crimes against others. The punishment is up to 2 years of prison and/or a fine.

Our fake news law is very new, passed right before GE14. It’s not mentioned in Pakatan Harapan’s manifesto itself, but was brought up by Dr Mahathir in a press conference.

While it’s seen as a much needed law which has been discussed in other countries, the problem with it is actually how broad the powers are, and how it can be used to accuse anyone who disagrees with the government. You can read more about it here.

Eric Paulsen tells us that we don’t really need the fake news law because Section 233 of the Communications and Multimedia Act 1998 (CMA) and Section 505 of the Penal Code are sufficient with a few amendments.

“Fake news is not a new phenomenon, it’s just an old one that is circulated on a new medium. People used to go around post boxes and put in surat layang - that was the fake news of the day. Today, people use social media.”

And then there’s the NSC Act…

Our National Security Council Act 2016 was passed with the official purpose of creating a specific set of rules and operating procedures for the National Security Council (NSC). The NSC has existed since the May 1969 riots, but this law actually gives the Prime Minister A LOT of power - the power to declare an emergency in a space as small as your bedroom up to the entire country, and even bypass the Agong’s approval which is usually required to declare an emergency. It pretty much gives the Prime Minister the absolute power to declare martial law anywhere in Malaysia.

With those kinds of powers, it’s no surprise Pakatan Harapan has named it as one of the laws they want to revoke in their manifesto.

When you revoke a law, it means that you take it down entirely, usually because it is no longer applicable to the times, or because there is a new law replacing it. In legal speak we call it “repealing a law”, and it must be agreed to by a majority of Members of Parliament (MPs) as per Article 62 of our Federal Constitution.

However, some of the laws listed for change by Pakatan Harapan are useful to us, but have some provisions in them that give the government too much power or too much discretion. Those provisions will be removed to help the people keep the government in check.

Keep in mind that none of these laws have been repealed or amended yet at time of writing (16th May 2018), so look forward to these changes, but keep watch over our government to make sure they really happen. As the English politician Lord Acton once said: power corrupts, and absolute power corrupts absolutely.