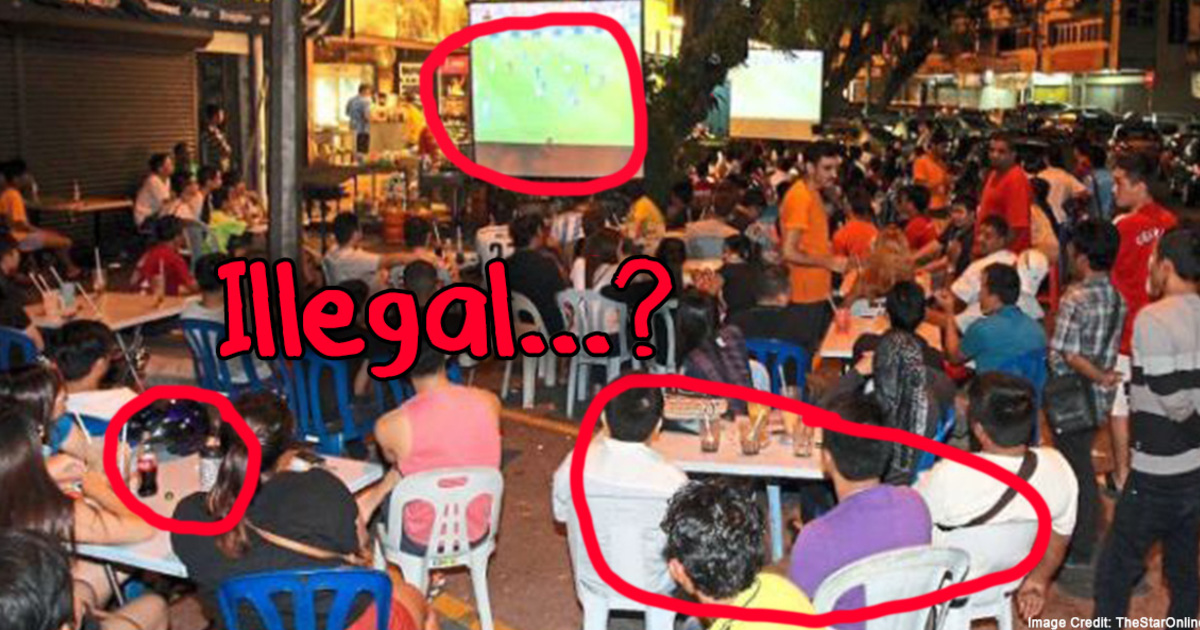 Going to coffee shops is such a big part of Malaysian food culture that it might as well be called a national pastime. Whether it’s mamak shops, hawker centres, or food courts, there’s a place Malaysians like to go and relax with friends over drinks and chit chat.

If that sounds like an innocent activity that shouldn’t get you in trouble with the law, you might want to think again. Some things that people do all the time in the mamak are actually illegal.

Not many people get into real trouble with these laws though, unless something really goes out of hand. Usually these people stand out a lot. You know, the ones with behaviour that might make you stop and look at them dirty for a few seconds…

In any case, here are some laws that you might want to know if you run into the rare but troublesome people at coffee shops.

1. Making a lot of noise

The shop is crowded as usual, and noisy. Very noisy

But even above all the noise there’s this one fellow who is out of it. He’s so loud he’s almost shouting insulting remarks about the abang mamak because he wasn’t given attention immediately.

You’re a frequent reader of AskLegal, so you know that insulting others can get you in trouble with various laws. But there’s something else he’s got coming for him as well: being a nuisance. This will usually only apply in extreme cases, but if you have someone causing injuries, danger, or annoyance to others, at least you know you can get the police to help you.

“operates… any gramophone or wireless loud speaker or any other instrument whatsoever for the production of noise or music in such a manner as to cause annoyance or inconvenience to occupants of any premises in the vicinity,”

There’s more to making excessive noise than just obnoxious shouting. Have you ever had this guy play his music loudly in public instead of listening on his earphones? Well, this is the law you could use to stop him.

Since it’s a minor offence, the offender gets slapped with a RM100 fine. But pity our ears, right?

The law on this is very lengthy and covers a lot of situations, but basically it makes it illegal to litter or dump waste material improperly.

A big issue in many places in Malaysia. And especially rampant around food outlets. Many Malaysians understand littering to be a moral wrong, but did you know that it is an actual crime in our country?

Offenders can be arrested by the police without a warrant. But it’s not that easy for the police to enforce this law without the manpower to patrol every street looking for litterbugs, which is why some people think it’s more of an awareness and attitude problem than one of legal enforcement.

If you grew up being taught that people litter because there are not enough rubbish bins though, consider the case of Japan, where you may need to walk for kilometres without a bin in sight, but the streets are nearly spotless. This writer experienced that it’s normal for people there to carry their trash in their pockets the entire day!

Yep, it’s not just inconsiderate to double park, it could also be a crime to do so. The law for this says that it’s a crime to park a vehicle in such a way that causes danger, obstruction, or inconvenience to other road users.

The local authorities are probably being very nice to double parkers when they come in their truck and ask double parkers to move their cars (they still have to make sure you’re not blocking traffic). According to Section 48(2), the authorities have the right to clamp or even move your car if it’s blocking other road users.

5. Setting up shop in parking lots

“No person shall erect or maintain or permit to be erected or maintained any obstruction in any street, and the local authority may, where any such obstruction exists, take down and remove the same and cost and expenses of so doing may be recovered from the person who erects, maintains or permits the erection or maintenance of such obstruction and shall be recoverable in the manner hereinafter provided.”

(a) builds, erects, sets up or maintains or permits to be built, erected or set up or maintained any wall, fence, rail, post or any accumulation of any substance, or other obstruction, in any public place;

This law applies to the shops themselves rather than their customers. Some food spots practice putting out extra tables and chairs for customers out on the roads. A lot of people like dining out in the open; feeling the cool air, enjoying the beautiful starry sky dull cloudy sky… But it’s at the cost of traffic congestion and customer safety. Thing is, there’s actually a law that allows the local council to confiscate the tables and chairs, as well as slap fines on the business.

You might not get into trouble for being a customer, but you might have to prepare for the local council taking away your tables and chairs...

The Subang Jaya Municipal Council deputy president, Abdullah Marjunid has commented before that the council issues a compound of RM250 to offending restaurants, which is different from the fine amounts in the SDB. The fine probably differs depending on the local council, but if you have more information, please let us know.

spits in any coffee shop, eating house, school premises or public place or in any trolley-bus, omnibus, railway carriage or other public conveyance or in or near any public road… shall be liable to a fine”

After that mouthful of confusing law, you might feel like spitting it all out. But unless you’re the type that spits all over the place, you’re safe from this next law.

It happens way too often and they sometimes spit way too close to you, so here’s the law that makes public spitting illegal. It’s illegal to spit in any public place, public transportation, or near public roads. This law also explains that it is okay to spit into sinks or drains.

7. Being drunk in public

“Any person who is found drunk and incapable of taking care of himself, or is guilty of any riotous, disorderly or indecent behaviour… in any public place… shall be liable…”

If you like to frequent coffee shops that serve alcohol, you might want to know that simply being drunk in public could be illegal. To be clear, it’s okay to stay on the premises if you’re drunk, but don’t go out wandering on the streets - get a friend to take you home.

If you’re found in a public place drunk or misbehaving, you could get scooped up under this law. It’s not a big fine, but the jail time is probably not worth risking.

Enjoying yourself shouldn’t come with causing problems for others

So those were a few “perfectly normal” things at coffee shops that you didn’t know were illegal. Most Malaysians will not run into problems with these laws at all because as you can see, they only cover situations where others are given trouble and problems to deal with.

We’re pretty sure that Malaysians don’t want others ruining our own relax time. But hey, the next time someone causes these kinds of trouble, you know who to call...