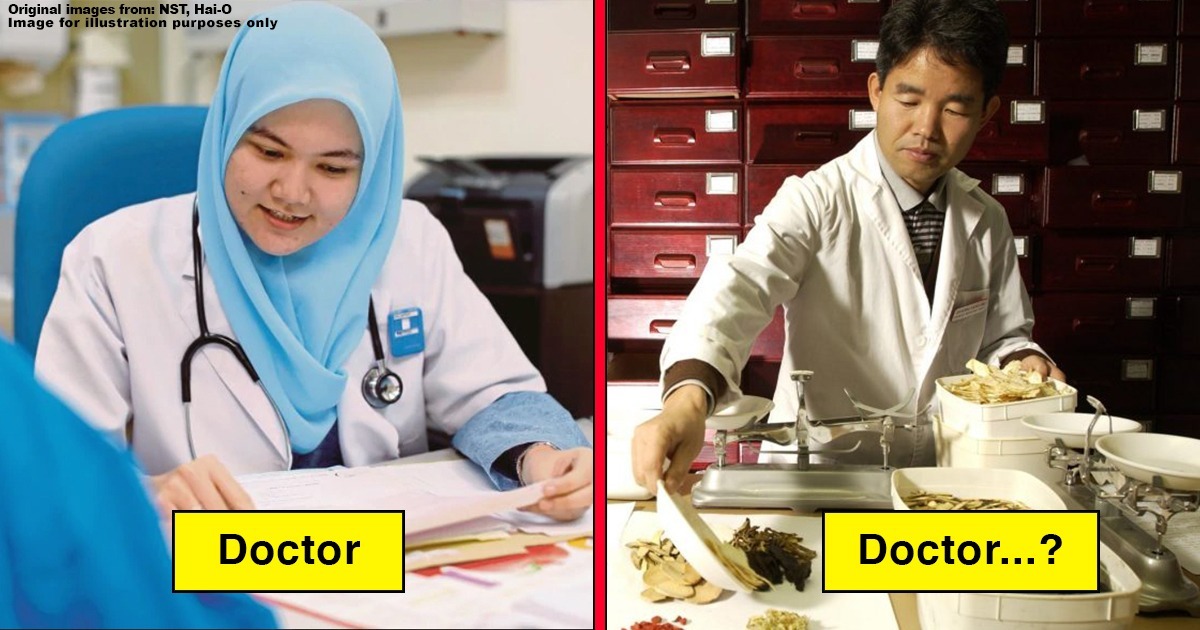 Do you need a medical license to call yourself a “doctor” in Malaysia?

over 2 years ago JS Lim

Everyone knows that the people you see when you get sick are called “doctors”. Sure, we call people with Phds “doctors” as well, but we don’t go to them to get treated. But we’re not concerned with PhDs. What we’re looking for is the distinction on what it takes to be a Dr (MD), the one that practices medicine and gives you MCs when you’re sick.

However, since we’re Asians, it’s ingrained in us to look for alternatives such as traditional medicine specialist for herbal remedies and traditional treatments. Some of us might even trust them more than a regular doctor. So the question is: Is it legal for traditional medical practitioners to call themselves “doctors”?

What you need to know is that both experts in modern medicine and traditional medicine have to be legally registered to practice, although they are allowed to use different titles under law.

Only doctors qualified to practice modern medicine can be called “doctors”

A person who calls themselves “doctor” must be qualified and duly registered under the Medical Act 1971 with qualifications recognized by the Malaysian Medical Council. There’s even a list of the exact medical degrees from universities all over the world that Malaysia recognizes, but even unlisted degrees can be approved separately by the Council.

Under Section 33 of the Medical Act, it is illegal for anyone who is not registered as a doctor to:

The penalty for doing so is a fine of up to RM2,000 for first offences, and up to RM5,000 and/or up to 2 years of jail for repeat offences. If the offence continues over a period of time, there’s an additional RM50 per day fine on top of that.

[READ MORE - If your doctor has no license in Malaysia, here's what you can do]

How do you tell if your doctor is really a doctor?

Short of contacting the Malaysian Medical Council and checking with their registry, how do you tell if your doctor is legit?

Doctors are referred to generally as “medical practitioners” in the law, and are required by Rule 33 of the Medical Regulations 2017 to state their practitioner registration number on all prescriptions, documents, and records relating to their practice. Failing to do so can result in disciplinary action from the Council.

Other than checking on the documents mentioned, looking out for their framed up medical degree is another way to “check” since a recognized degree is one of the requirements for doctors to get their license.

That covers modern medical doctors, but traditional medicine practitioners have to be registered as well.

Traditional medicine practitioners are recognized medical providers in Malaysia despite the existence of modern medicine. As stated in Section 34 of the Medical Act, these are those who practise:

“...systems of therapeutics according to purely Malay, Chinese, Indian or other native methods...”

Fun fact - One special exception that traditional practitioners are not allowed to treat is diseases of the human eye, which is stated in Section 34(2) - only certified “doctors” are allowed to. Don’t worry though, your spectacle shops are not doing anything illegal as testing your eyes and providing spectacles are exempted from this.

Be wary of quack doctors who promise miracle cures

This is where some quack doctors have gone around claiming strange concoctions and possibly illegal supplements will cure diseases of all sorts, like this tragic incident of a woman whose death might have been quickened by the quack doctor’s “treatments”. She had been offered chlorophyll water and bottles of supplements with labels that were either blacked out with marker pen or homemade, eventually leading to her death.

[READ MORE - How do I know if medicine and cosmetics in Malaysia are safe to use?]

There are a lot of drugs out there which hide under the name of “traditional” and “herbal” medicine by mixing real traditional and herbal medicine with illegal drugs - so it pays to be careful when dealing with any product out there. It’s a lot safer to get your medicine from legal healthcare providers (your reputable doctors, traditional practitioners, and pharmacists), as they are legally obligated to make sure they don’t stock illegal medicine, which could end up harming you.