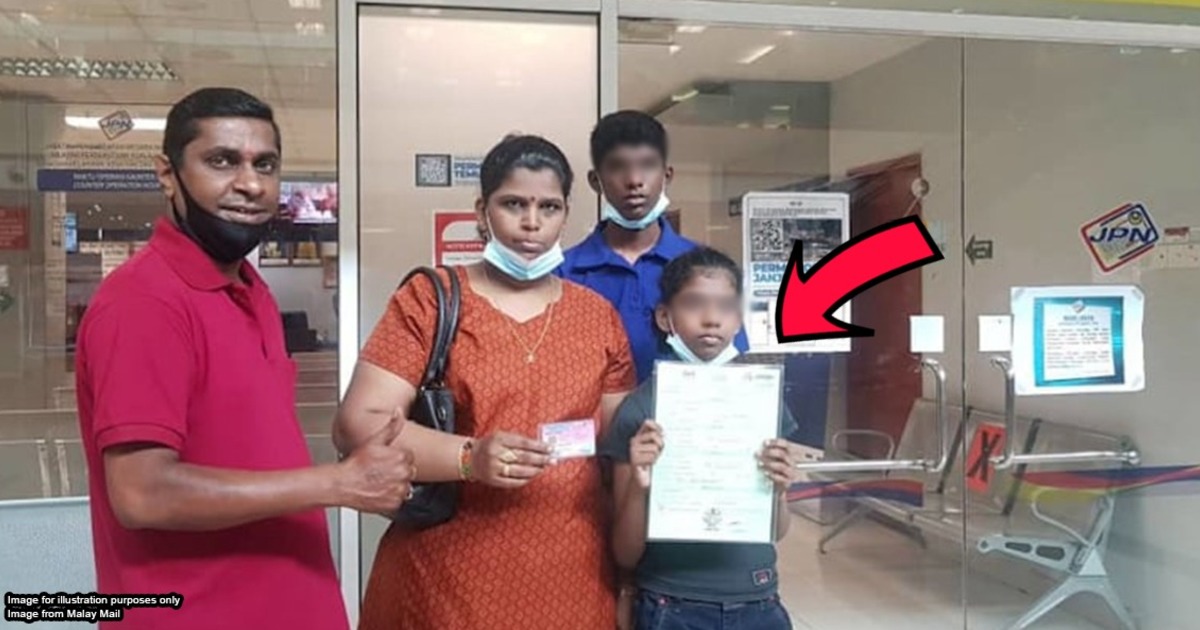 While most of us were very likely born in hospitals, it’s not uncommon for babies in Malaysia to also be born at home. Regardless of where a baby is born, you would think that as long as they are born in Malaysia to at least one Malaysian parent, they would naturally get Malaysian citizenship. But as we’re about to find out today, this isn’t always the case.

This story is of Karthiyani, a girl who was born here to Malaysian parents, but was still denied citizenship. Karthiyani’s story, though, is just one of many children who have not gotten Malaysian citizenship despite being born in Malaysia.

We previously wrote an article of a 6 year old who sued the government because he was not given citizenship, when his birth father and adoptive parents all had Malaysian citizenship. The facts of that case is different from the one we’re looking at today, but essentially they say the same thing: just because a child is born in Malaysia, it doesn’t mean they are automatically given citizenship.

JPN needed more proof that she was born here

Karthiyani comes from a big family, as she is the 8th of 11 children. Unlike her siblings who were all born in a hospital, she was the only born at home. According to Latheefa Koya— the lawyer who later took up this case—Karthiyani’s mother couldn’t make it to the hospital on time, and that’s why she was born at home.

She was born in 2010, and on the same day she was born, she and her mother were taken to Hospital Kuala Lumpur (HKL). They were admitted there for 3 days, just to make sure everything was alright with the mother and child. When they were discharged from the hospital, HKL gave them a letter verifying that the baby was indeed born at home and was later brought to the hospital. Karthiyani’s parents also lodged a police report to confirm her birth at home.

Together with the letter from HKL and the police report, they made their way to a Jabatan Pendaftaran Negara (JPN) branch to register Karthiyani’s birth. As you already know, JPN rejected the application then. But the reason was that they couldn’t verify that she was born at home. In fact, it was also said that they weren’t sure where Karthiyani had come from, as she wasn’t born at a hospital.

She got her citizenship 10 years later

Because Karthiyani was not given citizenship at that point, she did not get a birth certificate. Not having a birth certificate or a MyKad would prevent a person from doing a lot of things, as they would be ‘undocumented’. So for Karthiyani, she could not go to school when she turned 7—which was in 2017.

In 2018, Karthiyani’s family made a new application to JPN. This time, JPN didn’t reject it but they asked for more proof of her birth, such as extra documentation and witnesses. In 2019, JPN was more specific with the proof that they needed—the letter that HKL had initially given, as well as 5 witnesses. These 5 witnesses were Karthiyani’s mother, her neighbours, as well as Mr. Shanmugam, the president of an NGO known as Malaysian Tamilan Today. This NGO had also actively fought for Karthiyani’s case. Unfortunately, Karthiyani’s father actually passed away during this time.

While these witnesses were interviewed by JPN in December 2019, Karthiyani herself was also interviewed by them a month prior to that. Things were finally looking good for Karthiyani. After the interview sessions at the end of 2019, Karthiyani’s plight came to an end when JPN finally accepted the evidence given. On August 5th 2020, JPN issued a birth certificate as well as a MyKid (MyKad for kids, basically) to Karthiyani. This meant that Karthiyani would finally be able to go to school with her siblings and live like a normal Malaysian.

How does one actually get Malaysian citizenship?

There are just two main ways to get citizenship:

Citizenship by registration means the child fulfills the legal requirements under the law to become a citizen, and so the only thing is left is for the parents to register the birth with JPN. On the other hand, citizenship by naturalisation is usually given to someone who has lived in Malaysia for a certain amount of years and fulfills the criteria set by the government. Once they receive Malaysian citizenship, any citizenship they have in other countries will be cancelled, as Malaysia doesn’t recognise dual citizenship.

We won’t go into citizenship laws in detail and list every single requirement/criteria needed, as these are complex. But if you’re interested to know more, you can find all of these in Articles 14-31 of the Federal Constitution.

So in Karthiyani’s case, she would naturally have qualified for citizenship by registration. But as we know, this wasn’t the case. This doesn’t mean that every child born at home will not get a birth certificate easily. It’s just that for Karthiyani, the authorities needed wanted even more proof of where she was born.