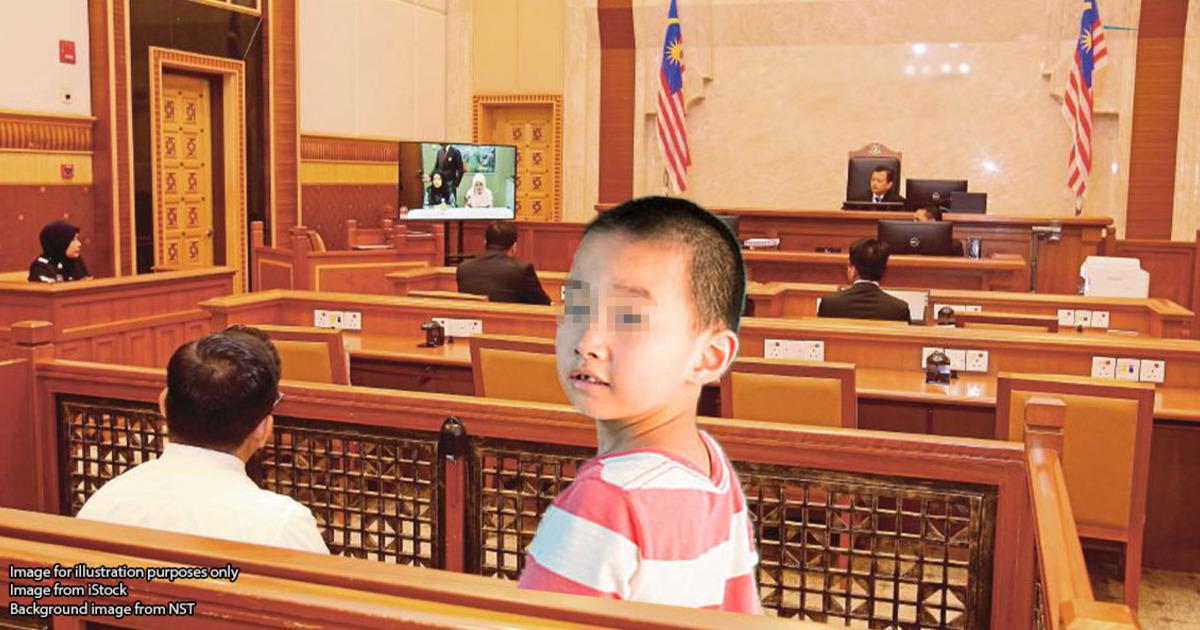 The Malaysian government was sued by a 6 year old in 2014. Here's what happened

almost 4 years ago Mikaela A

(Update on 27/09/2019: After an 11 year wait, Yu Sheng Meng finally received a letter approving his citizenship from the Home Ministry.

Yu was granted his citizenship under Article 15A which provides special powers for the federal government to register anyone below 21 years old as a citizen. Follow the twists and turns of Yu’s journey in this article.)

As kids, a lot of us couldn’t wait to grow up and be adults mainly cuz of the million things we get to freely do. But remember when you were a child and everything was just perfect in its own way? Life was so carefree and fun, and no one imposed anything on you. Unlike now, you weren’t legally responsible for anyone or anything (you had no legal capacity). A child has no idea how the law works, let alone on what the law IS.

[READ MORE: Can a child sue or be sued?]

But today we’ll tell you about a 6-year-old who actually sued someone… and not just anyone but the Government of Malaysia! The case of this young boy is known as YSM v Ketua Pengarah Pendaftaran Negara and it’s a pretty complicated story, but we’ll do our best to relate it to you in the best possible way.

He was born in Malaysia, but he isn’t a Malaysian…

As mentioned, the case is called YSM v Ketua Pengarah Pendaftaran Negara. For those of you who don’t know how case citations work, YSM is the boy in question and the other party is the National Registration Department, or JPN as we know it. Therefore, the case is between the boy and JPN. YSM is an abbreviation of the boy’s actual name and at the request of his lawyers, in this article we will refer to YSM as Kevin and to his adoptive father as Paul.

It all started when Kevin was born in 2008 in Penang to a Malaysian father and Indonesian mother (the two of them unmarried), and this was stated in his birth certificate. Shortly after for reasons unknown, his parents decided to give him up for adoption. So when Kevin was four months old, a man named Paul adopted Kevin and a new birth certificate was issued to him.

The trouble started when Paul realised that in the birth certificate, it was stated that Kevin was a permanent resident instead of a citizen. For Paul and Kevin, this was really bad news, because if Kevin didn’t get his citizenship, he would be considered to be a stateless child. In this case, the PR cannot be converted to a citizenship, which means that other than being legally allowed to live here, he would not be given any other proper identification documents.

For example, not getting a Malaysian IC or passport would mean that he would not be able to legally own anything nor can he leave the country. He would also not be able to get formal education in any recognized institution. But perhaps the most harrowing one of all would be that he would belong to NO country. Legally, he would have no place to call home.

For many, their nationality is a part of their identity and belonging to a particular country gives someone certain rights and privileges. If Kevin was going to be stateless for the rest of his life, it was going to an incredibly tough journey ahead. And so, Paul knew that he couldn’t just let things be. Seeing that he needed some other way out of this mess, he did what any sensible person would do…

But wait a minute… if the case was between Kevin and JPN, why was Paul suing on his behalf? Obviously, it would be impossible for Kevin himself to file a case in court, which is why Paul, an adult who also happened to be a lawyer did so on his behalf. But throughout the case, whatever the court said was directed at Kevin himself and not towards Paul. So it’s definitely not clickbait when we said that it was a 6-year-old who sued the government...

The case began at the High Court and by then, it was 2014 and Kevin was six years old. They might have gone to court hoping to get a remedy to their problem but once again, this family received bad news.

Remember that we said that Kevin’s birth parents were unmarried? Well, this was the root of the problem. The High Court said that because Kevin was born to unmarried parents, he was an illegitimate child. Section 17, Schedule 2, Part III of the Federal Constitution says that one of the criteria to get Malaysian citizenship is that the person must be born to a married couple. If the child was illegitimate, he or she would take on the citizenship of the birth mother.

“For the purpose of Part III of this Constitution references to a person’s father or to his parent, or to one of this parents, are in relation to a person who is illegitimate to be construed as references to his mother...”

This could not apply in Kevin's case because his birth parents weren’t married and also because his mother was no longer in the picture.

But, why did their marital status matter when now, Kevin had already been adopted by Paul and was legally Paul’s child? To most of us, this argument would be a sound one and we probably would say that Kevin should get Malaysian citizenship as he’s now been adopted by a Malaysian. In fact, this was the argument used by Kevin’s lawyers but the Court said that the adoption had no effect on Kevin’s citizenship.

In the Federal Constitution, the meaning of “parent” was strictly limited to birth parents only and not adoptive parents. So, Paul’s marital status or the fact that he was a Malaysian didn’t matter at all. The court said that none of that could change the fact that Kevin was born to unmarried parents.

...the Adoption Act 1952 (Act 257) relates to the right and control an adopted father has over his adopted child. However, the adoption order does not at all confer the status of citizenship on the plaintiff. This is due to the fact that there is a specific law, the FC, which deals with the issue concerning citizenship so any matters concerning citizenship should be read and construed within the four corners of the FC. The power relating to citizenship must therefore be vested to the federal government and Minister of Home Affairs...

So the courts put their foot down and said that the adoption was no reason to give Kevin citizenship. But here’s another bit of drama to the story: even before the court case began…

What Kevin and Paul were going through was bad enough, but after finally making it to court, the High Court actually said that this matter wasn’t for them to decide on. Paul was told that bringing the case to court at that point was an abuse of process of the court. But this is not because the court wanted to be mean or because it just didn’t feel like hearing the case. The issue was that, the court didn’t have the expertise to hear matters on citizenship. The court said that the government is better equipped to decide on them. This is because it is the government that has access to information and records pertaining to a person which the courts would naturally not have.

Think of it this way:

If you have an Acer laptop that needs to be repaired, you could technically still take it to a shop that repairs Dell laptops. While your laptop might be successfully repaired, you probably would have gotten a better job done in an Acer repair centre because Acer would have better knowledge on how Acer laptops work compared to Dell.

So, if the government was the one who could decide on Kevin’s case and it was them who had denied him citizenship, did this mean that there was no recourse for him? The judge said that if the government rejects an application for citizenship, the aggrieved party can appeal this decision to the Minister of Home Affairs. However, once the Minister has made his decision, that decision is final and it cannot be appealed.

While reading up on Kevin’s case and judgment, we noted that there was no appeal made to the Minister with regard to JPN’s decision. Instead, Paul and Kevin had gone straight to the court. Had they won the case when they took it to court, it would have been great news for other cases such as Kevin’s. If the law was changed because of how Kevin’s case was decided, that would have set a new yardstick or criteria for how cases on stateless children would be decided.

Have things changed for Kevin?

If not getting citizenship is upsetting enough, after having his application rejected twice, Kevin also had to pay damages to JPN on two occasions: RM1,000 for the first time and RM4,000 for the second. And unfortunately, while the case was still being heard in 2016, Paul passed away after battling with leukemia. Thankfully, his legal firm partner, Mr. Tan adopted Kevin and continued to pursue the matter for him. It has been 3 years since the High Court’s decision, but the battle isn’t over.

Eager to know if Kevin will have another chance at fighting his case, we contacted his lawyers for some updates on the case. They informed us that the Court of Appeal is set to hear the case once more at the end of April 2019. Based on the Court of Appeal’s verdict, a decision will be made as to whether the case should be taken to the Federal Court next or not.

UPDATE: So the Court of Appeal heard the case on the 25th of April 2019, but they have given Kevin and his lawyers as well as JPN and their lawyers some more time to come to an agreement on the issue among themselves. The parties are supposed to update the court on the outcome of their meeting and status of their agreement when they meet again on 20th June 2019.

There are many more Kevins in Malaysia

Kevin’s case isn’t a rare one and many similar cases have been given the same reasons when the case is taken to court. A few weeks ago, a case like Kevin’s made headlines. Rachel Sia, a 19-year-old Sarawakian is also a stateless person despite being born in Malaysia. The main difference between Rachel’s case and Kevin’s is that Rachel was adopted by a married couple, unlike Kevin who was adopted by a single man. Again, this did not make a difference to Rachel’s legitimacy because no one could prove that her birth parents were married. And because of that, she is deemed illegitimate and till date does not have a Malaysian IC and passport and so, she cannot travel out of Sarawak.

As a contrasting example, we have the case of MJA v AL. The facts of this case are also almost similar to Kevin’s but the only difference is that she was raised by her biological parents and was never given up for adoption. At first, she was said to be illegitimate because at the time of her birth, her parents were not married. However, her appeal for citizenship was allowed because although her parents were unmarried at the time of her birth, they subsequently got married and so, she was not deemed to be an illegitimate child anymore.