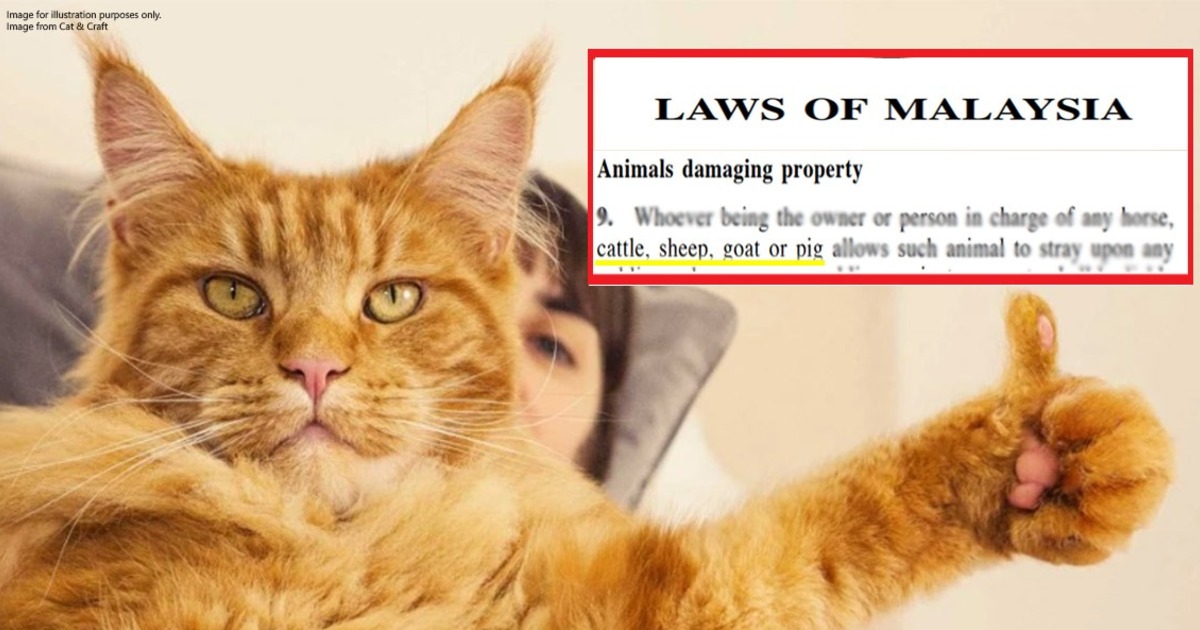 You can't fine a cat owner in Malaysia because...there are no laws against cats

There are basically two common types of animals that are kept as pets – dogs and cats. However, there are more than just 2 types of laws that we have here in Malaysia. Some laws are rather straightforward, while others tend to be just plain...weird.

Previously, we wrote an article on some of the weirdest Malaysian laws that we’ve come across – as funny as this may sound, it is actually true and most of them can be found in the Minor Offences Act 1955. If you briefly checked out the Act, you’d find some pretty strange laws that were included in it, such as riding an elephant down the street or driving a pig to a public road is an offence. Perhaps, this has something to do with the fact that this law is pretty old and has never been updated since 1955.

So, while we were looking at the Act, we realised something strange. There are laws mentioned in the Act for cattles, horses, pigs and even dogs for offences such as property damage and harming anohter person. But...there were actually no laws on cats!

It’s because cats are useless (sorry)

So to briefly explain what the Minor Offences Act 1955 is about, it specifies punishments for small crimes. And the specific part we’re looking at here is Section 9 of the Act that states as such:

“Whoever being the owner or person in charge of any horse, cattle, sheep, goat or pig allows such animal to stray upon any public road or upon any public or private property shall be liable to a fine not exceeding one hundred ringgit in respect of each animal...”

Basically, the Act states that any damage done by horses, cattle, sheep, goats or pigs on public/private property will be asked to pay a fine not more than RM100, or whatever the amount the judge in court considers fit.

As we mentioned earlier, the Act has laws for dogs. But not just one Section, but three:

Section 6: Dog running at a person – If the dog chases after a person, vehicle or other animal.
Section 7: The responsibilities of a dog owner – If the dog causes harm to a person or damages property.
Section 8: Letting the dog loose to attack or scare someone.

[READ MORE: If your dog bites a robber in Malaysia, can you get sued or taken to jail?]

With all these laws on dogs, there were none on the other most popular domestic animal – cats. So the question now is, if it doesn’t exist in the law, does this mean cats (and its owner) are immune from any laws?

Perhaps this will be understood best with an explanation given to us by lawyer Fahri Azzat. Here’s what he had to say:

I think cats were generally left out (from the Act) because they aren't exactly beasts of burden or beasts of hunt. They were kept purely for pleasure (and perhaps a bit of rat check). So little direct law is applicable to them. – Fahri Azzat via an email reply.

In other words, it might have something to do with what cats are used for. Since they are mostly domestic animals, and do not really serve any purr-pose besides looking cute – they were not classified in the Act due to their lack of commercial use.

So, does this really mean cats are free from any legal responsibilities, and you will have to start worshiping them from now?

Not really, you can actually still sue the cat owner

To be much more precise, you can still sue a cat owner for property damage or physical harm caused by the cat. There are many different types of torts, but for cats, here are 2 examples:

Basically, you can still sue a cat owner in these two circumstances. If you’re looking into suing someone for property damage or physical harm caused by his/her cat, here’s what Fahri had to say:

A pet owner is liable for the damage his pet causes in tort under common law. So he can be sued in the civil courts for property damage caused by his cat. – Fahri Azzat, lawyer

There have been extreme cases of people poisoning their neighbour’s pets. If you think hurting the animal might stop it from coming into your compound, you will be held responsible under the Animal Welfare Act 2015.

The Act basically regulates all activities involving animals via the Animal Welfare Board. “Animal cruelty” is defined under Section 29 of the Act as follows:

“(1) Any person who—
(f) causes, procures or, being the owner, permits any animal to be confined, conveyed, lifted or carried any animal in such manner or position as to subject such animal to unnecessary pain or suffering;”

So, if you use a trap or poison any cat that finds its way into your compound, you will be classified as an animal abuser under the Act – Offenders will have to pay a fine between RM20,000 and RM100,000 and/or 3 years of imprisonment. In other words, you cannot “punish” the cat in any way as there are laws protecting it from being harmed.

Here’s a bonus point for cat owners: There are a few basic responsibilities that you can take when it comes to making sure your cat does not become a nuisance to your neighbours – like keeping your cat(s) under proper supervision when letting it out and training your cat(s).

Also, sometimes it’s best to just close an eye when your neighbour’s cat comes into your compound. Keep your windows, doors and gates locked to avoid stray cats from getting inside of your compound – If you hurt the stray cat in any way, you will still be offending the Animal Welfare Act.

But, if your shoerack gets wrecked or your neighbour’s little furry friend attacks you with the claws of Hades, do not hesitate to take a meow-ment to talk to your neighbour about it.