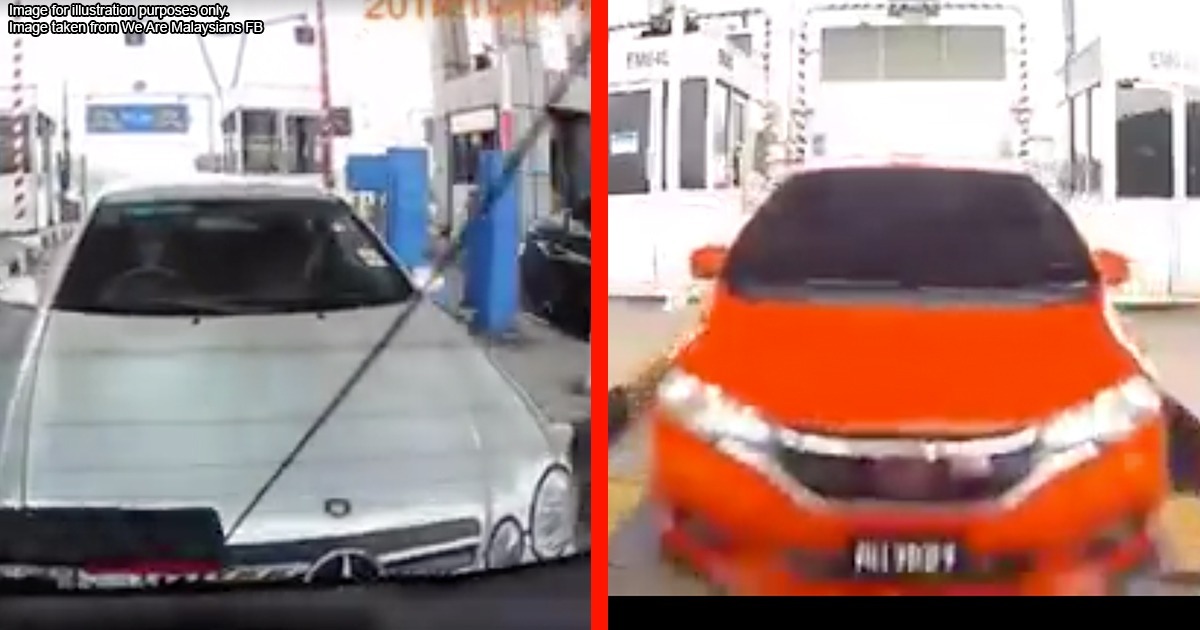 Is it a crime to tailgate someone at the toll in Malaysia?

We know all of you have been complaining about the latest social faux pas to hit our shores: the toll tailgaters. Naturally, we have to jump on the bandwagon as well. Now, when you’re watching videos of such tailgaters or perhaps, if you’ve had the misfortune of having one of them tail you, the first question that pops through your mind is: isn’t it illegal for them to do this?

This question is of course followed by a stream of words that we can’t publish before the next question comes in – so be it if he doesn’t pay the toll, but what happens if he hits my car?

[READ MORE: If you get into an accident with a police car in Malaysia, are you automatically wrong?]

But first, let’s deal with what happens if he hits you, because we all know what you’re thinking about: if you get hit from the back, it’s automatically their fault. Well…

This might be surprising, but old time readers of Asklegal may vaguely recall that we’ve debunked this legal myth wayyyy back in 2017.

The starting point is this: Section 22 of the Malaysian Highway Code states that it is your fault if you collide with the car in front of you because you failed to maintain a distance of at least one car space at all times. The Act says something like this:

“If you collide with the rear of a vehicle in front, it is your fault, because it means you have been following it too closely. Allow at least one cars length between you and the vehicle in front for every 10 mph (~15 kmh) of your speed for reaction and stopping time...”

However, this is not conclusive proof of fault in all cases. It’s just a presumption that the law makes. If you don’t think it’s your fault you collided with the car in front because he braked suddenly, was driving recklessly, or any other factors that caused it, you must provide the evidence to the police while they are carrying out their investigations.

From this, the judge will then decide who is liable in that particular accident: It can either be 100% your fault or the court can apportion liability. This means that the judge would decide that both parties in the crash were negligent, and will then split the liability on any percentage he sees fit:

So for instance, it would mean that you would pay 70% of the damages while the other guy you hit would pay for 30% if the judge decides on negligence.

[READ MORE: If you hit a car from behind in Malaysia, is it automatically your fault?]

But in the toll gate scenario we would agree that in most circumstances, liability would be clear cut — the guy tailgating you and skipping the toll would be 100% at fault. However, if you choose to brake and “teach him a lesson” (we know some of you thought of it), then it may actually be partly your cross to bear.

In other words, if you try to be Batman and impose vigilante justice, you might end up paying for it yourself. The best things to do in such situations is to focus on your own safety, note down the perpetrator’s car model and plate number, and report him to the police.

After all, if you slam on your brakes, you never know if he would just commit a hit and run and then you would truly be wallowing in your vigilantism (and debt).

Now, on to the meat of the matter: is skipping out on tolls illegal?

Here’s the thing: it’s not illegal for the way you think it is—i.e the failure to pay, but it is illegal for a whole host of other things.

[READ MORE: 5 things you can claim if you get into a traffic accident in Malaysia]

First and foremost, the Road Traffic Act 1987 makes it an offence for anyone to drive in a reckless and dangerous or careless and inconsiderate manner under Sections 42 and 43 respectively. If you’re a first time offender, you can be jailed for up to five years and/or pay up to RM15,000 in fines. It wouldn’t be that far of a leap to see how driving like a demon at tolls can be construed as driving in a reckless manner that disregards other road users.

There is also a similar provision under Section 279 of the Penal Code, where rash driving that could likely cause harm to others is a criminal offence, that is punishable with up to six months in jail and/or up to a RM2,000 fine.

Further to that, such drivers may even be considered as a public nuisance under Section 268 of the Penal Code.

The moral of the story here is…

Don’t be that guy

We know that paying for tolls can take a hefty portion out of your monthly budget, but driving in a reckless manner is not the way to cut costs. Aside from rear ending someone and paying for the damage there, you could be charged for a multitude of offences. To add salt to that wound, imagine if you hit the toll gate instead; we cringe to think of the thousands you would have to fork out to then.

If you are on the other end of the spectrum and want to guard against drivers like these, the only advice we can give you is to always be aware of your surroundings when driving.

The often overlooked mirror when driving is the rearview and it would do you good to intermittently check it. Aside from that, invest in a dashcam and try to mark down the plates of such drivers so that the authorities can take the necessary action.