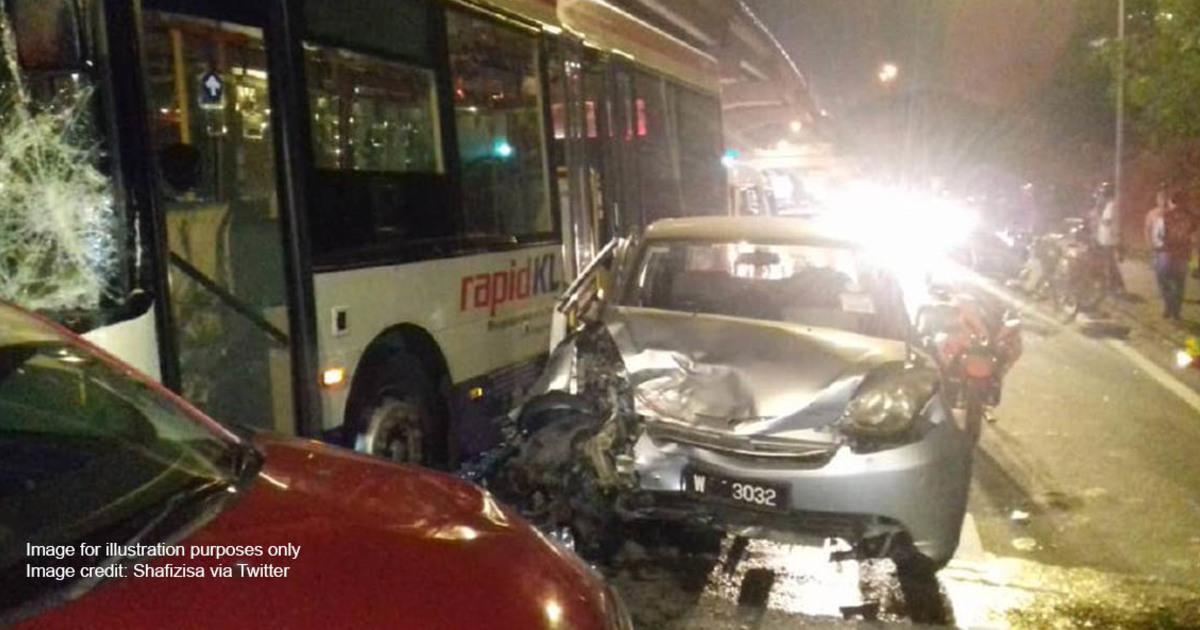 Usually when an accident happens, you’d end up doing one of two things – either making a police report and filing an insurance claim, or settling privately with the other driver. However, these usually only apply when the damage is to the car itself. If other circumstances come into play – say if you were injured and unable to work, then you might have to take the case to court.

So let’s say you were involved in such a scenario, and the court actually agrees with your side of the story and it is the other guy’s fault. You want some money because he has caused you some losses. So, what can expenses can you legally claim?

Before we go to the 5 things you can claim, it should be worth knowing that you can only legally claim those expenses which was directly caused by the accident. So, let’s say the accident damaged your car, but your car radio is working fine, you cannot later claim for a new Kenwood radio.

We’ve also updated this article with answers to some questions regarding the recent RapidKL incident, where a bus hit a number of vehicles along Jalan Ampang while being chased by motorcyclists.

So back to the main point, the things you can legally claim are as such...

In addition to claiming medical expenses in a government/private hospital, you actually can claim for expenses incurred from receiving traditional medicine treatment. The case of Seah Yit Chen v Singapore Bus Company(1978), concerned an accident victim who sought traditional medical treatment. When deciding if the victim could claim such expenses, the court stated that traditional medicine can be claimed provided that it was sought upon reasonable advice. So for example, if your medical doctor told you that you can go for acupuncture to cure the sore muscles from an accident, the court would probably allow you to claim it.

Let’s say your accident has left you in a condition where it is difficult to take care of yourself. You may need someone to take of care of you, and you may also need some degree of supervision.

To claim for cost of care, you have to show that cost of care is required as decided in the case of Yang Salbiah & Anor v Jamil Bin Harun(1981). In this case, the victim was left in a vegetative state after a bus accident. The court required that the victim show evidence that she needed nursing care. So let’s say you broke your pinky in a car accident and you hired a nurse to look after you, you probably would not be able to claim cost of care. However if you are paralyzed from the waist down, you probably have a proper chance of being awarded cost of care.

So, let’s say you didn’t hire a nurse or a caretaker. Let’s say you have a family member willing to look after you instead for free, can you still claim since you are not spending a single cent? The answer is yes! In the case of Housecroft v Burnett(1986), the court actually allowed a wife to claim money for the care provided by her husband. How would the court quantify such an amount? They decided to use the market value of such care.

The next question now would be, how long can you claim for cost of care? So let’s say you need 5 years to recover, you can claim the cost of care 5 years. However in situations where someone needs care for the rest of his life, reference should be made to the case of Bujang Bin Mat v Lai Tzen Hai(2004). In this case, a formula was given by the court as follows:

So, if let’s say the court decides your life expectancy is 70 and you were 40 during the accident, you can claim cost of care for the following years:

As mentioned earlier, sometimes an accident may result in an injury so serious that you cannot work for sometime, or forever. You need a salary to survive, so can you claim money for the damages? The answer is yes, but there are certain conditions to satisfy.

First, as stated in Section 28A of the Civil Law Act 1956 you must be under 55 years old. Meaning, if you are 56 the claim would fail. In the same section, you have to in good health before the accident. Meaning, you should not have any medical conditions before the accident which would have caused you to lose your job anyways. Finally, the same section says that you must have been receiving earnings by your own labour or gainful activity. Meaning, you cannot be an Ah Long and then claim for the losses of not being able to make money from illegal loans.

So once you have satisfied these 3 requirements, the amount you can claim is of course the salary you have been receiving during the time of the accident. However the case of Tey Chan & Anor v South East Asia Insurance Bhd(1993), stated certain deductions must be made. Here, the court deducted  expenses incurred in earning the income. So let’s say you are earning RM3000/mth, the court will deduct the money you have used for parking, fuel, etc(stuff you spend to go to work and stay at work).

Finally the next important question would be, how many years/months worth of salary can I claim? If your injury caused you to stop work for 2 years, you can claim for those 2 years. But, as mentioned earlier you can have an injury which lasts for a lifetime. In such cases reference must be again made to Section 28A, which says that it would all depend on your age. If you are below the age of 30 at the time of accident, you can claim 16 years worth of salary. However, if you are between the ages of 31 and 54, a formula would apply:

So if let’s say you were 40 during the accident, you can claim for salaries lost for the following number of years:

It is common knowledge that the injuries caused by an accident can actually result in pain. Though it may be tough to quantify pain and suffering, the courts have done it before. In the earlier mentioned case of Yang Salbiah & Anor v Jamal Bin Harun, the court awarded RM70000 to the victim who suffered abrasions, contusions and ended up in a vegetative state. It was also stated in the same case, that you can only claim for pain and suffering while you are conscious. I mean, you can’t feel pain if you are not conscious right?

If you do get into a car accident, there is a 99.99999% chance that your car would get damaged too. Sometimes, like in the case of Motor & General Insurance Sdn Bhd & Ors v Pok Siong Kok & Ors(1988) your insurance may compensate you lesser than expected. In such cases, how would the court quantify such matters? In Pok Siong Kok, the victim’s car suffered a total loss, and the court awarded him with the market value of the car at the time of the accident. To illustrate, let’s say you bought a brand new Axia. 2 years later, you meet with an accident and your car suffered a total loss. The court will award you the price of a 2 year old Axia.

Update based on the recent RapidKL bus incident

We’ve had some readers asking how the incident involving the RapidKL bus would affect damage claims. While we can’t comment specifically on the incident itself (as it’s still being investigated) we’ve included two scenarios to address the questions above – basically what you can do if the vehicle doesn’t belong to the driver that hit you, and what happens if the driver of the vehicle that hit you is unconscious or passes away.

You can get the driver’s boss to pay up

This may not apply in every scenario but, if the vehicle that hit you belongs to a company or someone running a business, you can claim the damages from the company itself.

However, the catch is that you can only do this if the accident occurred while the driver was on duty/working. An example of a scenario where this would be applicable is where there your car gets hit by a delivery van while the van is doing deliveries. The law which allows such a claim is called vicarious liability. The concept allows the boss of a negligent worker to be liable for the carelessness done by the worker during the course of his work.

[READ MORE: If a worker hurts you by accident in Malaysia, do you sue him or his boss?]

Things are again slightly different of you were to be hit by an ambulance or a government vehicle, which we’ve individually covered in the articles below:

[READ MORE: Who do you sue if a police car hits you?]

[READ MORE: Who do you sue if an ambulance hits you?]

You can still make a claim, even if the driver passed away or goes into a coma

While this may bring about questions of morality, respectfulness, or being considerate; these are perhaps best left for the people involved to decide on. From the legal perspective itself, you can actually get compensation from the person who caused the accident even if the above happens. Let’s start off with what happens if the person passes away

According to law, although a person is dead, their estate survives. The estate is basically the properties and rights of the deceased. Under Section 8(1) of the Civil Law Act 1956, you can still take or continue a civil suit against a deceased person. However, there is a time limit – You would have to start suing 6 months after the grant of representation has been extracted. This would be when the court gives someone the legal right to administer the estate. So once you have started the case within the time limit, you can sue the estate as per normal and claim all the things mentioned earlier.

In a situation where someone dies as a result of getting hit, the reverse is also possible:

[READ MORE: If a careless driver killed someone, can the victim's family sue for financial support?]

In the event the person who caused the accident didn’t die but fell into a coma instead, you could still make a claim. While there are several ways this can be resolved, a more common scenario would be that the family may have to appoint a representative (usually also a family member) who will then hire a lawyer on behalf of the comatose driver.

Try not to get into an accident, but if you do...

In essence, we can see that the Malaysian court system is quite fair when it comes to compensating victims of a traffic accident. Victims are clearly able to get compensation for almost all expenses they incur due to the accident. This shows the court’s effort to return victims to the position as if the accident never happened.