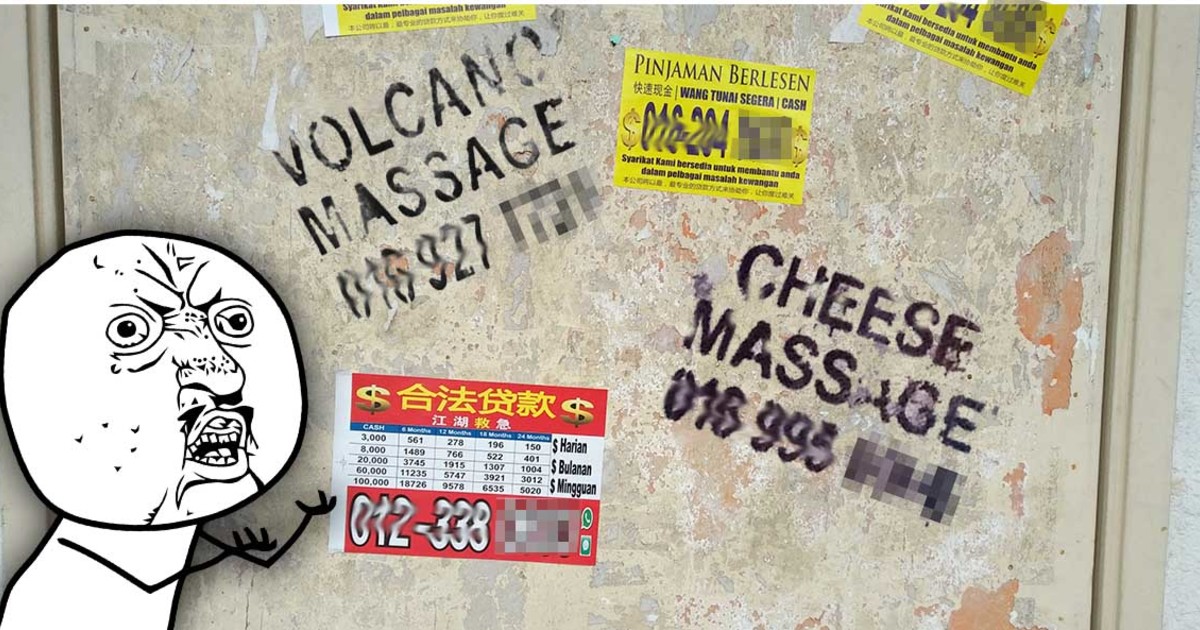 If Ah Long ads are illegal in Malaysia, why do we keep seeing them?

Walking down a Malaysian city street, you might find a lot of good food places, blazing heat, people of all races… and dodgy advertisements plastered over every conceivable public surface.

Unlicensed money lending is illegal, and prostitution is restricted in Malaysia, so those ads are almost certainly illegal, right? Even if the services advertised were legal, they’re still vandalising public property! You might have wondered before: if these ads were illegal, why are there still so many around our cities?

Turns out, these ads about “volcano massages”, “pinjaman berlesen”, and various promotions being this prevalent is more than what the authorities bargained for.

If they’re illegal, why can’t the authorities stop them?

The local authorities are usually the ones stuck with removing these illegal advertisements. But what a lot of people don’t realize is that the sheer amount of ads proves difficult to deal with. To illustrate - Petaling Jaya mayor Datuk Mohd Azizi Moh Zain said 61,044 illegal ads were removed from the city from 1st January to 31st July 2017. The situation is even worse in Kuala Lumpur, where 1.3 million illegal ads were removed in the year 2015.

“Even the cost of printing the materials is cheap, so the offenders do not feel the pinch when the advertisements are removed. They will just reprint and put them up again.” - Datuk Pardip Kumar Kukreja, member of Pemudah (Special Taskforce to Facilitate Businesses), in interview with The Star

So there are laws against putting the ads up, but they’re not that effective at stopping the illegal ads. Then, are there any laws against printing the advertisements so they can be stopped before the ads are put up?

No, not really. But DBKL has been working with the Malaysian Communications and Multimedia Commission (MCMC) to bar the phone numbers displayed on the ads. This helps, but there’s also the fact that these are just dummy numbers.

“I was informed that these mobile numbers are used to screen the callers and the genuine prospects will be contacted from a different line… We have also caught individuals putting up stickers and have fined them. But they are just the ‘small fish’ hired to paste the stickers,” - Datuk Mohd Azizi Mohd Zain, Petaling Jaya mayor in interview with The Star

There’s actually an oddly specific law in Section 11(2) of the Printing Presses and Publications Act 1984, which states that all publications need to have the name and address of the printer and publisher.

The penalty for failing to do so is up to 1 year of jail and/or up to RM5,000 in fines. It’s been used against pirated CDs as well as for arresting the Bersih chairperson, Maria Chin Abdullah because Bersih was handing out leaflets without a name and address.

While that law is one thing you can look out for, the way you go about legalizing your advertisements largely depends upon your local council’s laws. We’re using Kuala Lumpur’s Advertisements (Federal Territory) By-laws 1982 as an example (no online copy available), but it only has effect in KL so check with your local council if you want to put ads up in public spaces.

Some of the requirements under the KL Advertisements by-laws are:

If you plan to put ads up in public places, get them licensed

Technically speaking, it’s not just Ah Long and “volcano massage” ads that are illegal without a license, any kind of signage we put up on the streets for weddings and funerals might be illegal as well without the local council’s permission.

A lot of the illegal ads in KL are put up illegally by private businesses and exhibition organizers. DBKL has stated that they used to send out 2 warning notices before issuing a fine, but because the fine hasn't been effective, they want to revoke business licenses instead. If you’re planning an ad campaign or want to put up signs in public spaces for your visitors, it’s best to make sure everything checks out legally, so make sure to check with your local council and get your ads licensed!