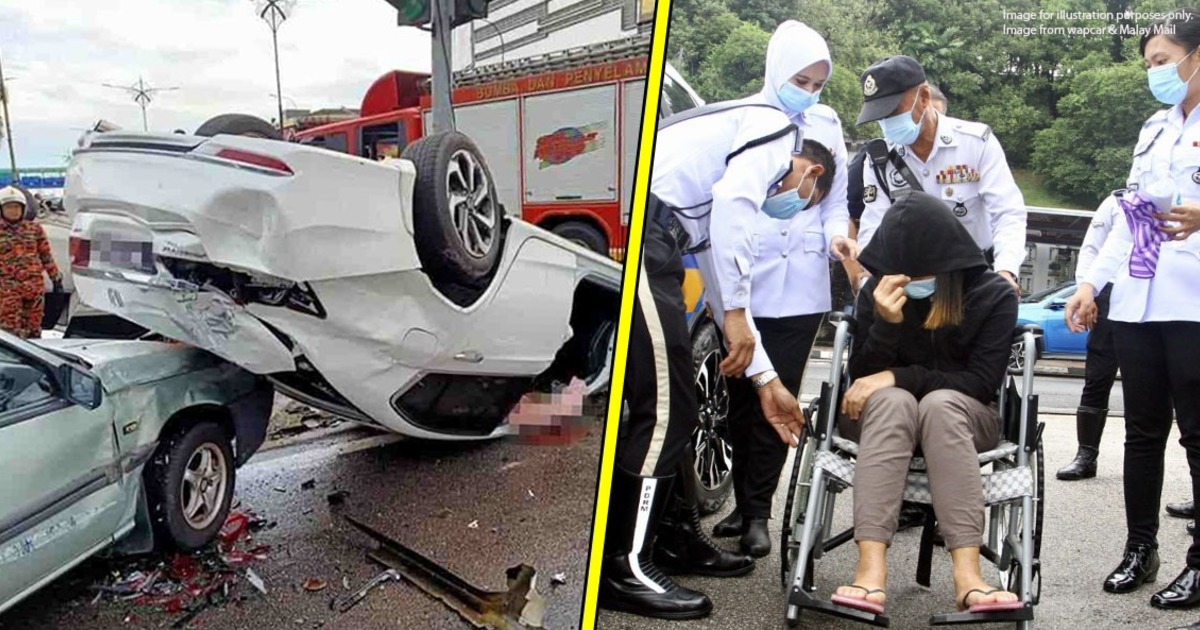 Is drunk driving a bigger crime than driving under drugs in Malaysia? We investigate

Recently, a Malaysian woman who was under the influence of drugs crashed into a navy officer’s car—killing him on the spot. The video of the crash made its rounds on social media, and netizens even shared their thoughts on the possible sentencing the woman should get for the crime.

The court finally decided on her sentence last week—where she was sentenced to six years + seven months’ in jail and fined RM 11,300 at the Johor Bahru Magistrate’s Court. Before we get into the reason behind her sentencing, let’s briefly look at some of the charges made against her at court.

She pled guilty to 4 charges

The woman, Nur Fatin Nasrah pleaded guilty to 4 charges read to her. She was charged under the Road Transport Act 1987 (RTA 1987) for driving under the influence of alcohol/drugs, driving without a license, and driving a car that didn’t have road tax and insurance. She has been given a six-year jail sentence and a fine of RM8,000—and an additional RM3,300 for driving illegally.

Now there have been many questions on why the woman never got a life sentence or a longer jail term—as compared to other offences involving drugs in Malaysia.

So here’s a breakdown on the penalties for each offence committed by the woman which led to her jailtime and fine:

1. Driving under the influence of intoxicating liquor/drugs (Section 44 of the RTA):

A fine up to RM 1,000 or jail term not exceeding three months or both.

[READ MORE: Do motorcycles in Malaysia need insurance to renew their road tax?]

So as you can see from the above, the penalties for the offences committed above don’t exceed RM 20,000, based on the law. But this isn’t the only reason behind her sentencing...

The laws have yet to be amended for a bigger sentence

There’s a 9/10 chance you would have come across posts or memes about how unfair the law is on the sentencing given to the Myvi driver. Most of them were making a comparison between drunk driving and driving under the influence of drugs—specifically pointing out the penalties in the laws. But here’s the thing—Both drunk driving and DUI actually fall under the same law. Section 44 of the RTA states:

“(1) Any person who, when driving a motor vehicle on a road or other public place— (a) is under the influence of intoxicating liquor or drug...and causes the death of or injury to any person shall be guilty of an offence and **shall, on conviction, be punished with imprisonment for a term of not less than three years and not more than ten years and to a fine of not less than eight thousand ringgit and not more than twenty thousand ringgit.”

The law states that the fine will be between RM 8,000 and RM 20,000 and the jail term will be less than 10 years. Which is basically how the Myvi driver was sentenced to the punishments which some people might deem as not enough.

This brings us to an update which was further confirmed by the current transport minister, to clarify the penalties given to the Myvi driver. The punishment for DUI will be increased, as the RTA has just been amended and passed in the Dewan Negara sometime last month—which is why it is yet to become the law and is still only considered a Bill.

Any proposals to introduce or change (amend) a law has to go through the Parliament, the Senate, and the Agong before it can be accepted. A Bill is basically the proposal to introduce a new law or make changes to an existing one. And this process is pretty lengthy as it involves extensive discussion and negotiation among the parties who have an interest on the Bill, and those who will be affected by it—such as the government, NGOs, public interest groups and so on.

It takes 30 days to get the Royal Assent in order for a Bill to become part of the law. And in this case, as the Bill was only passed last month, the effect of it becoming the law has yet to happen but will...soon.

“No person shall be punished for an act or omission which was not punishable by law when it was done or made, and no person shall suffer greater punishment for an offence than was prescribed by law at the time it was committed.”

So at this point, the Myvi driver has been sentenced to the offence based on the current laws. However, there is a chance for the Deputy Public Prosecutor (DPP) to appeal for a higher sentencing.