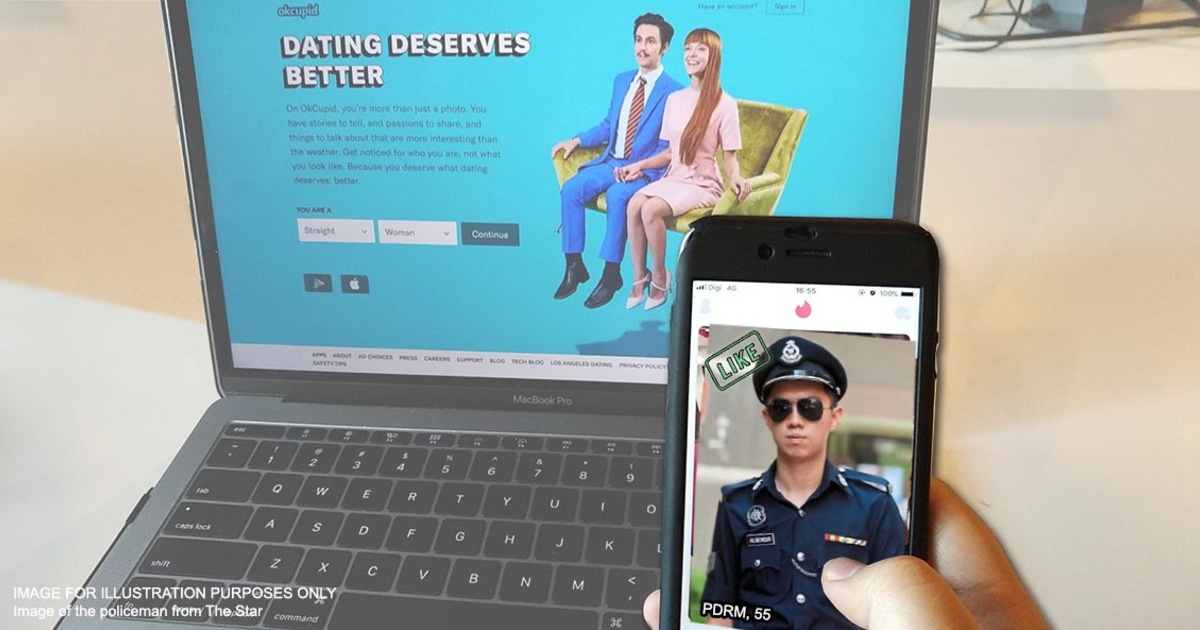 Malaysians are no strangers to searching for love through different means, including deploying oranges once a year. However as the pinnacle of the age of Internet looms in front of us, many have switched to the comfort of their phones by searching for companions through the use of dating apps such as Tinder, OKCupid, and TheSugarBook. As a matter of fact, online dating might be more common than you think. According to market research company YouGov, 3 out of 10 Malaysians have used some form of online dating service and 52% know at least one couple who met online.

With that being said, there have been cries of scammers and malicious individuals harming others through the use of online dating platform. Such scams, tricks, harms, and other foul concoctions indubitably fall on the wrong side of the law and you can lodge a police report if it happens to you. On the flipside, we might also be doing some of these without realizing that it might be against the law.

Nevertheless, prevention is always better than police intervention and with this in mind, we hooked up with the dudes over at TheSugarBook to help list down some common things to guard yourself against and how to do it.

[READ MORE: This Malaysian scam is scary because...you get called by the “PDRM” or “Bank Negara”]

Unfortunately, this type of fishing is not related to fishing for catfishes and they are definitely not as delicious when caught and cooked. On the online platform, the term “catfishing” is where the scammer adopts a fake persona (usually a hot guy or girl) to lure unsuspecting victims into a relationship.

While this can be done for innocent reasons, such as just to try out a platform without revealing your actual details or to live a fantasy life, it can escalate to a point where the relationship becomes too “real” to the unsuspecting victim and very hurtful when it’s exposed – such as in the case of Manti Te’o, an American Football player who was devastated that his online girlfriend died of Leukemia…. only to find out that she never actually existed.

On the other hand, it becomes a crime when the unsuspecting partner was cajoled into providing pictures or videos of them in compromising positions and the catfisher then blackmails them using said pictures/videos. You might think that this a remote issue that doesn’t affect many Malaysians, if at all but you would be surprised to learn that the number of Malaysians falling prey to this scam has been placed at 1,750 in 2013 and on the rise since 2015. If you would like to learn more about how this scam works, you can check out this article by Cilisos.

The next question is, how do you protect yourself against these catfishers?

The most straightforward way is to not send compromising photos or videos online. Aside from that TheSugarBook advises that you should never divulge your bank details or transfer funds to anyone.

Basically, it’s a breach of contract and the app providers are allowed to prevent you from using their site ever again.

To address it off the bat, it’s not that the offences mentioned above are not “serious”, but when we refer to “serious” crimes here, we are referring to crimes such as rape, child, grooming, assault, and so on. Rape and criminal force are crimes under section 375 and section 349 of the Penal Code respectively. As reported by R.AGE, internet-related rape has increased by a staggering 300% between 2010 to 2015. Depending on several factors, the punishment for these crimes can range from 3 months to 20 years in jail.

If you’re planning to meet up with someone you’ve met online, TheSugarBook suggests meeting in public places and arranging your own transportation (rather than be picked up by your date) and, if drinks are involved, know your limits and never leave your drink unattended.

Aside from the laws against rape and assault which have been long established in Malaysia, Malaysian lawmakers recently implemented a new law on “child grooming” after some undercover journalism by R.AGE exposed how children were being “groomed” for sex in Malaysia through online messenger platforms.

If the image of “grooming” that pops up in your mind is of your pet getting sent off to the groomers for a pampering session, you are very far off. According to Unicef (quoted from R.AGE), explains that “grooming” is when someone builds an emotional connection with a child for sexual abuse or exploitation, either online or in person. This then lead to the Malaysian government passing the Sexual Offences Against Children Act 2017. Section 12 makes it a crime for any adult to groom a child and this is punishable with a maximum of 5 years in prison and whipping.

Examples of grooming are included in the Act and in brief, they are:

Essentially grooming can happen whenever there is sexual communication with a child and a child is defined as a person under the age of 18. Aside from grooming, there is also another offence called statutory rape which can be found in the Penal Rape. Statutory rape happens when there is sexual intercourse with a girl is under 16 years old. This means that if you sleep with someone who is under 16, you can be guilty of rape even if she consented to the intercourse and regardless of whether you knew that she was underage.

With all this being said, the golden rule to bear in mind is…

Sometimes it may be hard to know if the person you are talking to is a scammer or an underage child but the golden rule is to always be careful in all your online engagements. Aside from that, most of the dating platforms have a reporting function for you to highlight to them any discrepancies that you see happening on the site.

If you have already become a victim of a scam, you can contact Cybersecurity Malaysia’s helpline at 1-300-88-299 or send a text to 019-266 5850. In cases of rape or assault, the Women’s Aid Organization (WAO) recommends going to the emergency room at a government hospital to be examined, or to a police station. Remember to not wash or clean yourself as that may remove any biological evidence left behind.