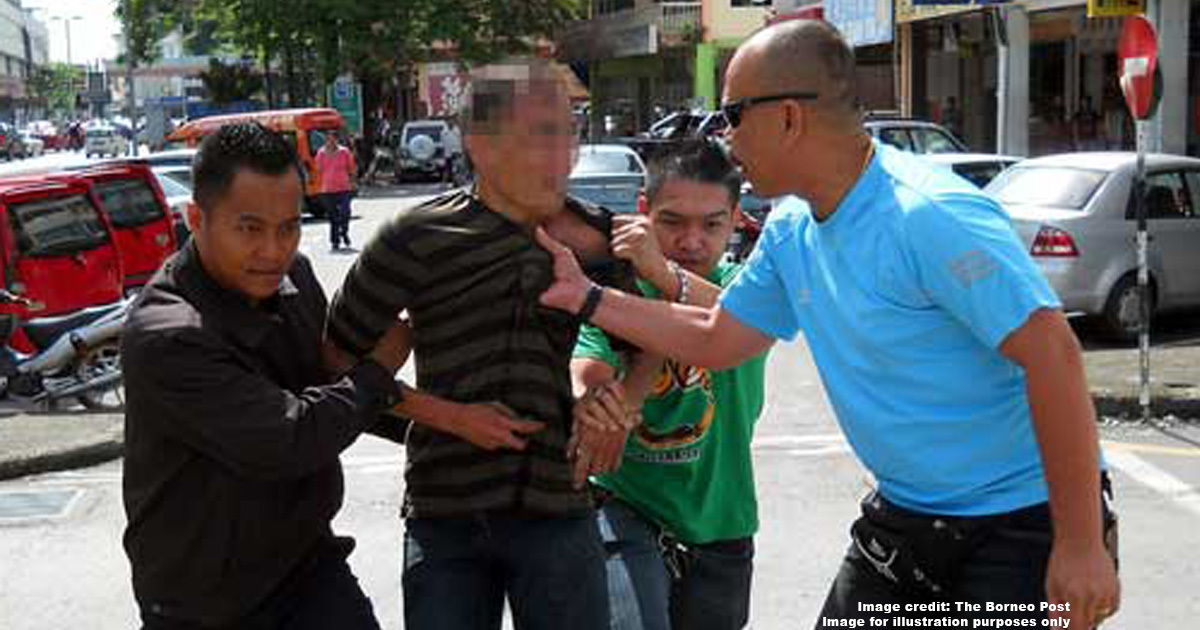 When can you perform a citizen's arrest in Malaysia, and how do you do it?

Imagine yourself witnessing a snatch theft. They just made off with a lady’s handbag, and you’re right there next to her as it happens. In this situation, we usually think that our only option is to call the police. But the thieves are already running away, can the police arrive on time to catch them?

If you’ve ever felt helpless in that situation, there’s actually something you can do about it.

You can perform a “citizen’s arrest”!

Section 27(1) - Criminal Procedure Code
“(1) Any private person may arrest any person who, in his view, commits a non-bailable and seizable offence or who has been proclaimed under section 44 and shall without unnecessary delay hand over the person so arrested to the nearest police officer or, in the absence of a police officer, take that person to the nearest police station.”

Here’s where we answer your questions about what “non-bailable” and “seizable offence” mean.

“Non-bailable” - Bail is basically a temporary release from police custody. You have to pay some money as security to make sure you return to court later on. If a crime is non-bailable, it means you are not allowed to get that temporary release. The list for which crimes are bailable and non-bailable is written in the First Schedule of the CPC.

“Seizable offence” - This means an offence for which the police don’t need to get a warrant to arrest you for. The exact list is also in the First Schedule of the CPC, but it usually covers more serious crimes like robbery, and hurting others. Here are some examples we shortlisted:

The recently passed Anti-Fake News Act classifies “spreading fake news” as a seizable offence, which as explained above, means that the police don’t need to get a warrant before arresting you. The general rule is that crimes with a maximum punishment of 3 years or higher will be considered seizable offences.

[READ MORE - But what exactly is considered “fake news”?]

But how should we arrest a suspect in the first place?

There’s a specific way provided by the law to perform the arrest - and it’s very important that you don’t go overboard. Tying up a thief to hand him to the police and beating him to punish him are very different from each other. Section 15 of the CPC says that when making an arrest:

[READ MORE - Why do some Malaysians get arrested for killing robbers in self defense?]

What do you do after arresting the suspect? Part of Section 27(1) of the CPC states that you must hand the suspect over to a police officer, or bring them to a police station. This means that you must either call the police right away and wait for them to arrive, or you can bring the suspect to the nearest police station. You’re not allowed to drag the suspect to a mamak and have a teh tarik while telling people your epic story about what happened. Do not allow anyone to harm the suspect either while waiting for the police to arrive - attacking a suspect who is no longer a threat is a crime in itself.

It may still be confusing which crimes you can actually perform a citizen’s arrest for, and it’s pretty difficult to memorise which exact situation you can do it in. As a general rule, if it looks like a person or property is being taken away or damaged, it’s serious enough to warrant a citizen’s arrest. But don’t worry if you arrested someone for a non-seizable offence by mistake, the police will have the power to deal with the suspect anyway.

Performing a citizen’s arrest is a right given by the law to us, but it’s still an option and not a duty. It goes without saying that, while we have all the right in the world (or at least the law) to tie a robber up, we may not have the ability to overpower the robber and keep him down.

To keep it practical and keep yourself safe, you shouldn’t push it if you don’t feel comfortable dealing with a potential criminal - it can be dangerous for yourself and maybe even others. There have been cases where people who tried stopping criminals have gotten injured badly, like this man who was run over by a car thief (warning: links to actual footage of the incident), and an elderly Malaysian who died trying to stop two snatch thieves.

But hey, if you can handle the situation, you might just end up being someone’s hero.