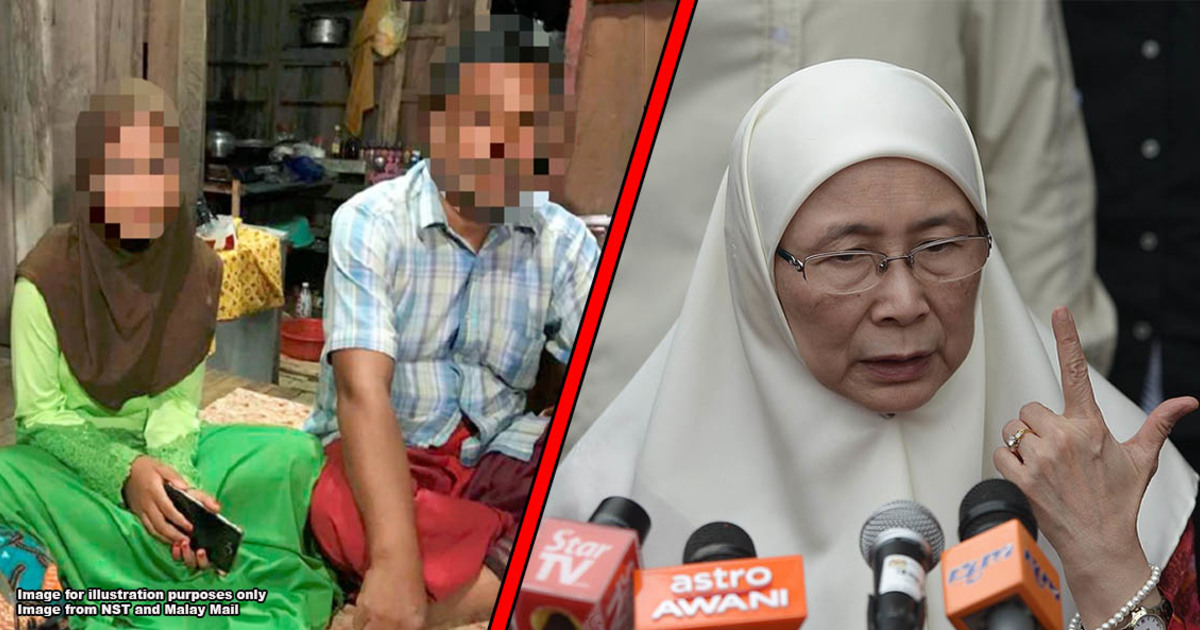 Malaysians have recently been in heated debates over the issue of child marriages. This issue was first highlighted when a Malaysian man married an 11 year old Thai girl in Southern Thailand and again resurfaced after news broke on the marriage of a 15 year child in Kelantan. Netizens were thrown into an outrage when DPM Wan Azizah said that the federal government does not have the jurisdiction to intervene in this child marriage and she was quoted in the following manner:

“But they were married by the Shariah court, so you have to also abide [by it] because it is also state regulations,” – DPM Wan Azizah, as quoted from The Malay Mail, 18 September 2018

If you’re frothing at your mouth now and thinking that this doesn’t make sense because they’re the government, they can change things, they make the laws, calm down and hang on tight because we’re about to take you for a ride.

Before we do, we would like to highlight that these two child marriages are slightly different because one involves a Malaysian child, married in Kelantan, with the permission of a Syariah judge while the other involves a Thai child, married in Thailand. Therefore, this article would focus on the child marriage that recently happened in Kelantan as it involved the application of Malaysian laws.

The first question is...

Who makes decisions on child marriages?

We have written an article on the legalities on child marriages and you can read more about it here. A child in Malaysia is legally defined in the Age of Majority Act 1971 as anyone who is below the age of 18.

Non-Muslims – 16 years and above (with permission)

For non-Muslims, marriages are governed by the civil law via the Law Reform (Marriage and Divorce) Act 1976 (“LRA 1976”). The law provides that any marriage between or with those who are under 18 years old would be void. However, the exception is that women who are under 18 but above 16, can get married if the Chief Minister agrees to such a marriage.

TLDR; women who are between the ages of 16 – 18 can get married if the Chief Minister agrees. This means that the minimum age for non-Muslims to get married is 16.

Muslims are governed by each State’s Syariah laws. This means that while non-Muslims have a “set” law throughout Malaysia, Muslims may be subject to differing laws, depending on which State they are in.

However, with this being said, it appears that the marrying age for each state remains the same:

TLDR; males below 18 and females below 16 require a Syariah Judge’s permission to marry. This means that there is technically no minimum age for Muslims to marry.

Simplifying it, child marriages in Malaysia can only happen if someone in authority (Chief Minister or Syariah Judge) has given their permission for it to take place.

Why can’t the government change the law?

The general public opinion is leaning towards the thought of if laws are created by the government, the government can just change the law. We have seen this happening when there was a change from GST to no GST to SST.

So, why did DPM Wan Azizah say that the government cannot intervene?

The Federal Constitution stands in the way

No, we’re not saying our Federal Constitution legitimises child marriages.

Before we delve deeper into this point, it has to be pointed out that while we may view the government as one entity, the Malaysian government, technically speaking, is divided into the Federal government and the respective State governments.

However, there are certain matters in which the State governments are given autonomy to enact their own laws, and these are areas which the Federal government cannot legislate on. For example, the state of Perak may ban Doreamon but Selangor may allow it; no Federal laws exist on this point (that we can find).

Another more practical example is how the State of Selangor subsidises water for Selangor but this initiative is not found in any other state.

To understand this divide in legislation, let’s take a look at Part VI of the Federal Constitution that talks about the distribution of legislative powers and zoom in to Article 74:

74. (1) Without prejudice to any power to make laws conferred on it by any other Article, Parliament may make laws with respect to any of the matters enumerated in the Federal List or the Concurrent List (that is to say, the First or Third List set out in the Ninth Schedule).

(2) Without prejudice to any power to make laws conferred on it by any other Article, the Legislature of a State may make laws with respect to any of the matters enumerated in the State List (that is to say, the Second List set out in the Ninth Schedule) or the Concurrent List.”

Some things are just up to the State governments to decide

The list in the Ninth Schedule is long and painful but as a quick summary and a few illustrative examples:

Eagle-eyed readers would have caught on that Islamic matters relating to marriage falls under the State purview and this means that the individual State gets to decide on how Muslim marriages are to take place. ASKLEGAL spoke to Fahri Azzat, a Syariah lawyer who confirms the same:

“Under the Federal Constitution, the Federal government has exclusive jurisdiction to make law over certain matters and the State too. There are matters where both can legislate. However, where it relates to matters concerning Islam - family, personal law, etc. - that is a matter for the State to enact laws - not Federal.” – Fahri Azzat, Syariah lawyer, in an interview with ASKLEGAL (emphasis added)

Long story short on the whole distribution of legislative power and all that is this – Parliament (Federal government) cannot make laws which fall under the purview of the State because the Constitution says so and the Constitution is meant to be the supreme law of the land.

Since Islamic law falls under the State control, this means that even if Parliament enacts a law criminalising child marriages, this may give rise to constitutional issues. Fahri explained it in the following:

“Parliament cannot make law that is exclusively within the jurisdiction of the State. It is up to each State has to amend their laws.

The Federal government can possibly enact a law criminalising child marriage but constitutional issues may arise from that. They can only make law on this for the Federal Territories - Putrajaya, KL and Labuan. So they can immediately enact a law and ban underage marriage for FTs.”

This is why DPM Wan Azizah was not wrong in saying that Malaysians similarly have to abide by State regulations; the nuances behind this issue on child marriage runs deep and is a blend of many overlapping considerations.

If you’re thinking that this means that this is the end of the road, it’s not because...

Some states are reviewing their laws

The Sultan of Selangor has announced that he gives his support to increase the marrying age for Muslims in Selangor to 18 years old. This is pretty important because Sultans are the heads of Islam in their respective States and their vote would go a long way in encouraging dialogue on child marriage and potentially changing their State’s laws on it.

The Federal Government are approaching the Malaysian Islamic Development Department (JAKIM) and the Chief Ministers of each State in order to propose and garner support for increasing the marrying age for Muslims.

If there’s one good thing that came out of the two recent child marriage controversies, it’s that it’s forcing both the Federal government and State governments to review their positions on this matter and take into account the public’s opinion on it. As history has always shown, the law changes to match current day sentiments and opinions. The best example of this would be the upcoming ban on the use of plastic straws due to public sentiments.

However, as DPM Wan Azizah said, and as you now understand, the matter is not that simple.