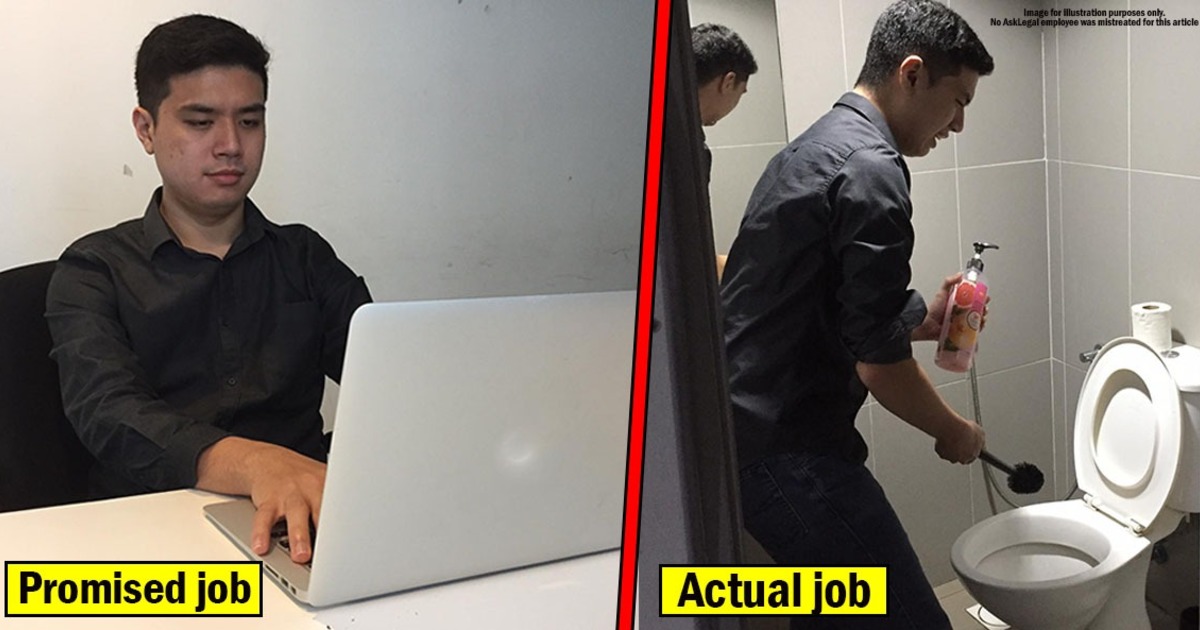 Can Malaysian companies change your job description...after you sign the contract?

Imagine this: You finally landed a job as a sales executive at a local company. Everything has been going great for almost 6 months—you have an amazing boss, you manage to reach your monthly targets and you’re finally getting comfortable in your position. But this didn’t last very long. You eventually find yourself doing other things...that are not even part of your job scope.

You confront your boss about it, and he tells you that it’s all part of your position as a sales executive. But you have your doubts now since it was not what you signed up for in your employment contract. The worst part is, you’re not even getting paid for it!

A Malaysian woman sued her company for it

To sum this all up, the employee was asked to transfer from her current position to a new position which she wasn’t qualified for in the first place. So the employee decline the offer that was made. However, her company had different plans for her non-acceptance: They decided to fire her for not accepting the transfer—which led to this huge lawsuit that she ended up winning RM 173,990.40 from.

The company’s argument for firing her was, that she had abandoned her job without giving substantial notice and failed to respond to the letter of transfer given by the company.

So when the dispute came to court, 2 things had to be decided.

SPOILER ALERT: The court agreed with the employee

The Industrial Court found 2 issues that had to be decided on in this case:

A claim of constructive dismissal can be made under Section 20(1) of the Industrial Relations Act 1967, which states that no employees shall be terminated without just cause and excuse:

“Where a workman, irrespective of whether he is a member of a trade union of workmen or otherwise, considers that he has been dismissed without just cause or excuse by his employer, he may make representations in writing to the Director General to be reinstated in his former employment; the representations may be filed at the office of the Director General nearest to the place of employment from which the workman was dismissed.”

Based on the law above, the court in this case concluded that the employee had a claim under constructive dismissal. The court went on to say that the dismissal was done without a just cause or excuse. The transfer of the employee was considered unfair as the job description was not what her employment contract mentioned.

[READ MORE: Can Malaysian law protect you if your boss forces you to resign?]

Also, here’s an excerpt from a letter that was admitted in court, which shows that the employee had actually told her employer that the terms of the transfer and re-designation of her job, was unfair:

“The proposed transfer was to a different company, to do totally different scope of work, in a totally different industry....The job description for the position of Sales and Property Manager specifically required that I must have the education competency of at least a Diploma/Degree in Hotel Management with at least 5 years related working experience. You know very well that I do not possess such qualifications or exposure...”

This showed the court that the employee was aware of the unfairness in the transfer, and even went on to argue that her contract of employment never mentioned that she would be transferred to a totally different job scope.

So if you’ve ever been re-designated to do something beyond your job scope, here’s something to take note of:

Companies cannot force employees to take on a new role

Generally, companies have the right to transfer employees within the company. But in this case, the companies involved are 2 separate companies and the job description was not what was stated in the employee’s contract of employment.

Therefore, employer’s must ensure that any transfer of employees should not significantly change the job description in the employment contract, is not a demotion and isn’t done in bad faith towards the employee.

And if you’re an employee who feels that you have been unfairly terminated for refusing to accept a transfer or new job scope, you may bring a case to the Industrial Court. Section 30(5) of the Industrial Relations Act 1967 provides:

If the court finds that you have been unfairly dismissed, you’re entitled to certain benefits. Employees who have been unfairly dismissed are entitled to claims stated under the Employment (Termination and Lay-off Benefits) Regulations 1980. However, some companies have their own policies and regulations on termination benefits. So, it would be best to check with your company first.