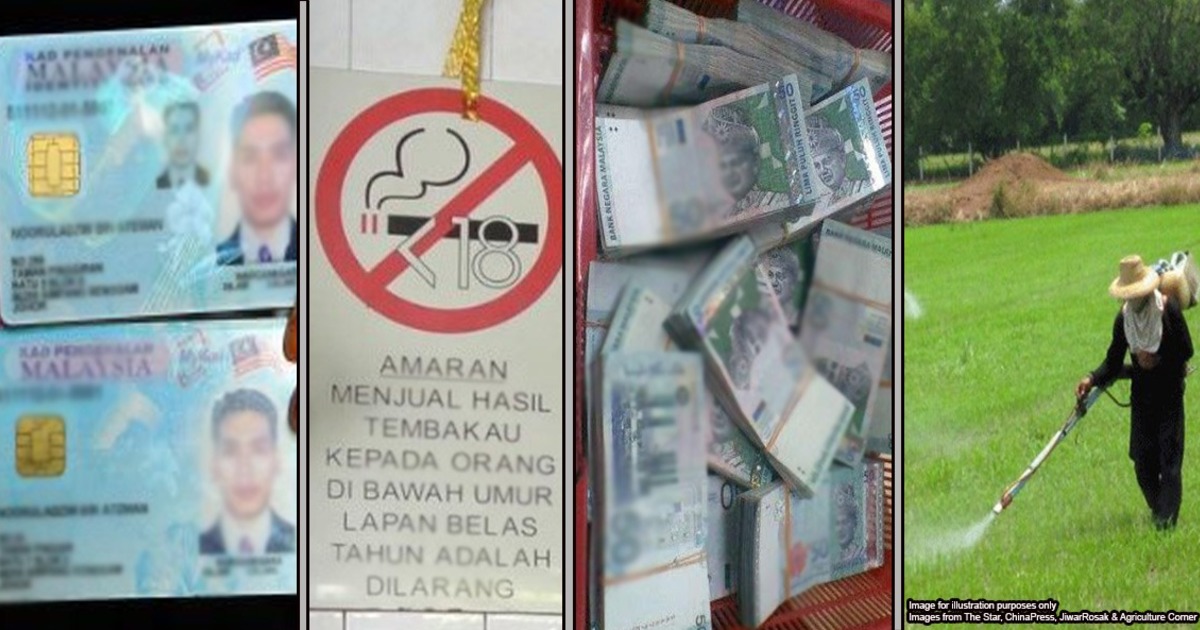 Here are 4 things that used to be legal in Malaysia... but are illegal now

If you were to trace back on how Malaysia's laws are what they are today, you'd have to look back at least 600 years into the past. During that time, our laws were shaped by so many influences such as religion, the Malacca Sultanate and even the British rule in Malaysia. Today, most of our settled laws today are largely influenced by British law, but some of our cultural customs have also made it into our law books.

After we gained independence from the British, many laws were kept, but some were tweaked and even abolished because they weren’t relevant to us anymore. And so to fill in some of these legal gaps, we also created a few new laws of our own. For instance, there weren’t any laws on children smoking back then. While this may have been morally wrong, it couldn’t be said to be illegal… simply because there was no law against it.

So, the Malaysian government eventually passed a law banning the sale and consumption of cigarettes by minors. There have been several changes like this over time, but let’s look at 4 specific laws that were changed some years ago.

1. Having your IC with you at all times

If you’re a Malaysian, you’d most definitely have a MyKad, an identification card that has all your information stored in it. The MyKad was only introduced in 2001, so some of you might have also had the ‘old IC’ which existed before the MyKad. Now, this old IC came about in 1948, even before Merdeka! These ICs were issued during the emergency period, so it’s not difficult to see how important it was back then.

But before this IC came about, the government still kept records of who was in the country, long before that. In 1895, there were separate laws that governed the births, deaths, burials, marriages and divorces that took place in Malaysia.This law operated under the Federal Council, a body created by the British to be in charge of Malaya’s laws. The task of managing registration laws were then passed on to the National Registration Department, or JPN as is it known today, when it was finally set up. This very law on registrations made it mandatory for births, deaths, marriages and divorces in the country to be registered. However, there wasn’t a penalty specified if someone didn’t have these documents with them all the time, especially the IC.

This did change, though, and going out without your IC did become an offence. But it took a long time before you could get fined for not having your IC with you, because it was only in 1999, when the National Registration Regulations was passed. Under Section 25(1)(n) of these regulations, you can be fined up the RM 20,000 or jailed for a maximum of 3 years if you don’t have your IC on you when an abang or kakak polis asks to see it.

If you’re wondering whether anyone has actually been caught under the law for this, the answer is yes. Here are some cases:

You can see that the penalty given varies from case to case, and a lot of it depends on the circumstances of when the IC was asked for. Also, it’s important to note that this law applies whether you just forgot to bring your IC along, or you just refuse to show it to the police officer.

If you go to a mamak or basically any convenience store that sells cigarettes, you’d most definitely see the sign above behind the counters. We definitely wouldn’t want children to be smoking or even buying cigarettes for someone else, so a sign a like this does make sense.

But some of our readers here may remember being sent to the shop by their parents to buy a packet or two for them. Shopkeepers didn’t usually say anything, and they would just sell it to the child without any reservations. And that’s because, up till about 26 years ago, there were actually no laws against selling cigarettes to a minor.

So, only in 1994 was a law passed where the sale of cigarettes to anyone under the age of 18 became an offence. There’s no specific Act for this at the time, but a list of regulations regarding smoking was drafted in 1993, and this then took effect in 1994. These regulations were known as the Control of Tobacco Product Regulations 1993 and besides banning minors from purchasing cigarettes (and it being sold to them), it also banned the distribution of free cigarette samples and setting aside smoke-free zones, among other things. Unfortunately, a copy of these regulations is not publicly available, but you can see some of the changes made to it over the years here.

Then later, this ban on the sale of cigarettes to minors was incorporated into the Food Act 1983. To clarify, the Food Act existed since 1983, but this ban on minors smoking was added only after 1994, and it can be found in Section 36(2) of the Act which says:

(e) the prohibition against the sale to, or having in possession, buying, smoking or chewing by, persons below the age of eighteen years of tobacco products;

The Act does not mention what the penalty is for parents who make their kids buy them cigarettes, but a shopkeeper who sells cigarettes to a child will be fined a maximum of RM10,000 or be jailed for a maximum of 2 years. The Act says that the same penalty applies to a child who smokes, but a minor may receive a different punishment, depending on the circumstances of the case.

[READ MORE: In Msia children CAN be sent to jail, but only for certain crimes. Here's what they are]

If you don’t know what this is, you’re too young we’ll give you a brief overview. Kootu is basically a money saving scheme where a group of people contribute an amount of money every now and then, and each member takes turns to spend the sum of money for their personal use. That way, everyone gets to enjoy a bigger sum of money although they only contributed a small share. Seems pretty harmless, right? Well, yes and no.

Kootu was a practice that originated from India, but this practice was eventually followed by other ethnic groups in Malaysia. Friends in small communities saw kootu as a way to allow them to cover bigger expenses each month, while not having to take loans from banks. If they had to take loans, they would have to pay an interest as well.

As time went by, what was an innocent practice among friends and neighbours turned into a business. People started setting up kootu businesses, and they were also charging a fee for it… which totally defeated the purpose of having a kootu fund.

So, in 1970, Parliament passed the Kootu Funds (Prohibition) Act to stop kootu businesses from sprouting. Anyone found guilty of this was fined a maximum of RM5,000, or they could be sent to jail for a maximum of 3 years. Basically, it’s fine to have a kootu fund with your circle of friends but you can’t turn it into a business and you can’t charge an interest on the money.

[READ MORE: What are "kutu funds" and why are they illegal in Malaysia?]

4. The use of pesticides

Pesticides. We don’t think about them, and we probably don’t know that much about them. But it IS a known fact that pesticides are used to kill insects in plantations, and too much of it can have adverse effects on our health.

Pesticides in themselves aren’t bad, and people have been using natural pesticides for thousands of years. But chemical pesticides were only invented around the start of World War II. We’re not sure when exactly chemical pesticides reached Malaysian soil as there are no proper records of it, but it is safe to say that they’ve been around for awhile.

It was only in 1974 that strict laws on pesticides were introduced, through the Pesticides Act. Under this law, there was a restriction on how much pesticide could be used on food, and what pesticides were allowed in the first place. But not only that, this Act also states that those who manufacture, sell and even store pesticides need to have licenses for it. It’s a super lengthy Act, with laws for even how officials should deal with a case where someone has died from pesticide poisoning.

So, good news, now you don’t have to worry about whether your chap fan veggies are safe to eat.